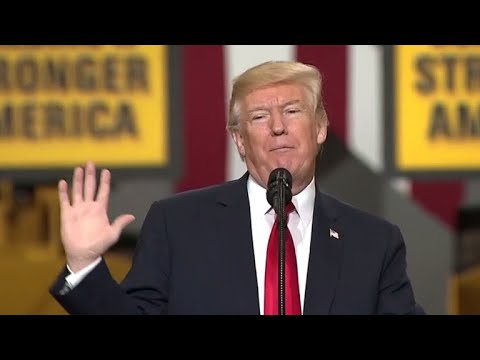 Trump in the course of a speech on infrastructure in Ohio, yesterday, observed that the US was near to completely defeating the ISIL “caliphate” and that the US would be withdrawing from Syria very soon.

Here is what he said:

Since, as Politico notes, Trump’s foreign policy team on his cabinet– Secretary of Defense James Mattis and Secretary of State Mike Pompeo– and his new national security adviser, John Bolton– all disagree that the US is coming out of Syria very soon, Trump’s confident assertion raised eyebrows in Washington. (In fact, of course, ever since Trump was sworn in in January, 2017, eyebrows have been more or less permanently raised in Washington).

The US has admitted having 2,000 special operations forces embedded with leftist Kurdish YPG fighters in northern and eastern Syria, and deploying them along with allied Arab clans in the Syrian Democratic Forces against ISIL. The strategy was developed by the Obama administration and was continued by Trump and Mattis, and has been wildly successful, as Trump says. The ISIL stronghold of Raqqa has fallen, as have other towns held by the terrorist group, and only pockets of stragglers remain to be mopped up. In fact, some of the struggle in Eastern Syria is now over who will do the mopping up, especially in areas rich in oil or gas, and one recent major engagement pitted the US Air Force against some 200 Russian mercenaries working with the Damascus regime and seeking an oil-rich former ISIL territory.

The US has no obvious strategic interests in Syria (it has very little oil or other resources and its GDP before the war was in the region of Sri Lanka or the Dominican Republic).

The Pentagon, however, is notorious for mission creep. Now that ISIL is virtually destroyed as a territorial entity, Mr. Mattis has begun talking about the need to be vigilant lest it return, hence a long US troop presence is needed in his view. Before he was summarily twitter-fired, former secretary of state Rex Tillerson gave a speech in which he outlined several US goals in Syria, some of them self-contradictory. It was clear that he and Mattis wanted to use the US toehold in the Jazira of northeast Syria to somehow block Iran in Syria and to keep pressure on the Assad regime to open up to elections or ultimately even to step down.

These goals of the pragmatic hawks in the Trump administration differ entirely from those of the president himself, as his remarks yesterday made clear.

The objectives of the Mattis-Pompeo-Bolton troika, moreover, are both unrealistic and directly in contradiction to two regional players.

Russia needs Iran and its militia allies in its push to roll up the remaining rebel forces. Letting the US force Iran out of Syria or implement regime change in Syria is unacceptable to Russian president Vladimir Putin. 2000 US spec ops personnel can’t hope to be effective in that regard, and it is not clear that the Syrian Kurds would want to take on that role, since they are much more afraid of Sunni extremists than of Iran and may need the latter against the former.

When Trump says “let the other people take care of” Syria, he presumably means Russia (he said this on the campaign trail many times).

You have to wonder if Trump is caving into Russia pressure on Syria. The Russians have been extremely vociferous in the past month, reacting against US ambassador to the UN Nikki Haley’s threats that the US will bomb Damascus and warning of serious consequences.

Likewise, Turkey, a NATO ally, objects strenuously to the Mattis strategy of allying with Syria’s leftist Kurds. Turkey invaded Afrin, a YPG-controlled Kurdish enclave in the west of north Syria, in part as a way of putting pressure on the Pentagon to withdraw and give up its plan to train and arm a 50,000 man border security force from among the YPG fighters– a plan that Ankara sees as a mortal threat to Turkey. (Turkey’s president Tayyip Erdogan is fighting a PKK (Kurdistan Workers Party) insurgency in eastern Turkey, seeing them as secessionists and terrorists, and makes no distinction between the PKK and the Syrian YPG).

Trump has admitted that he is vulnerable to Turkish pressure because of his properties in Istanbul.

As always in the age of Trump, we are left to wonder about the significance of the president’s remarks. Is he announcing a policy reversal and firing a shot across the bow of Mattis-Pompeo-Bolton that he may have been inveigled into hiring them by the Republican establishment but he won’t put up with their dragging him into a major Iraq-style war? Is he once again caving to Russian pressure? Is the old Michael Flynn connection to Turkey still somehow operating through other channels?

Or is he just pleasing his infinitely gullible base, lying to them as he lies to them about his tawdry affairs?