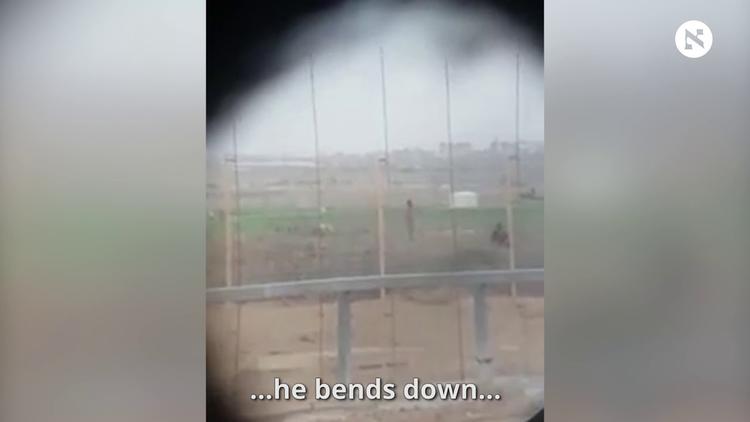 As the shot is fired and a Palestinian man falls, one soldier laughs and says: “Wow, what a video! Yay!” In the video the soldier can also be heard celebrating the shot calling the video a “legendary clip,” while insulting the fallen Palestinian and calling him “son of a whore.”

The video, which emerges after 31 Palestinians have been killed in Gaza by sniper bullets shot from within Israel, have gained international condemnation. According to Gaza’s Health Ministry over 1,000 Palestinians participating in the Great March of Return have been wounded by live ammunition.

In an official statement Tuesday the Israeli occupation army announced the action took place on Dec. 22, 2017 and happened in the context of a “response to a violent riot,” accusing the man who was standing near the border fence in no apparent act of violence of being suspected of organizing violent incidents.

Furthermore, the statement said the soldier who filmed the video was being investigated for “unauthorized filming of an operational event and distribution of the filmed material.” No investigation on the action of shooting an unarmed man while protesting was announced.

Meanwhile the soldiers in the video were defended and praised by senori Israeli officials. Education Minister Naftali Bennett, head of the ultra-conservative Jewish Home Party, called on Israelis not to criticize the soldiers arguing “They guard our lives, We guard them. We do not abandon soldiers.”

Israeli human rights organization B’tselem issued a statement shortly after the video was published saying “Incidents such as the one in the video published today occurred hundreds of times over the past few weeks in the Gaza Strip, causing death and injuries — with the full support of policy makers and top military officials.” The organization also highlighted the “illegal command” ordering soldiers to shoot people who pose no imminent threat to life or injury.

The United Nations Human Rights Council has repeatedly reminded Israel that imminent threat to life or injury is the only justification for the use of lethal force by security forces.

However, Israeli politicians and policymakers continue to defend actions that violate international humanitarian law and the Fourth Geneva Convention on the protection of civilians.

Public Security Minister Gilan Erdan said critics of the soldiers behavior are “crazy,” arguing that they were “under stress.” In previous statements, Defence Minister Avigdor Lieberman, claimed there are “no innocent people in Gaza,” justifying the indiscriminate use of lethal force against unarmed Palestinians.

Jamal Zahalka of the Joint List, a political alliance of four Arab-dominated parties in Israel, said the video “indicates to the rule. Israeli snipers killed unarmed Palestinian protesters in cold blood who were participating in a non-violent protest.” According to Zahalka, the public defending and praising for the actions shown in the video by Israeli ministers and politicians promote such behavior.

Breaking the Silence, a group of former occupation army members who denounce and expose abuses carried out against Palestinians, agrees with Zahalka’s statement. They refuted the army’s statement saying the video is from several months ago, highlighting “It isn’t from several months ago; it has been like this for 51 years,” since Israel gained control of the West Bank and Gaza, in 1967.

The March of Return is scheduled to last until May 15, when Palestinians commemorate 70 years of the Nakba, when over 700,000 Palestinians were expelled or fled from their towns and cities to safeguard their lives after the foundation of the State of Israel. The United States is expected to move its embassy from Tel Aviv to the occupied city of Jerusalem on May 15.