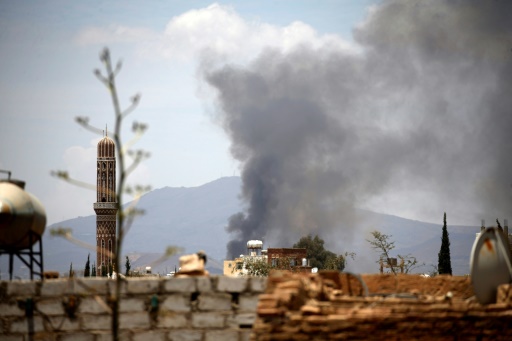 Sanaa (AFP) – Dozens were killed and wounded in an air raid on a wedding party in Yemen, local officials said Monday, with Huthi rebels blaming a Saudi-led military coalition.

The Iran-backed rebels who control most of northern Yemen blamed Sunday’s attack on the Arab coalition that backs the country’s government, in the latest in a string of such incidents.

Medical sources and local officials put the number of dead between 22 and 33, with at least 40 to 50 wounded, while the exact circumstances of the raid remained unclear.

Rescue teams said the wedding was being held in the Huthi-controlled Bani Qais area of Hajjah province, north of Sanaa, when jets carried out the raid.

Doctors Without Borders (MSF) said on Twitter that a hospital it supports in Hajjah received at least 45 patients, including 13 children, wounded in the air strikes, which it said were “among the most devastating in the area in recent months”.

A local official told AFP that at least 23 civilians, including women and children, were killed and 36 others wounded in the attack.

The official, speaking on condition of anonymity, said a double air strike on the crowded party venue had left a number of dead bodies buried beneath the rubble.

Huthi-run Al-Masirah television said at least 33 people, including women and children, were killed and as many as 55 people wounded.

The Saudi-led coalition’s spokesman Colonel Turki al-Malki did not immediately respond to a request for comment.

Iran, which is accused of supplying arms to the Shiite Huthis, swiftly condemned the raid.

“The escalated bombardment of residential areas proves the desperation and inability of the invaders in achieving their goals,” foreign ministry spokesman Bahram Qassemi said in a statement.

The Saba news agency, controlled by the rebels, branded the attack “the new genocidal crime of the Saudis”.

It was not the first deadly strike on a wedding during Yemen’s conflict, which has killed nearly 10,000 people and wounded 54,000 others since the coalition intervened in March 2015 to battle the Huthis and restore Yemen’s internationally recognised government to power.

Violence has also hit funerals. In October 2016, 140 mourners were killed in an air strike on a house in Sanaa.

Elsewhere in Yemen on Monday, five pro-government soldiers were killed and 19 wounded in clashes with jihadists in the southern city of Taez, medics said.

Fighting in the city’s Jahmaliah district came after the governor of Taez launched an operation against jihadists he suspected were behind the murder of an aid worker with the International Committee of the Red Cross over the weekend.

The Lebanese aid worker, Hanna Lahoud, was shot dead in Taez on Saturday by unidentified assailants who sprayed his ICRC vehicle with bullets.

Jahmaliah is controlled by pro-government forces but there is a jihadist presence in the area, a police officer told AFP.

Yemen’s conflict has sparked what the United Nations has called the world’s worst humanitarian crisis.