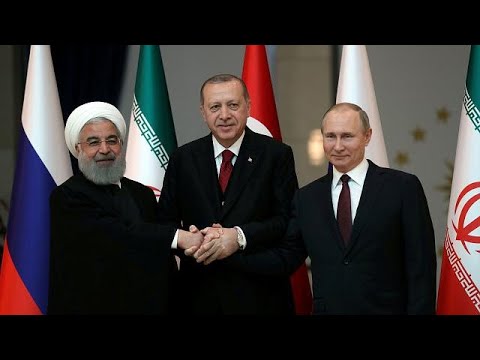 The unusual triple alliance coming out of Syria could change the regional balance of power and unhinge NATO — if it holds together at all.

The unusual triple alliance coming out of Syria could change the regional balance of power and unhinge NATO — if it holds together at all.

An unusual triple alliance is emerging from the Syrian war — one that could alter the balance of power in the Middle East, unhinge the NATO alliance, and complicate the Trump administration’s designs on Iran.

It might also lead to yet another double cross of one of the region’s largest ethnic groups, the Kurds.

However, the “troika alliance” — Turkey, Russia, and Iran — consists of three countries that don’t much like one another, have different goals, and whose policies are driven by a combination of geo-global goals and internal politics.

In short, “fragile and complicated” doesn’t even begin to describe it.

How the triad might be affected by the joint U.S., French, and British attack on Syria is unclear, but in the long run the alliance will likely survive the uptick of hostilities.

Meeting in Ankara, the parties pledged to support the “territorial integrity” of Syria, find a diplomatic end to the war, and to begin a reconstruction of a Syria devastated by seven years of war. While Russia and Turkey explicitly backed the UN-sponsored talks in Geneva, Iran was quiet on that issue, preferring a regional solution without “foreign plans.”

“Common ground,” however, doesn’t mean the members of the “troika” are on the same page.

Turkey’s interests are both internal and external. The Turkish Army is currently conducting two military operations in northern Syria, Olive Branch and Euphrates Shield, aimed at driving the mainly Kurdish People’s Protection Units (YPG) out of land that borders Turkey. But those operations are also deeply entwined with domestic Turkish politics.

Erdogan’s internal support has been eroded by a number of factors: exhaustion with the ongoing state of emergency imposed following the 2016 attempted coup, a shaky economy, and a precipitous fall in the value of the Turkish lira.

Rather than waiting for 2019, Erdogan called a snap election last week, and beating up on the Kurds is always popular with right-wing Turkish nationalists. Erdogan needs all the votes he can get to implement his newly minted executive presidency that will give him virtually one-man rule.

Driving a Wedge in NATO

To be part of the alliance, however, Erdogan has had to modify his goal of getting rid of Syrian President Bashar Assad and to agree — at this point, anyhow — to eventually withdraw from areas in northern Syria seized by the Turkish Army. Russia and Iran have called for turning over the regions conquered by the Turks to the Syrian Army.

Moscow’s goals are to keep a foothold in the Middle East with its only base, Tartus, and to aid its long-time ally, Syria. The Russians aren’t deeply committed to Assad personally, but they want a friendly government in Damascus. They also want to destroy al-Qaeda and the Islamic State, which have caused Moscow considerable trouble in the Caucasus.

Russia also wouldn’t mind driving a wedge between Ankara and NATO. After the U.S., Turkey has NATO’s second largest army. NATO broke a 1989 agreement not to recruit former members of the Russian-dominated Warsaw Pact into NATO as a quid pro quo for the Soviets withdrawing from Eastern Europe. Since the Yugoslav War in 1999, the alliance has marched right up to the borders of Russia. (The 2008 war with Georgia and 2014 seizure of the Crimea were largely a reaction to what Moscow sees as an encirclement strategy by its adversaries.)

Turkey has been at odds with its NATO allies around a dispute between Greece and Cyprus over sea-based oil and gas resources, and it recently charged two Greek soldiers who violated the Turkish border with espionage. Erdogan is also angry that European Union countries refuse to extradite Turkish soldiers and civilians who he claims helped engineer the 2016 coup against him. While most NATO countries condemned Moscow for the recent attack on two Russians in Britain, the Turks pointedly did not.

Turkish relations with Russia have an economic side as well. Ankara wants a natural gas pipeline from Russia, has broken ground on a $20 billion Russian nuclear reactor, and just shelled out $2.5 billion for Russia’s S-400 anti-aircraft system.

The Russians don’t support Erdogan’s war on the Kurds and have lobbied for the inclusion of Kurdish delegations in negotiations over the future of Syria. But Moscow clearly gave the Turks a green light to attack the Kurdish city of Afrin last month, driving out the YPG that had liberated it from the Islamic State and Turkish-backed al-Qaeda groups. A number of Kurds charge that Moscow has betrayed them.

Will the Russians stand aside if the Turkish forces move further into Syria and attack the city of Manbij, where the Kurds are allied with U.S. and French forces? And will Erdogan’s hostility to the Kurds lead to an armed clash among three NATO members?

Such a clash seems unlikely, although the Turks have been giving flamethrower speeches over the past several weeks. “Those who cooperate with terrorists organizations [the YPG] will be targeted by Turkey,” Turkish Deputy Prime Minister Bekir Bozdag said in a pointed reference to France’s support for the Kurds. Threatening the French is one thing, picking a fight with the U.S. military quite another.

Of course, if President Trump pulls U.S. forces out of Syria, it will be tempting for Turkey to move in. While the “troika alliance” has agreed to Syrian “sovereignty,” that won’t stop Ankara from meddling in Kurdish affairs. The Turks are already appointing governors and mayors for the areas in Syria they have occupied.

Keeping the U.S. at Bay

Iran’s major concern in Syria is maintaining a buffer between itself and the very aggressive U.S., Israeli, and Saudi alliance, which seems to be in the preliminary stages of planning a war against the second-largest country in the Middle East.

Iran is not at all the threat it’s been pumped up to be. Its military is miniscule and talk of a so-called “Shiite crescent” — Iran, Iraq, Syria, and Lebanon — is pretty much a western invention (although the term was dreamed up by the Sunni king of Jordan).

Tehran has been weakened by crippling sanctions and faces the possibility that Washington will withdraw from the nuclear accord and re-impose yet more sanctions. The appointment of National Security Adviser John Bolton, who openly calls for regime change in Iran, has to have sent a chill down the spines of the Iranians.

What Tehran needs most of all is allies who will shield it from the enmity of the U.S., Israel and Saudi Arabia. In this regard, Turkey and Russia could be helpful.

Iran has modified its original goals in Syria of a Shiite-dominated regime by agreeing to a “non-sectarian character” for a post-war Syria. (Erdogan has also given up on his desire for a Sunni-dominated government in Damascus.)

War between the U.S. or its allies and Iran would be catastrophic, an unwinnable conflict that could destabilize the Middle East even more than it is now. It would, however, drive up the price of oil, currently running at around $66 a barrel.

Saudi Arabia needs to sell its oil for at least $100 a barrel, or it will very quickly run of money. The ongoing quagmire of the Yemen war, the need to diversify the economy, and the growing clamor by young Saudis — 70 percent of the population — for jobs requires lots of money, and the current trends in oil pricing are not going to cover the bills.

War and oil make for odd bedfellows. While the Saudis are doing their best to overthrow the Assad regime and fuel the extremists fighting the Russians, Riyadh is wooing Moscow to sign on to a long-term OPEC agreement to control oil supplies. That probably won’t happen — the Russians are fine with oil at $50 to $60 a barrel — and are wary of agreements that would restrict their right to develop new oil and gas resources.

The Saudis’ jihad on the Iranians has a desperate edge to it, as well it might. The greatest threat to the kingdom has always come from within.

The rocks and shoals that can wreck alliances in the Middle East are too numerous to count, and the “troika” is riven with contradictions and conflicting interests. But the war in Syria looks as if it’s coming to some kind of resolution — and at this point Iran, Russia, and Turkey seem to be the only actors who have a script that goes beyond lobbing cruise missiles at people.

FPIF columnist Conn Hallinan can be read at dispatchesfromtheedgeblog.wordpress.com and middlempireseries.wordpress.com.

Euronews from 2 weeks ago: “Iran, Turkey and Russia meet for Syria summit”