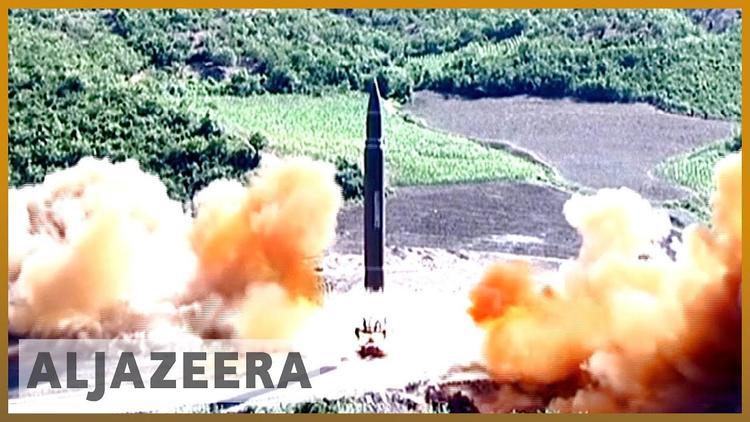 North Korea suspends nuclear testing ahead of talks with Trump

North Korea has surprised the international community by announcing it is suspending its testing of nuclear weapons and intercontinental ballistic missiles ahead of talks between US President Donald Trump and the North Korean leader Kim Jong-un. The isolated communist regime said that the moratorium on testing would go into immediate effect according to state run media, and also comes less than a week before Kim is due to meet South Korean President Moon Jae-in at a summit in the Korean peninsula’s demilitarised zone. The good will gesture might be intended to signal the North Korean regime is negotiating in good faith as it goes some way to meeting US demands for a denuclearisation of the Korean peninsula.

North Korea last tested a nuclear weapon in September 2017, in an explosion experts claimed as highlighting the most powerful device it had yet revealed. But the North Korean regime is also under heavy US sanctions which have put significant economic pressure on the country’s fragile economy. Critics of the negotiations have argued that the regime will attempt to string the prospect of verifiable dismantlement for years past Trump’s presidency, confident that the technical sophistication of its nuclear and missile programmes is now advanced enough that it can afford a decent period of talks aimed at economic and sanctions relief.

Given the furious war of public insults that have been exchanged between President Trump and North Korean dictator Kim Jong-un, many observers had believed that the talks would never take place between the two thin-skinned leaders. Moreover the recent appointment of arch-hawk and neoconservative stalwart John Bolton as the new National Security Advisor of the United States by President Trump had seemed to signal the administration was taking a more hardline turn in its foreign policies.

A former Bush-era administration veteran, Bolton has openly called for preemptive strikes on both North Korea and Iran in the recent past and defends the Bush administration’s decision to attack Iraq in 2003 to this day. His rise to prominence within the Trump administration almost certainly means that the US will exit its nuclear deal with Iran in May for example, when the president has said he will refuse to extend critical US sanctions relief that is part of the US bargain with the Iranian regime unless he is satisfied by amendments he has demanded allies like Britain make to the agreement. Surprisingly however, Pyongyang does not seem to have been put off from talks with the Trump administration after watching it demolish another painstakingly crafted nuclear agreement with a longstanding US rival; a meeting between Trump and Kim is still scheduled to go ahead at some point this summer, although an exact date has not yet been set.

The North’s commitment to peaceful talks and its surprise decision to suspend its provocative programme of nuclear and missile tests could be a ruse ahead of scheduled talks between North and South Korea’s leaders of course. Or it could be an attempt to buy some breathing space while the communist leadership assesses US intentions; according to the South Korean leadership, Pyongyang has suddenly expressed a desire for the “complete denuclearisation” of the Korean peninsula, surprisingly without any preconditions such as demanding the withdrawal of US troops, something which has long blocked serious attempts at negotiations under previous American administrations.

While it is hardly likely that the regime in Pyongyang is truly serious about giving up its nuclear programme at such an advanced stage, after decades of stalemate it could be that a window to achieve some form of verifiable containment of the North Korean nuclear weapons arsenal has briefly opened. China, North Korea’s only major friend and ally, would certainly be in favour of diffusing the issue as long as the current regime was allowed to stay in power (especially if it eventually meant negotiating an official end to the Korean war and the subsequent departure of US troops from South Korea).

If so it is ironic that nuclear talks would be progressing over North Korea’s far more advanced arsenal around the same summer as America’s permanent crisis with a non-nuclear Iran, whose agreement with world powers President Trump has called the “worst deal ever”, is heating back up again. Some 70 percent of Iranians back their country acquiring nuclear weapons and the missiles to deliver them, according to a recent poll.

A smaller majority of Iranians still back Iran’s deal with America even though they say that it hasn’t delivered the promised economic benefits (largely because so many foreign businesses remain wary of entering the Iranian market whilst President Trump remains in the White House). Sticking the agreement with Tehran seems unacceptable to the war hawks currently in the ascendency within the Trump administration however; unlike isolated North Korea, whose nuclear programme is the only major security issue America has with it, the list of American grudges against Iran is considerably longer. Among others they include Iranian sponsored killings of US servicemen during the wars in Iraq and Afghanistan, Tehran’s support for terrorist groups and its threats to Israel, and Iran’s support for Syria’s bloodsoaked dictatorship.

A look at the contrasting approaches the Trump administration has taken to the two countries is instructive; put simply North Korea is more of a threat but less of a problem than Iran right now. While its communist regime has no wish to commit suicide by attacking America first, it can probably hit multiple US cities, overseas possessions or military bases with its present intercontinental ballistic missile technology and might already have the ability to fit a nuclear warhead to some of those missiles.

Meanwhile any conventional fighting that would take place in a theoretical second Korean war would be devastating to South Korea’s capital Seoul, and the Pentagon estimates that casualties during any conflict would run into the millions; put simply, it isn’t worth the risk to America if a solution short of war can be negotiated, and the president who succeeded in doing would be lauded—a not insignificant attraction to a man of President Trump’s character.

Non-nuclear Iran meanwhile is much less of a military threat to America,

With the talks with North Korea to point to if anyone complains about its belligerence abroad, figures in the Trump administration might consider now the time to launch the air war on Iran that has long been discussed on the US Right and among partisans of Israel’s Likud party. How a US strike against Iran following the dissolution of the nuclear agreement between the pair would go down in Pyongyang is unknowable. Unlike Tehran North Korea knows it can count on China’s fear of American influence reaching its borders to cushion it against any blowback if it ever does decide to relinquish its arms. But sabre-rattling towards Tehran by Washington now will certainly not inspire much trust in future American intentions among North Korea’s paranoid and secretive elites.