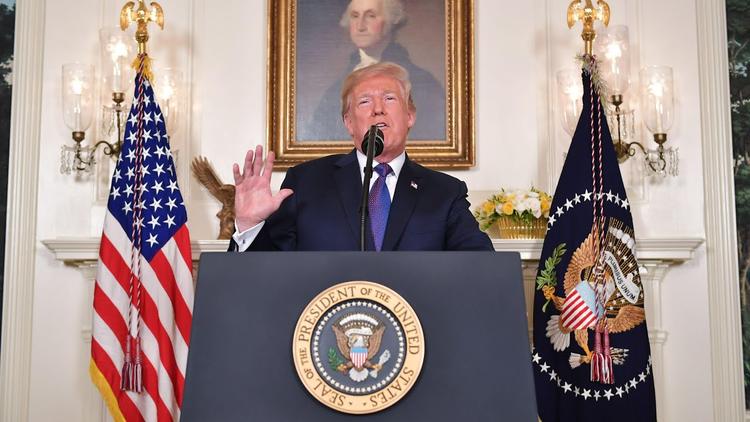 It was not a piece of military strategy designed to win any war aims.

It will have no effect on the situation in Syria at all.

It was not authorized by Congress. The Republicans in Congress had threatened to impeach Barack Obama if he struck Syria in 2013 under similar circumstances.

It was not authorized by the UN. None of the three striking states had been attacked or harmed.

In our age of politics as reality show, where we have hired the star of NBC’s “Apprentice” to play president (apparently in large part because he is both consistently awful and highly entertaining at once), even geopolitics is done for show.

The United States, France and the UK lost the Syrian War to Russia and Iran. It is all over but the shouting. They had hoped that the al-Assad regime, which had been a thorn in their sides for decades, would be overthrown. It isn’t an ignoble hope. It is a horrible, Stalinist regime with massive amounts of blood on its hands. But the reasons for which Washington, Paris and London wanted it gone were not necessarily noble ones. Syria is among the last states to reject Israel. Its secular elites reached out, isolated after the end of the Cold War, to Iran for support. Its system does not accommodate the Western corporate take-over of the country’s economy. Overthrowing countries that buck the neoliberal, barracuda capitalist Washington consensus and challenge the neocolonial order in the Middle East (with the assumption of Israeli hegemony in the Levant) is a no-brainer for the North Atlantic powers.

The Syrian revolution of 2011 was a homegrown revolt against a regime that had already largely abandoned its socialist policies in favor of the establishment of Alawite oligarchies, which imprisoned people for the slightest criticism of the regime, and under which the proportion of people living in absolute poverty was rapidly increasing. But when the regime cleverly maneuvered the revolutionaries into allying with Muslim extremists on the battlefield, even then the CIA went on supporting the rebels. Its officials would deny it, but they were one degree of separation away from al-Qaeda, just as they had been in Afghanistan in the 1980s. And even while the US FBI and right wingers in the Senate like Ted Cruz were darkly intimating that the Muslim Brotherhood and all its offshoots are terrorist organizations, the 40 vetted groups supported by the CIA were mostly Syrian Muslim Brotherhood.

No lesson of history is ever learned in Washington, D.C.

As I argued on Thursday, the Russo-Syrian military operation against the Saudi-backed Army of Islam in Douma, in the course of which chemical weapons appear to have been used, was a resounding success. Once the chem was released, the Army of Islam fighters, who had dug in their heels and inflicted substantial casualties on the elite Panther Brigade special ops forces of the Syrian Arab Army, abruptly surrendered. They turned over hundreds of their weapons, released dozens of captives, and agreed to exit north to Jarabulus in their thousands. It was one of the most ignominious defeats visited upon any guerrilla group in the course of the seven-year war.

If you had wanted to work against further such chemical use, the more effective method would have been to negotiate with Russia about it and apply pressure on Moscow.

The Tripartite missile attacks on Saturday will attrite some regime military capabilities in a small way. But since the Russian Federation’s Aerospace Forces are actually supplying the air power to defeat what is left of the rebels, the regime’s loss of some facilities won’t matter to the course of the war. I expect further Idlib and Deraa campaigns later this year, and I expect the regime over time to win them. I have to say that I’m surprised by the resiliency of the al-Assad clan. You wouldn’t have expected them easily to restore control over places like Homs (a largely Sunni Arab city with a strong Muslim Brotherhood movement). Security is no doubt fragile. But it appears that a reassertion of the regime is plausible in the short to medium term.

The missile attacks are for domestic politics, and perhaps to some extent a demonstration of political will to Russia and Iran. As military history they are a footnote.

Those who argue that they were necessary to show resistance to the use of chemical weapons are missing some things. The West backed Saddam Hussein’s use of chem in the Iraq-Iran War. It is hard to see why killing children with chlorine differs from the point of view of the children from killing them with bombs. Military action should be taken in accordance with international law. And, deploying missile strikes ineffectually renders them less effective politically down the road.

These strikes are like when a fistfight breaks out on the reality show Big Brother. The show will go on next week.