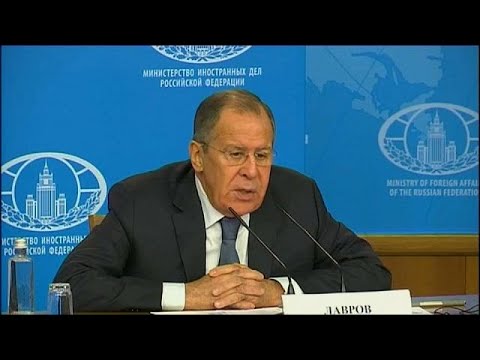 Russia and China are both putting their feet down about the talk in the US and France about renegotiating the Joint Comprehensive Plan of Action (JCPOA), the 2015 agreement on freezing and curtailing Iran’s nuclear enrichment program by the UN Security Council and Germany in return for lifting international sanctions. US President Trump is threatening to withdraw, while French President Emmanuel Macron urges that the deal be kept but renegotiated to widen restrictions on Iran.

The pushback comes as the US continues to violate the spirit of the agreement by retaining severe sanctions on Iran, which it had implied it would drop. The Department of Justice is even said to be planning action against Chinese smartphone Huawei for selling its products in Iran. You can imagine how this is going over in Beijing.

“We believe it as an irrevocable condition that the Joint Comprehensive Plan of Action (JCPOA) should be strengthened, preserved and that its functioning in its current form should be ensured in the future. Currently, it is crucial for all those who understand the JPCOA’s worthiness and significance to deal with what the situation dictates, that is to exert any effort for the agreement to be preserved and successfully and sustainably implemented in the future.”

Russian President Vladimir Putin’s spokesman Dmitry Peskov concurred, saying “We believe that no alternative exists so far . . . We are in favour of keeping the Joint Comprehensive Plan of Action in its current form.”

Ryabkov pointed out that Trump’s false allegation that Iran received $150 billion for signing the deal is completely without foundation. The US, he said, had illegally frozen Iranian assets in US banks and simply finally returned that money to its rightful owner.

Cole: Trump, who has no problem stiffing his suppliers or threatening to “take Iraq’s oil,” probably cannot actually understand why you would restore to other people money you had illicitly stolen from them, or what the difference is between that and giving them your own money.

Peskov noted that the JCPOA had been hammered out in a seven-country negotiation over years: “The question is, will it be possible to repeat such successful work in the current situation?”

It would probably be difficult to pin down Trump on what exactly in the JCPOA makes him unhappy other than that it was a multilateral agreement in which the Obama administration took part.

The agreement strictly limited the number of Iran’s centrifuges, put the country under frequent and spot inspections by the UN, required the destruction of LEU or uranian stockpiles enriched to less that 20% (the only kind of enriched uranium Iran had), and required the mothballing and destruction of the planned heavy water nuclear power facility at Arak.

The requirement of inspections lapses after 10 years, a provision that Israel and other non-signatories have sometimes criticized. Military facilities are not subject to inspections, but then the US put that exception into the Nuclear Non-Proliferation Treaty itself to avoid inspections of its own bases. Iran is under sufficient espionage scrutiny to make a secret ramping up of its enrichment program highly unlikely.

French president Emmanuel Macron wants to take on restrictions on Iran’s ballistic missile program and a provision that it withdraw from Syria, Iraq and Yemen. That is, rather outrageously, Macron wants to use the fact that Iran acquiesced in the deal on knee-capping its nuclear enrichment program as a wedge to push it around on a whole range of unrelated issues. I think most recent French international interventions, e.g. in Mali, have been useful to locals and the international community, but I’m not sure they leave Paris in a position to complain about Iran helping Iraq and Syria defeat Daesh/ ISIL.

Iran charges that hundreds of billions of dollars in Saudi arms purchases and investments lie behind the Franco-American push to renegotiate the JCPOA. It also charges Israeli behind the scenes lobbying in Washington and Paris.

Macron’s hopes of leveraging Trump’s obstructionism into negotiating a wider set of restraints on Iran will falter in the face of Russian and Chinese objections.

Russia and China wouldn’t really care if Iran’s ballistic missile program were interfered with, but Russia does want to sell Iran anti-missile missiles and wouldn’t want any agreement that forestalled those sales. Russia and China also probably would not care if the 10-year sunset provision of the Iran deal were extended.

But they see Iran’s role in Syria as a key contribution to the war effort against extremist Sunni guerrilla groups and both have their own problems with separatist or Salafi Muslim discontents. Both want the al-Assad government in Syria to survive.

So the “containing Iran” element in Macron’s thinking is a non-starter for Moscow and Beijing.

Moreover, although they might not mind the other tinkering with the JCPOA, they won’t help force Iran into accepting those further limitations.

On Monday at the meeting of the Shanghai Cooperation Council, Russia and China issued a joint communique supporting the Iran deal.

Euronews from 3 months ago: “Russia accuses the U.S. of undermining Iran nuclear deal”