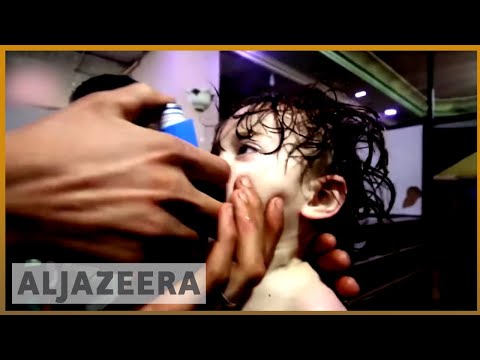 The Saudi-backed fundamentalist militia “Army of Islam” in the Douma district of East Ghouta near Damascus alleged Sunday that the al-Assad regime had dropped a barrel bomb full of chlorine and other chemicals on the rebel enclave on Saturday. Initial reports said that some 41, including non-combatants and including children, were killed, some with tell-tale signs of frothing around the mouth. Other reports spoke of some 150 dead.

The regime has conquered most of East Ghouta in a brutal campaign waged by Syrian Arab Army special forces and the Russian Aerospace Forces against guerrilla groups in the rebel stronghold. Of the roughly 350,000 inhabitants as of the beginning of this year, some reports suggest that 150,000 have fled, either to nearby refugee camps or north to the rebel-held province of Idlib.

Douma is the last holdout. Despite reports on Saturday that the Army of Islam had agreed to an evacuation, negotiations thereafter broke down. One problem is that the Army of Islam does not want to go to Idlib, which is dominated by the Levantine Liberation Organization (HTS, former Nusra Front), with which its members have a blood feud. HTS has continued links to al-Qaeda and may now be backed by Turkey, whereas the Army of Islam belongs to the pro-Saudi strand of hard line Salafism.

On Saturday, the Russian press, at least, reported that Army of Islam spokesmen boasted that the special operations Panther Forces (Quwwat al-Nimr) that had been committed against Ghouta militias were taking high numbers of casualties from Army of Islam snipers as they tried to advance into Douma. The regime has suffered a military collapse over the past 7 years, with most Sunni Arabs deserting or defecting. Alawi Shiite troops are for the most part loyal to the regime, but there may be only 35,000 or 50,000 of them left (the Syrian Arab Army had 300,000 troops in 2010).

The long and the short of it is that strongman Bashar al-Assad cannot afford to lose highly trained and highly valuable Panther Forces troops in large numbers.

Chemical weapons are used by desperate regimes that are either outnumbered by the enemy or are reluctant to take casualties in their militaries. Barrel-bombing Douma with chem seems to have appealed to the regime as a tactic for this reason. It had the potential of frightening the Douma population into deserting the Army of Islam. Guerrilla groups need favorable populations in which to operate. Mao Zedong compared such friendly locals to a guerrilla army’s ass, which allows it to sit down. Without an ass, he pointed out, guerrillas are forced to keep running around standing up, until they get exhausted. The regime is trying to deprive the Army of Islam of this fundament.

It might be asked why the regime would take this chance, given that Trump bombed the Shuaryat Air Force base last year this time in response to regime use of chemical weaponry at Khan Shikhoun. The answer is that the regime is more worried about disaffection in the ranks of its Special Forces than it is about Trump. Further, Trump’s emotional bombing was a one-off, not strategic. It did no lasting damage to the Shuayrat Base, from which fighter jets went on flying. And Trump has already announced that he wants to be out of Syria by October. Further, the barrel bomb may have been intended to kill 25 persons so that the attack might fly under the radar; this sort of weapon is unpredictable in its effects and the death toll rose to the level where it hit the headlines.

It is tiresome that one keeps having to fight against regime and Russian fake news about all this. The United Nations Commission of Inquiry on Syria has found large numbers of regime chemical weapons attacks. The rebels, in contrast, are not thought to have sarin, e.g., in their arsenal. While the Army of Islam could conceivably have chlorine, pro-regime and Putinesque trolls would have to twist themselves into pretzels to explain why it would release it in its own territory.

Here is a UN infographic on the regime’s chem use: 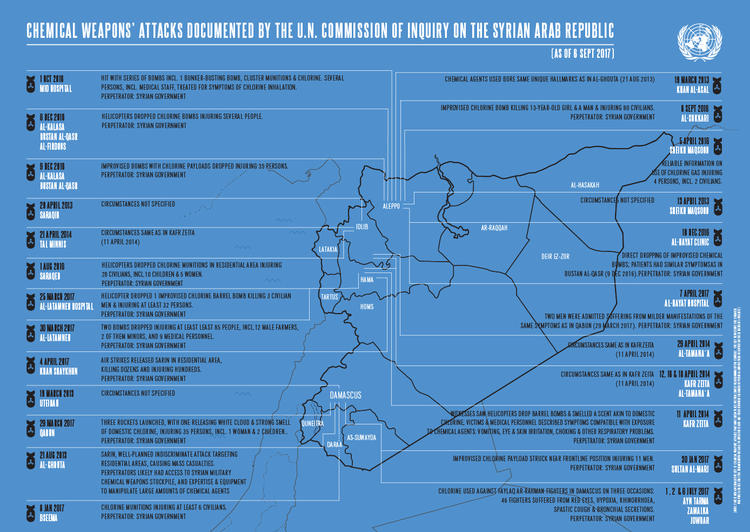