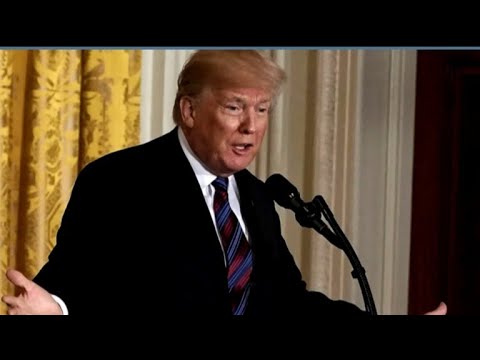 AP’s Josh Lederman reports that on Tuesday, Trump told national security aides meeting in the White House that his patience is running out with the Syria operation.

“I want to get out. I want to bring our troops back home. I want to start rebuilding our nation.” Trump is quoted as saying.

Lederman reports that Trump has told the people around him that he wants US troops out of Syria within six months, i.e. by the beginning of October, apparently in hopes that Republicans can run for Congress in part on the defeat of ISIL and the bringing of troops home. This tactic may emulate the Obama 2011 withdrawal from Iraq, which allowed Dems in 2012 to run on a platform that the wars abroad were ebbing.

Trump is therefore uninterested in rebuilding Raqqa and trying to put eastern Syria back on its feet, which many observers believe is necessary to prevent ISIL from eventually reasserting itself. He has frozen $200 million in US aid funds slated for the Raqqa area.

The Saudis appear desperately to want the US to stay in East Syria, in hopes that the Pentagon can somehow weaken Iran, keep ISIL from returning, and keep pressure on the Bashar al-Assad government to step down or open up.

The Saudis’ own project in Syria, of funding hard line Salafi guerrilla movements such as the Army of Islam and directing bombings in Damascus, has gone down in flames. One of the last AoI strongholds, in Douma near Damascus, has just fallen to a combination of regime special operations forces and the Russian Aerospace forces. Syria is a multicultural country with large religious minorities and a relatively secular-minded urban Sunni middle and upper class, so that Saudi-backed Salafism was likely always doomed to fail.

Trump appears to want $4 bn. from the Saudis for East Syria reconstruction and as a quid pro quo for a more gradual US withdrawal (over the next six months instead of immediately).

Giving East Syria to Saudi Arabia is attended with its own dangers, since the Saudis likely will appeal to Salafi Arabs there– the sort of people who had backed ISIL– with the dangers of further radicalization. Moreover, the area was conquered by the leftist YPG Kurdish militia, which now runs it, and will not exactly welcome Saudi influence. Further yet, the Russians and the al-Assad government want to restore Damascus’ control over this region, and they will likely ally with the Kurds against Arab Salafis, just as the US had done.

Trump’s determination to leave Syria contrasts with his criticism of Obama’s 2011 withdrawal from Iraq (which had been mandated by the Iraqi parliament and to which even Bush had agreed).

One possible explanation for his haste is that the Russian government wants the US out of Syria, which Moscow now views as a Russian sphere of influence. Vladimir Putin appears to have some sort of hold over Trump. The president’s demand for an early departure comes after a series of strong Russian statements and around the time Putin, Turkey’s President Tayyip Erdogan, and Iran’s Hassan Rouhani were meeting in Ankara to discuss Syria’s future without any American representation. Turkey and Iran both also want the US out of Syria.

Russian foreign minister Sergei Lavrov complained this week of the US presence in eastern Syria, according to Eurasia Daily :

“It is necessary to keep in mind that the United States sent its troops, its special forces, air forces and established a coalition to work in Syria unlawfully, with harsh violations of the NATO Charter that urges to respect sovereignty, territorial integrity of all member states. We have drawn attention to it not once. Our military and diplomats get in contact with the USA periodically, because we are interested in sooner overcoming the conflict, establishing peace, switching to the political process, solving humanitarian issues. In this connection, one must interact with everyone who is in Syria, but the fact that the USA is not on the legal basis there still remains.”

“They settle there [Eastern Syria] not only with the military facilities, they establish governmental bodies there that are loyal to them, that are controlled by them and will be financed by them. This all is done in the context of isolating those areas from the rest part of Syria. They were persuading us that they had no such plans. But they were not convincing. If the US president says that the US troops will be withdrawn from Syria soon, it means that he at least is committed to previous statements that after winning over the ISIS (the Islamic State [group], banned in Russia), the USA will leave the territory of Syria. We shall see.”