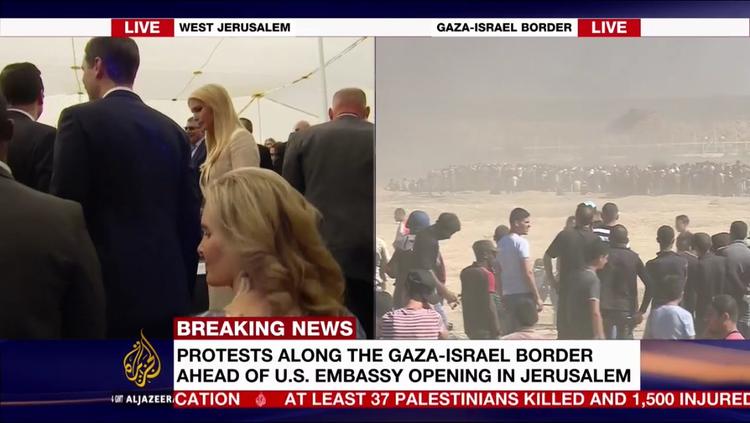 Washington, D.C. (Otherwords.org) – No words can describe the anger and anguish I feel as a Palestinian in America watching this unfold.

Meanwhile, just miles away in Gaza, Yazan Ibraheem Mohammed Al-Tubassi lay dying after repeatedly being shot by Israeli troops during protests at the Gaza border fence. Elsewhere, relatives of Taher Ahmed Madi — another shooting victim — carried his body home from the hospital to prepare for his funeral.

No words can describe the anger and anguish I feel as a Palestinian in America watching this unfold.

Along the Gaza fence, Israeli troops have gunned down thousands of unarmed Palestinian protesters, killing 60 and injuring over 2,700 in a matter of days. Many were teenagers, women, and children.

The protests weren’t about the relocation of the U.S. embassy. They began several weeks ago to mark the anniversary of the Nakba, or “catastrophe” — the mass exodus and ethnic cleansing of hundreds of thousands of Palestinians since Israel’s founding in 1948.

Every year, while Israelis celebrate the establishment of their state, millions of Palestinians mourn the end to their existence as they knew it.

For the Trump administration to choose this day for the relocation of the embassy while Palestinians were being murdered just 60 miles away is horrendously cruel. The United States has proven that it isn’t only indifferent toward Israel’s treatment of Palestinians, but has actively green lit the violence of the past few weeks.

In 1948, my grandparents, whose families had lived in Palestine for hundreds of years, were forced out of the only home they ever knew. Practically overnight, they were made into refugees and forced to make the almost 200-mile journey to Jordan on foot.

Leaving behind their belongings, family, and memories, they settled in Jordan, hoping the international community would help them one day return to their homes.

My grandparents, who never stopped talking about their life in Palestine, never saw it again. They passed away in Jordan, leaving the key to their house in Palestine with my family. We still have it today, serving as a reminder of our roots — and of the abuse my family and so many others have suffered under Israel.

Still, I’m reminded that my grandparents were fortunate enough to make it out alive. The millions who have been forced into Gaza cannot say the same. They aren’t free to come and go as they choose, but remain locked in the world’s largest open air prison — cut down if they so much as approach the “border fence“ with Israel.

Inside they suffer unimaginable conditions.

Only 10 percent of Gazans have access to safe drinking water, almost half of the population is unemployed, and over 70 percent live in poverty. They get only a few hours of electricity a day. Not to mention the psychological effects of living under siege, and the daily fear of attacks by Israel.

Now, politicians across the U.S. are voicing their support for the embassy relocation, while other countries announce their decision to follow America’s lead.

It’s infuriating to see my own country actively condoning brutal violence against my people while other countries sit back and watch. How can Palestinians ever trust a “peace process“ led by an administration that degrades them this way?

I keep hearing people say that Gazans need to “protest peacefully“ as Israeli snipers gun them down methodically. They’re being given two options: Either suffer inhumane treatment or get killed protesting it. It’s not much of a choice.

No one would passively accept a life like this. Why should Gazans?

Razan Azzarkani is an executive assistant at the Center for Global Policy. She says she found her passion at the crossroad of advocacy and justice towards human rights while studying and interning with various governmental and non-governmental organizations, conducting research, policy, and advocacy work. Her BA in Global Affairs is from George Mason University.