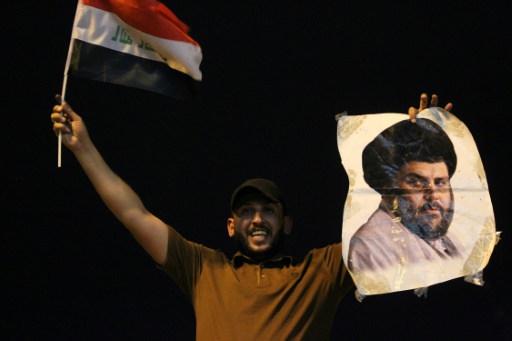 Baghdad (AFP) – An alliance spearheaded by nationalist cleric Moqtada Sadr, whose fighters once battled the United States, led Monday in surprise preliminary results from Iraq’s first poll since the defeat of the Islamic State group.

If confirmed, the outcome would throw open the race to become the next premier, following a parliamentary vote on Saturday hit with record abstentions fuelled by widespread disillusionment.

According to partial results seen by AFP, the Marching Towards Reform alliance of Shiite cleric Sadr and his communist allies was ahead in six of Iraq’s 18 provinces and second in four others.

Sadr has reinvented himself as an anti-graft crusader after rising to prominence as a powerful militia chief whose group waged a bloody insurgency against US forces after the 2003 invasion.

While long railing against the US, the nationalist firebrand has also distanced himself from its key rival Iran, drawing closer to regional Sunni powerhouse Saudi Arabia.

Next in the running is the Conquest Alliance, made up of ex-fighters from mainly Iran-backed paramilitary units that battled IS, with results putting them ahead in four provinces and second in eight others.

The head of the list is Hadi al-Ameri, a long-time ally of Tehran, whose forces ended up battling alongside the US to oust the jihadists.

Both Sadr and Ameri are political veterans well-known to Iraqis, but they pitched themselves as outsiders seeking to sweep clean the country’s reviled elite. 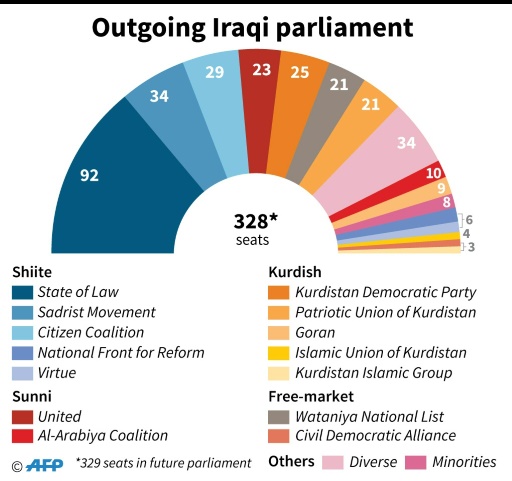 The complex electoral arithmetic of the Iraqi system, however, means that the final makeup of 329-seat parliament is still far from decided.

The ballots of some 700,000 security personnel who voted and Iraqis abroad were yet to be tallied up, meaning Abadi could get a boost five months after he announced victory over IS.

In a televised address Monday afternoon, Abadi hailed the “winning lists” and called on all sides to “respect the results”, after calls for a recount in the multi-ethnic province of Kirkuk.

Whatever the outcome, there looks set to be lengthy horse-trading between the main political forces before any new premier and a coalition government can be installed.

Sadr — who did not stand as a candidate and therefore cannot become premier — appears in pole position to play kingmaker after years on the sidelines.

Among the traditional powerbrokers looking set to lose big at the election was divisive former premier Nuri al-Maliki, who remains widely reviled for the loss of territory to IS.

The electoral surprise comes with tensions surging between the US and Iran after Washington’s withdrawal from the 2015 nuclear deal, sparking fears of a destabilising power struggle over Iraq.

Abadi — who came to power as IS swept across Iraq in 2014 — has been a consensus figure who balanced off the US and Iran. 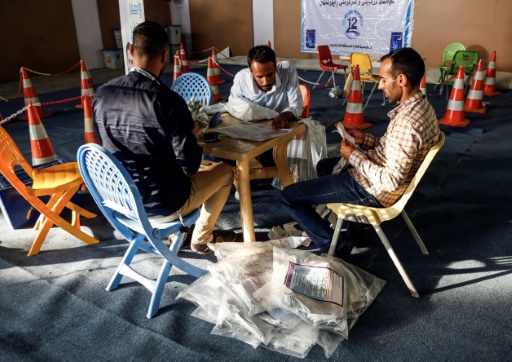 Several senior political figures had previously told AFP that preliminary results put Abadi in the lead, on course to scoop 60 of the 329 parliamentary seats up for grabs.

An official at the US State Department remained coy ahead of the definitive tally, telling AFP “we are awaiting the announcement of the official results and look forward to the formation of the new government”.

The ballot saw a record low turnout, as only 44.5 percent of eligible voters headed to the polls in the lowest participation rate since the 2003 US-led ouster of Saddam Hussein.

After the announcement that the Marching Towards Reform was ahead in Baghdad, supporters took to the streets in the capital to celebrate early Monday.

Crowds of mainly young people waved flags and pictures of the populist nationalist cleric Sadr while fireworks fired off into the night sky. 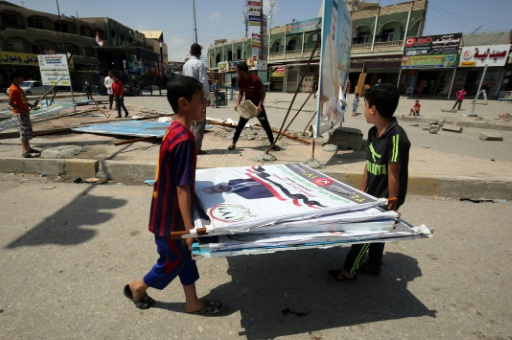 AFP / AHMAD AL-RUBAYE. Iraqi youth dismantle campaign posters in the city of Mosul on May 12, 2018, as they collect the scrap metal to sell.

Zeid al-Zamili, 33, described the vote as a “new chapter for the Iraqi people”.

“We’re done with corruption and the corrupt, we’ve suffered for years, now everything will change,” added another supporter in a black t-shirt.

In the cleric’s impoverished Sadr City neighbourhood in Baghdad residents said they were hoping for improvements after the elections.

Whoever emerges as premier will face the mammoth task of rebuilding a country left shattered by the battle against IS — with donors already pledging $30 billion (25 billion euros).

Over two million people remain internally displaced across the country and IS — while weakened — still has the capability to launch deadly attacks.

Featured Photo: AFP / AHMAD AL-RUBAYE. An Iraqi man celebrates with a picture of Shiite cleric Moqtada Sadr in Baghdad on May 14, 2018 following the general election