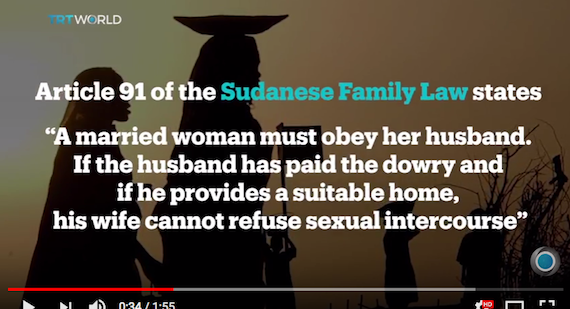 The woman’s in-laws rejected financial compensation for their son’s murder in favor of executing their daughter-in-law – who was raped by her husband.

An online campaign is gaining momentum to defend a 19-year-old Sudanese woman sentenced to death for murdering her husband, who she says raped her after she was forced to marry him.

The story of Noura Hussein received international attention when the details of her case circulated on social media with the hashtags #JusticeforNoura and #SaveNoura, and an online petition on Change.org.

In 2016, Hussein attempted to escape her arranged marriage but was forcibly restrained by her in-laws while her husband raped her to consummate their vows.

“She would not have sex with the man; he recruited some of his cousins and brought them home where they held her down while her husband raped her,” Sarah ElHasan, a rights activist supporting Hussein’s case, told al-Jazeera.

The following night, when her husband tried to rape her again, Hussein stabbed him with a knife and killed him, her lawyer Ahmed Sebair said.

Hussein’s supporters stood behind her in the Omdurman courtroom as the judge condemned her to death by hanging on Thursday after her husband’s family refused financial compensation for the killing, demanding instead that she be executed.

“The death penalty is the ultimate cruel, inhuman and degrading punishment, and to apply it to a rape victim only highlights the failure of the Sudanese authorities to acknowledge the violence she endured,” said Seif Magango, of Amnesty International.

Magango said that marital rape – despite being a taboo – is still a common occurrence in Sudanese society.

Nahid Gabralla is the director of NGO SEEMA, which assists gender-based violence victims and survivors. Gabralla said: “In my work, I’ve seen other cases like this. The suffering of Sudanese women is happening all the time. The case of Noura is different. She stood for her rights.”

Magango said: “This girl is a victim. She was married off at the tender age of 16 against her will and she stood up against that and refused to be forced into marriage.

“The death that took place was an act of self-defense and it is a travesty of justice that she is at risk of being murdered, being killed by the state only for defending herself and that is something that needs to be corrected and this death penalty, this death sentence revoked.”

Hussein’s lawyers have just under two weeks to appeal the conviction.