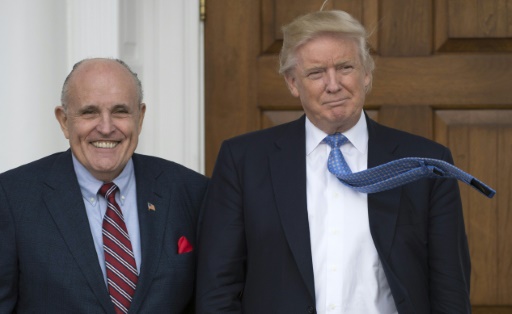 Rudy Giuliani’s so-called defense of Donald J. Trump on Sean Hannity’s nightly One Hour of Hate involved outing the president’s money laundering deal with Michael Cohen whereby he paid him a regular retainer for undisclosed services and then expected him to spend from his own bank account on fixer jobs for Trump. This arrangement helps explain why Cohen maintained he was not reimbursed for his hush money of $130,000 to Stormy Daniels. He was reimbursed, but it was via a supposedly unrelated retainer.

Since the retainer functioned to repay Cohen for intervening in a matter that could have otherwise thrown the election, it may have been illegal under election campaign laws, regardless of Giuliani’s denials. Ms. Daniels’ attorney alleged that the arrangement itself was illegal, inasmuch as it involved falsified invoices and receipts between a lawyer and client. I’m not qualified to pronounce on that charge. If it is true, then Giuliani has inadvertently increased Trump’s legal problems.

He certainly further tarnished Trump’s tattered reputation when it comes to ever telling the truth.

It may be that Giuliani made the revelation because Trump had earlier lied about it, maintaining he did not pay Cohen or reimburse him for the Daniels payment, and Giuliani wanted to get the truth out in order not to have to defend a lie down the road if the matter went to trial.

Giuliani also alleged that Trump fired FBI director James Comey because Comey refused to assure him that he was not under investigation. Comey implied he was fired because he declined to assure the president that he would bury the investigation of former National Security Adviser Michael Flynn. Flynn had acted as a go-between to Russian ambassador Sergey Kislyak for Manchurian Candidate Trump.

The long and the short of it is that Giuliani revealed that Trump lied, yet again. The Washington Post estimates that he is up to 6 falsehoods a day.

A president who serially lies is a particular problem for foreign policy. Trump is on the verge of pulling out of the 2015 Iran Deal, in part on the grounds provided by Israeli Prime Minister Binyamin Netanyahu in his stunt retailing old intelligence before 2003 which he attempted to portray as relevant to 2018. Trump appears to have bought the lie, what with being truth-challenged and all. Netanyahu has predicted an Iranian nuke as often as most people predict it will get cold this winter. Netanyahu has several hundred nuclear bombs himself and it has been alleged that he was personally involved in smuggling triggers for them out of the United States. Iran has no bombs or any prospect of one.

So Trump will tell us that he is pulling out of the Joint Comprehensive Plan of Action because he believes the Iranians are cheating, or that it was a bad deal in the first place (he shows no sign of knowing what was in it), or because, I don’t know, Iranians are X. He makes things up.

Trump has no credibility to make important foreign policy decisions because he is a fundamentally dishonest personality.

In an ideal world, Congress would use its control of the budget to stop Trump from implementing new sanctions on Iran or of practically withdrawing from the JCPOA.

But I fear that currently a majority of our national legislature consists of dedicated liars, as well.