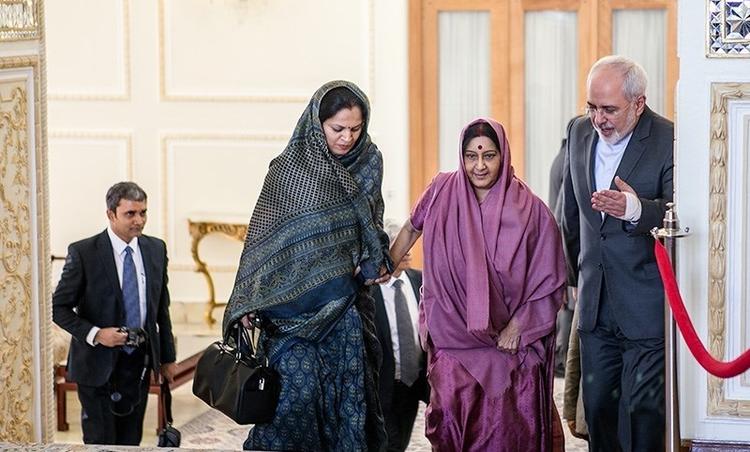 India’s External Affairs Minister, Sushma Swaraj, on Monday did not mince words in delivering a sharp rebuke to US plans for sanctions on trade with Iran, including National Security Adviser John Bolton’s threats against third parties like India. She said, according to The Hindu,

“Our foreign policy is not made under pressure from other countries . . . We recognise UN sanctions and not country-specific sanctions. We didn’t follow U.S. sanctions on previous occasions either.”

After Minister Swaraj’s meeting the same day with Iranian foreign minister Javad Zarif, her office said that the External Affairs Ministry and the Indian cabinet

“positively assessed the implementation of decisions taken during the visit of President Rouhani to India… [including] in the areas of connectivity, energy, trade and promotion of people to people contacts . . .EAM conveyed that all parties to the [JCPOA] Agreement should engage constructively for peaceful resolution of the issues that have arisen with respect to the Agreement.”

Indian Prime Minister Narendra Modi, a right wing Hindu nationalist, had earlier seemed to waver over how to deal with Trump’s violation of the UN Security Council-backed Iran nuclear deal (the Joint Comprehensive Plan of Action or JCPOA). The return of severe US sanctions on Iran is about as welcome in Delhi as a cobra in a mongoose burrow.

India does $115 bn in annual trade with the US, but that with Iran is $13 bn a year. On the surface, you might think it would be easy for New Delhi to sacrifice the Iran piece of its trade for the much bigger American piece. But the fact is that India can buy turbines and washing machines from some country other than the US, whereas it needs Iran’s petroleum and natural gas for its future, and wants to use Iran to get around Pakistan to the northwest. Energy and geopolitics play a big role here.

India trades with Iran in Euros, which are not under the purview of the US Department of the Treasury. It uses the Brussels-based SWIFT bank exchange. If Europe stands firm, India could go on importing Iranian petroleum without much fear of sanctions. That $115 bn per annum in trade that India does with the US is a fraction of that of countries like China or South Korea, and many of the firms that deal with Iran likely have no US assets that could be attached. Even if Iran is again kicked off the bank exchange, Iran and India in the past have traded billions in rupees and riyals, which locks them in to buying from each other with the money but is better than foregoing the trade. Iran has now developed insurance instruments of its own for its oil exporting tankers and also built a small fleet of such tankers, so that some of the tactics the Obama administration tried to marginalize Iran are now more easily overcome. Of course, getting around US sanctions imposes costs, but Iran can sacrifice say 15% of its oil profits for the sake of continuing to do business.

India’s is among the fastest-growing economies in the world (projected to grow 7% this year), with a gross domestic product in nominal terms for 2017, according to the International Monetary Fund, of $2.6 trillion– slightly more than that of France (as well as exceeding that of Italy, Brazil and Russia!).

Modi’s Hindu nationalist Bharatiya Janata Party has been trying, with some success, to win over voters from the less privileged castes, slowly overcoming its earlier reputation as a vehicle of upper-caste Brahman privilege. One of his populist projects has been bringing electricity to more villagers (a quarter or so of Indians, 300 million people, were living without electricity before Modi’s latest push). Although the government now says all the country’s villages have electricity, it only means that wires have been laid to them all and that at least 10% of the village’s residents have electricity now. Millions are still unserved or underserved, a lacuna Modi does seem determined to address. To continue with this quest, he has backed an “all of the above” energy strategy much like that of former US president Barack Obama. Although his government is making a big push for solar and wind, it also is seeking to make sure India has enough petroleum and natural gas to keep its economic surge from petering out.

This strategy is a matter of survival for the BJP, and a huge party governing 1.3 billion people isn’t going to sacrifice its electoral strategy for the sake of Trump’s pique and Bolton’s war-mongering.

Likewise, India would like to tap into the gas and oil of Central Asia (Turkmenistan and Kazakhstan in particular) and even Russia through pipelines down through Iran to the planned Indian-run Chabahar port on Iran’s Gulf coast. This plan allows India to compete with the joint China-Pakistan port of Gwadar in Pakistani Baluchistan, giving it a geo-strategic reach-around Islamabad and Beijing. It also ensures Indian energy supplies as the economy grows into the world’s top five.

Hence Iran? Hence Iran. Iran is India’s third largest supplier of petroleum, and India desperately wants to see Iran’s South Pars natural gas developed and the gas exported to India, either through Pakistan or through an underwater pipeline through the Gulf. At the least, it wants access to Central Asian hydrocarbons through Iran. And, India wants a good relationship with Iran as a way of offsetting its difficult relationship with Pakistan.

They don’t seem to say so publicly in New Delhi, but I suspect India is also afraid that Trump will push Iran solidly into the China camp, creating a Sino-Muslim geopolitical bloc on India’s northwest.

Minister Swaraj’s brutally frank comments suggest that Trump just lost India on Iran policy, and it is not impossible that his tough tariff and other policies could push this huge potential ally away.