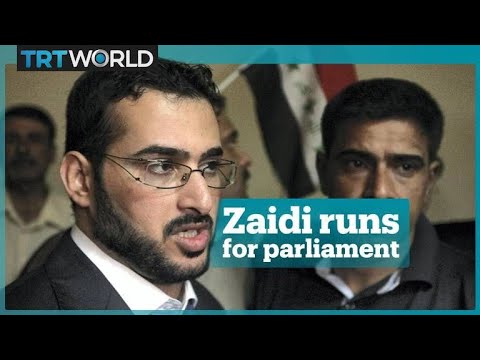 After the incident that made him famous worldwide, Muntazer Zaidi started a foundation aiming at providing relief to Iraqi victims of the U.S. occupation.

Ten years after he threw both his shoes at George W. Bush during a press conference in Baghdad, making worldwide headlines and sparking a small diplomatic crisis, journalist Muntazer Zaidi is trying to kick-off his political career by running for the Iraqi parliament.

Zaidi, 39, threw his shoe at Bush in protest of the U.S. invasion of his country as he yelled “this is a farewell kiss from the Iraqi people, you dog,” to later take off his second shoe yelling “this is for the widows and orphans and all those killed in Iraq,” just before being tackled by bodyguards.

Back then He missed both strikes, but he hopes not to miss this one.

“I announce my candidacy for the Iraqi parliament, as part of ‘Marchers Towards Reform’. A small part of my campaign program is to limit the privileges of politicians and lawmakers who are there to serve the people,” said Zaidi in an online video announcing his candidacy.

Zaidi was sentenced to twelve months in prison for attacking a visiting head of state, but was released three months earlier for his good behavior and has been in and out of the country since then.

He founded the “Al-Zaidi Foundation for the Relief of the American Occupation’s Victims” when he first came back to Iraq in 2011, aiming to help the children and women who lost their relatives during the U.S. occupation of Iraq and to convict those who contributed to it.

“This foundation works on showing the whole world the occupation’s crimes in Iraq and the reality of the big destruction and ruin that occurred because of this occupation and how it affected the future of Iraqi people,” says the Al-Zaidi Foundation’s website.

Former President Bush ducking in a press conference at the Prime Minister’s Palace in Baghdad, after Al-Baghdadia TV journalist Muntazer Zaidi threw his shoes at him. Bush avoiding being hit by the shoes, Nouri al-Maliki tried to catch this second shoe. Still | The Internet Archive.

The atrocities committed by the U.S. occupation in Iraq are Zaidi’s main focus, as he uses footage of him throwing his shoes at Bush as part of his campaign. “As you know me from a long time ago, I will be supporting the oppressed people and be against oppressors,” said Zaidi.

“If I become the prime minister of Iraq or the president then the first thing I will do is to ask the United States of America to officially apologize to all Iraqis, to compensate the victims and hold former President George W. Bush accountable.”

Initially, several media outlets reported that Zaidi was running for president, a rather ceremonial position, but his videos and campaign statements confirm he is actually running for parliament.