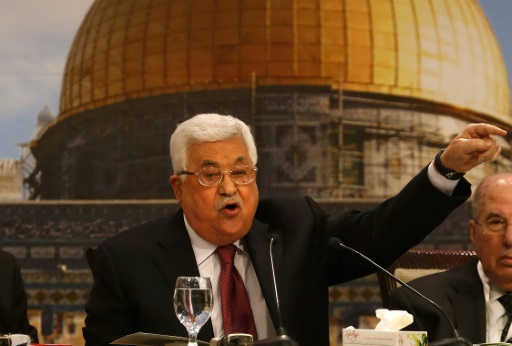 Jerusalem (AFP) – Palestinian president Mahmud Abbas drew widespread condemnation Wednesday, including from the European Union and the United States, over alleged anti-Semitic comments suggesting the “social function” of Jews in banking had led to past massacres.

The 82-year-old Abbas made the comments during a free-wheeling speech that led to outrage among Israelis, with Prime Minister Benjamin Netanyahu calling him a “Holocaust denier”.

The condemnations came after Abbas, who has faced accusations of anti-Semitism before, suggested in an address to a rare meeting of the Palestinian National Council on Monday night that Jews’ relations with banking had led to hostility against them.

“From the 11th century until the Holocaust that took place in Germany, those Jews — who moved to Western and Eastern Europe — were subjected to a massacre every 10 to 15 years. But why did this happen? They say ‘it is because we are Jews’,” Abbas told hundreds of delegates in Ramallah.

He contrasted this with Jews in Arab countries, who he argued had not faced similar persecution.

​Abbas also repeated claims he made in January that Israel was a “colonial” project encouraged by Europeans who wanted to be rid of their Jewish populations.​

David Friedman, US ambassador to Israel, said Abbas had reached a “new low”, while President Donald Trump’s envoy Jason Greenblatt said “peace cannot be built on this kind of foundation”.

“The speech Palestinian President Mahmud Abbas delivered on 30 April contained unacceptable remarks concerning the origins of the Holocaust and Israel’s legitimacy,” a spokesman for the EU’s diplomatic service said in a statement.

“Such rhetoric will only play into the hands of those who do not want a two-state solution, which President Abbas has repeatedly advocated.”

German Foreign Minister Heiko Maas condemned the comments, saying his country rejects “any form of Holocaust revisionism” and has “a duty to vigorously fight all forms of anti-Semitism.”

An the UN’s special coordinator for the Middle East accused Abbas of repeating “contemptuous anti-Semitic slurs”.

“Such statements are unacceptable, deeply disturbing and do not serve the interests of the Palestinian people or peace in the Middle East,” said a UN statement issued on Nickolay Mladenov’s behalf.

Senior Palestinian official Saeb Erekat said Wednesday he was “shocked” at what he described as an “attack orchestrated by Israel around the world to accuse president Abbas of anti-semitism”.

But Friedman said on Twitter that Abbas had “reached a new low in attributing the cause of massacres of Jewish people over the years to their ‘social behaviour relating to interest and banks'”.

Abbas, elected to a four-year term in 2005 but who has remained in office in the absence of fresh elections, had not responded to the condemnations.

Relations between the US and Palestinian leadership have broken down over the controversial American plan to move its Israeli embassy from Tel Aviv to Jerusalem.

The move, which is due to be completed on May 14, sparked major protests by Palestinians, who consider east Jerusalem their capital, and led Abbas to cut off ties with Trump’s administration.

In March, Abbas labelled Friedman a “son of a dog” during an attack on Trump’s policies while also calling him a “settler,” referring to his support for Israeli settlements in the occupied West Bank.

At the time, Friedman, who is Jewish, said “his response was to refer to me as son of a dog. Is that anti-Semitism or political discourse?”

Abbas has been accused of anti-Semitism in the past, including in 2016 following a speech to the European Parliament.

In those apparently unscripted remarks, Abbas said that recently “a number of rabbis in Israel made a clear declaration and asked their government to poison water to kill the Palestinians”.

He gave no source for the accusation, but said it was part of wider Israeli campaign of incitement against Palestinians.

Abbas’s office later acknowledged that the reports on which his comments had been based had proved without foundation.

The accusation that Jews were poisoning the wells of Christians gained traction in 14th century Europe as a plague swept across the continent.

Another allegation from the Middle Ages — that Jews murdered Christian children to use their blood for ritual purposes — gave rise to the term “blood libel”.