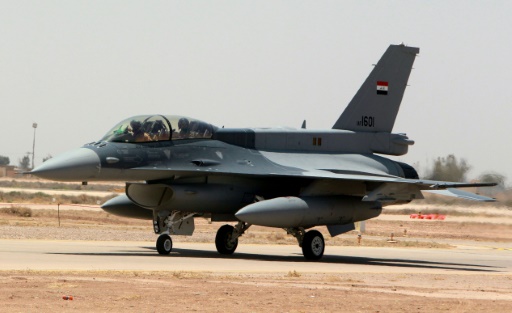 AFP/File/SABAH ARAR.
An Iraqi F-16 fighter jet on the tarmac at Balad air base in the Salaheddin province, north of the capital Baghdad, on July 20, 2015.

Baghdad (AFP) – Iraqi warplanes carried out a raid Sunday targeting Islamic State group commanders in eastern Syria, in the second such strike on the jihadists since mid-April, the premier’s office said.

Prime Minister Haider al-Abadi ordered the “painful strike” which targeted “a meeting of IS commanders south of Al-Dushashiya in Syrian territory”, a statement said.

Dushashiya is in a desert region of Syria’s Hasakeh province, where a US-backed Kurdish-led alliance is fighting the jihadists.

“After receiving information on the target in co-operation with Syria’s government and in co-ordination with coalition forces (led by the US), F-16s from the Iraqi air force led strikes against a command post of IS, 10 kilometres from the Iraqi border inside Syria,” said General Mohammad al-Askari, an adviser to Iraq’s defence ministry.

“This attack took place following a meeting of several Daesh commanders who were planning terrorist operations on Syrian or Iraqi territory,” he said, using an Arab acronym for IS.

The target “was completely destroyed and all the officials there were killed,” he said, without giving a death toll.

Askari also said Iraq hosts a centre that co-ordinates military activity with Iran, Russia and Syria “against IS”.

“This is not the last strike in Syria. They will continue, in relation to the activities of Daesh.”

A week ago, Abadi told the media that Iraq would carry out air strikes against IS outside the country’s own borders.

On April 19, Iraq said it had carried out an air raid against IS in Syria that killed 36 IS fighters, near the town of Hajin in the eastern province of Deir Ezzor.

Iraq declared victory in December against IS, which launched a sweeping offensive in 2014 and at one point controlled a third of the country.

The jihadists still control pockets of desert along the border with Syria.