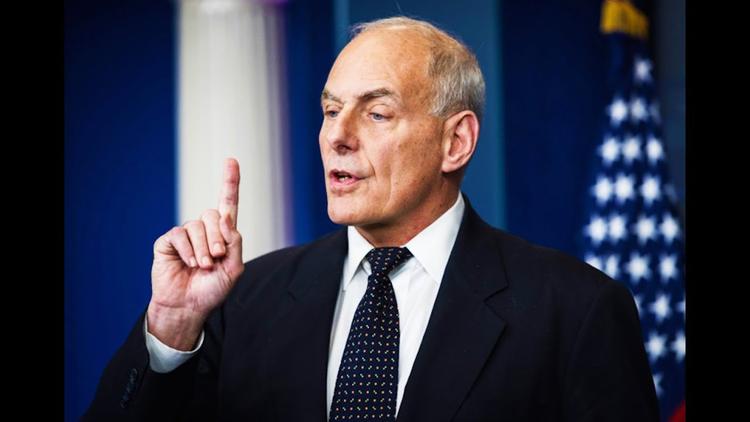 John Kelly, White House chief of staff, is an immigrant-hating bigot, as demonstrated by a long series of Draconian statements and measures that would have embarrassed most normal people into a lifetime vow of silence in their wake.

Kelly bizarrely defended Confederate slave drivers of the 1860s as having lived at a time before the evils of slavery were apparent to moral people. Haiti abolished slavery in 1804, Mexico in 1824 and Tunisia in 1846. But Kelly’s assertion becomes a little more understandable in view of his NPR interview on May 11.

Kelly: “But a big name of the game is deterrence.”

NPR: “Even though people say that’s cruel and heartless to take a mother away from her children?”

Kelly: “I wouldn’t put it quite that way. The children will be taken care of — put into foster care or whatever. But the big point is they elected to come illegally into the United States and this is a technique that no one hopes will be used extensively or for very long.”

Kelly’s doctrine of “deterrence” of undocumented immigration into the US through family separation is undergirded by a special kind of sadism and ignorance combined. First of all, villagers in Honduras are not going to know about Kelly’s policy. Second, they are so desperate that many will take the risk anyway. Third, it is wrong to pounce and take US citizen children away from their mothers and fathers all of a sudden, giving them no time to make alternate arrangements. As for foster homes, with all due respect to the dedicated people who often run them, social science has proven that they are the biggest producer of a criminal class in the US. Children growing up without strong parental role models have a much greater chance of ending up in prison. Yes, that’s right. Social science says that if you want a safe society, don’t deport the parents of US citizen children.

Under Trump, ICE (which was only created recently and should be decommissioned) has been routinely doing things like traumatizing families by arresting undocumented parents when they come to pick up their children at school, in front of the eyes of the children, and leaving the latter unattended. The agents are not wrong to enforce the law, but this sort of tactic is clearly the result of instructions from Kelly and his successor, and is deliberate psychological warfare on American citizens.

Kelly’s self-satisfaction with getting rid of unwanted adults and putting their children, our fellow US citizens, in “foster care or whatever” (!!!) can only be compared to one phenomenon in American history.

Back in the days of slavery, white slave owners in the mid-Atlantic states like Kentucky used to separate fathers and sometimes mothers from their children and “sell them down the river” to the big plantation owners of the deep south.

Brown and black slaves were, like undocumented immigrants, not citizens and so they were not conceived by white elites as fully human persons. Hence, their families could be divided at will and parents could be sent far away, never to see their children again. They were treated like thoroughbred animals.

Kelly went on to slam these immigrants for not knowing English and for being unassimilable and having no skills. In fact, as conservative godfather Milton Friedman argued, they wouldn’t come here if they weren’t finding jobs that locals would not or could not fill. As for language and assimilation, Kelly’s own Italian-American side of the family came without English and remained here without citizenship for decades.

Here's John Kelly's maternal grandmother Teresa as a child in the 1900 census.

Her father, a day laborer named John DeMarco had been here for 18 years.
He had not become a citizen.
He could not read, write, or speak English.#resistancegenealogy pic.twitter.com/pmnHD4Yobq

The 1930 census shows those great-grandparents living with their daughter, son-in-law and grandchildren, one of whom was Kelly's mother.

Undocumented immigration to the US is no longer a big problem. Every year, more Mexicans have left than come in during the past decade. There was an issue in the 1980s and 1990s, but measures were taken to deal with that issue. Since 2002 about 5 million persons have been deported, possibly a bit more under Obama than under Bush. There isn’t a crisis of arrivals and there isn’t a crisis in enforcement. Most of those who came in the 1980s and 1990s, by now have firm roots in their communities and are thick with citizen relatives, and some sort of amnesty ought to be arranged if we were a decent society. But then if we were a decent society we wouldn’t have invaded and occupied Iraq or elected Donald Trump president.

Kelly’s unconscious evocation of the old white supremacist practice of separating brown and black families and selling the adults down the river tells us that not as much has changed since the 1860s as a lot of us would have liked.