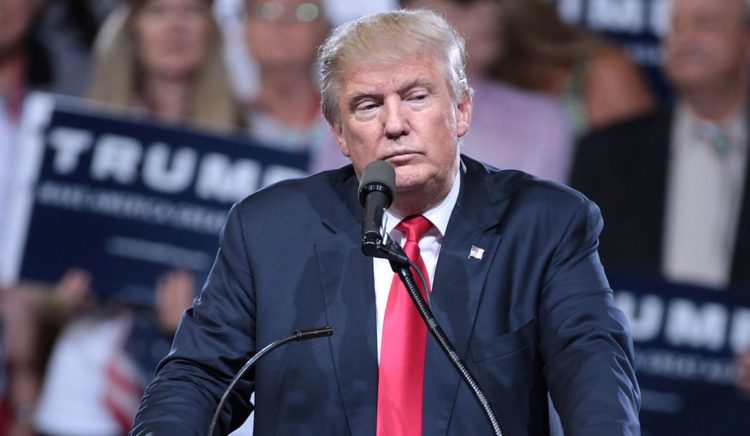 Trump on Friday added to the astronomic tally of his bizarre brainfarts by saying of North Korean dictator Kim Jong Un, “He speaks, and his people sit up at attention. I want my people to do the same.”

Politico’s interviewees are afraid that Trump is normalizing Stalinist tactics, using phrases like “enemy of the people.” And while that may be true of a small number of his acolytes, most Americans don’t like Trump or his ways and certainly are not going to fall into lockstep. Many working class people who voted for him (not as big a group as the business classes and corporate news networks fondly imagine) are already regretting it, as he destroyed their access to health care insurance.

The reason for which Trump’s hope is forlorn is that, as Pew’s scientific polling demonstrates, the vast majority of Americans don’t like and don’t approve of Trump, whose ratings in the polls remain shockingly low for a sitting president at this point in his tenure. Concentrating only on one data point, of favorable/ unfavorable hides a great many key insights as to how despised Trump really is. 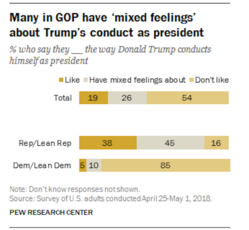 Fully 58% of Americans say that they have no or almost no areas of agreement with Trump. That is almost 6 in ten. And while the number has fallen from 77% last year this time, remember what we are talking about. I mean, Trump takes lots of stances on lots of things. Hell, there are things I agree with him about, like the desirability of getting out of Syria (assuming he really means it when he says that). Nearly 6 in 10 Americans are saying his positions are completely or almost completely alien to them.

Even 42% of Republicans say that they agree with him on some but not all issues. Given that 88% of Democrats have no or almost no areas of agreement with Trump, that so many in his own party demur from at least some of his major positions shows just how much of a minority president he is. He is fully supported only by 38% of Republicans, who in turn are only about 25% of Americans.

Full, unadulterated support for Trump and Trumpism doesn’t stand at 42% or 44% as the favorability ratings suggest. It is more like 9.5% if we ask about areas of agreement with him. And remember that is opposed to 58% who just throw up their hands and can’t get into anything he says.

Then there is the issue of widespread corruption. Among independents, a key swing vote that typically leans Republican, Two thirds (65%) view the Trump administration’s ethical standards as “not good” or “poor.” Only 32% demur.

On that issue of ethical standards, almost all Democrats (86%) say the Trump administration’s are “not good” or are poor. But even 25% of Republicans say this.

Overall, fully 58% of Americans view the Trump administration’s ethics as not good or poor. That number is substantially above a simple majority, on the way to a super-majority.

If a large percentage of Republicans approve of the Trump administration’s ethics, the same is not true of his conduct as president. 16% of the GOP actively dislike his conduct, and 45% have mixed feelings.

That is worth repeating. 61% of Republicans have mixed feelings about or are out-and-out mortified by Trump’s conduct as president.

And here is the percentage that disapproves of Trump on key issues:

Think poorly of his ability to handle an international crisis: 54%

Think poorly of his ability to work with Congress: 54%

(Remember, he has a Republican Congress!)

Americans are not going to stand at attention to any authoritarian leader. In a republic, a president is just first among equals, an employee of the people, who are not lesser in station than he.

But it is particularly absurd to think that the 9.5% who are knee-jerk supporters of Trump can impose themselves on the rest of us. Trump is a walking Titanic, and the only thing Americans will sit up for in his regard is the day he is handcuffed and frog-marched out of the White House to share a jail cell with his good buddy and former campaign chairman, Paul Manafort.