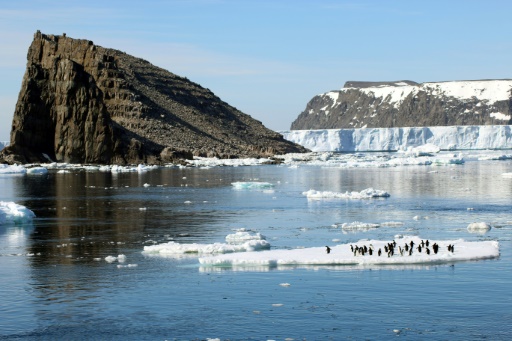 Paris (AFP) – Antarctica has lost a staggering three trillion tonnes of ice since 1992, according to a landmark study published Wednesday that suggests the frozen continent could redraw Earth’s coastlines if global warming continues unchecked.

Two-fifths of that ice loss occurred in the last five years, a three-fold increase in the pace at which Antarctica is shedding its kilometres-thick casing, a consortium of 84 scientists reported in the journal Nature.

The findings should dispel any lingering doubts that the continent’s ice mass is shrinking, the authors said.

They also highlight the existential threat facing low-lying coastal cities and communities home to hundreds of millions of people.

“We now have an unequivocal picture of what’s happening in Antarctica,” said co-lead author Eric Rignot, a scientist at NASA’s Jet propulsion Laboratory who has been tracking Earth’s ice sheets for two decades.

“We view these results as another ringing alarm for action to slow the warming of our planet.”

Up to now, scientists have struggled in determining whether Antarctica has accumulated more mass through snowfall than it loses in meltwater run-off and ice flows into the ocean.

But more than two decades of satellite data — the new findings draw from 24 separate space-based surveys — have finally yielded a more complete picture.

More than 90 percent of that frozen water sits atop East Antarctica, which has remained mostly stable even as climate change has driven up Earth’s average surface temperature by a full degree Celsius (1.8 degrees Fahrenheit).

Some studies had suggested a net gain in mass over recent decades.

West Antarctica, however, has proven far more vulnerable to global warming, especially the Antarctic Peninsula, where more than 6,500 square kilometres (2,500 square miles) of ice shelves have sheared off into the sea since 1995.

Already floating, ice shelves breaking off into icebergs do not add to sea level. But massive glaciers on West Antarctica slowly gliding seaward hold enough water to push oceans up by 3.5 metres (11 feet).

Two of these glaciers — Pine Island and Thwaites — have accelerated and are today seen as unstable. Together, they act as corks holding back ice mass further inland from falling into the ocean.

Nearly all of the mass shed over the last quarter century has come from West Antarctica, the study found.

Ice loss of 2.7 trillion tonnes since 1992 added about eight millimetres to sea level.

“Whilst there’s still considerable uncertainty about East Antarctica mass balance, it is increasingly clear that ice loss from West Antarctica has accelerated,” said Kate Hendry, a researcher at the University of Bristol, commenting on the findings.

On current trends, Antarctica could become the single largest source of sea level rise, ahead of runoff from the Greenland ice sheet and mountain glaciers, and the expansion of ocean water as it warms, the study found.

By century’s end, sea level — compared to a pre-industrial benchmark — could increase from a few dozen centimetres to a metre or more, depending in part on efforts to curb greenhouse gas emissions.

Under any scenario, oceans will continue to rise for several centuries, scientists say. 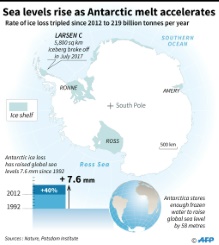 AFP / Sabrina BLANCHARD. Antarctica has lost a staggering three trillion tonnes of ice since 1992, according to a landmark study.

In the two decades prior to 2012, Antarctica lost about 76 billion tonnes annually, according to the new findings. Since then, that figure has jumped, on average, to 219 billion tonnes.

“There has been a step increase in ice losses from Antarctica during the past decade,” said Leeds University professor Andrew Shepherd, co-leader of the Ice Sheet Mass Balance Exercise (ISMBE).

“The continent is causing sea levels to rise faster today than at any time in the past 25 years.”

Scientists not involved with the study lauded its methodology.

“The power of this research is that it brings together independent methods and results from a collection of different teams throughout the world,” noted Twila Moon, a scientist at the US National Snow and Ice Data Center in Colorado.

“The outcome is deeply concerning,” commented Imperial College London professor Martin Siegert, who did not take part in the study.

“We appear to be on a pathway to substantial ice-sheet loss in the decades ahead, with longer term consequences for enhanced sea level rise.

“If we aren’t already alert to the dangers posed by climate change, this should be an enormous wake-up call,” he added.