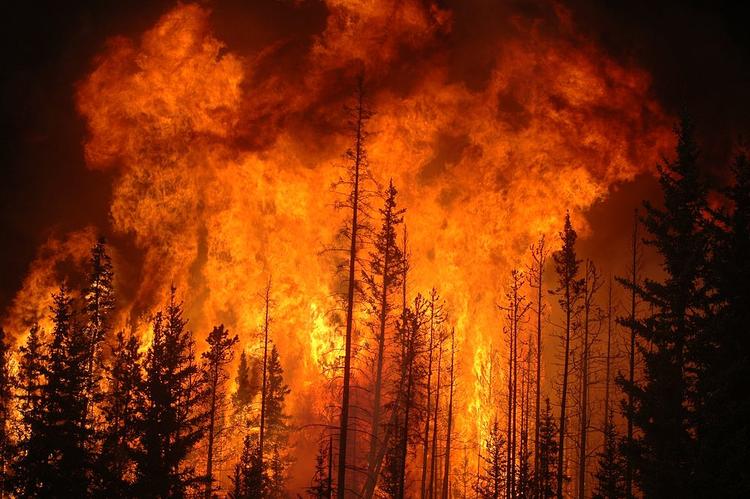 Ann Arbor (Informed Comment) – The American (and world) public was informed about the dangers of global heating 30 years ago this week, on June 23, 1988, by climate scientist James Hansen.

It turns out that Big Oil and other hydrocarbon industries were convinced of the dangers privately even before that, but hid their scientists’ findings from the public, causing trillions of dollars of damage to the earth.

Climate change is being driven in large part by the accumulation of heat-trapping gases in the atmosphere, including carbon dioxide and methane, put there by you and me. For all the period during which civilization among human beings, during the past 10,000 years, the parts per million of carbon dioxide in the atmosphere were roughly 260 or 270 ppm with slight fluctuations mainly caused by volcanoes burping up CO2 and methane. That concentration was typical until around 1750, when human beings got the bright idea to create energy for their civilizational projects by burning coal to drive steam turbines. They did create a lot of transformative new energy that way, giving us modern cities, factories, automobiles, electricity, etc. etc.

The average parts per million of carbon dioxide in our atmosphere this year stand at 410 according to NOAA. (Click quickly, before Trump abolishes NOAA and takes down the website). 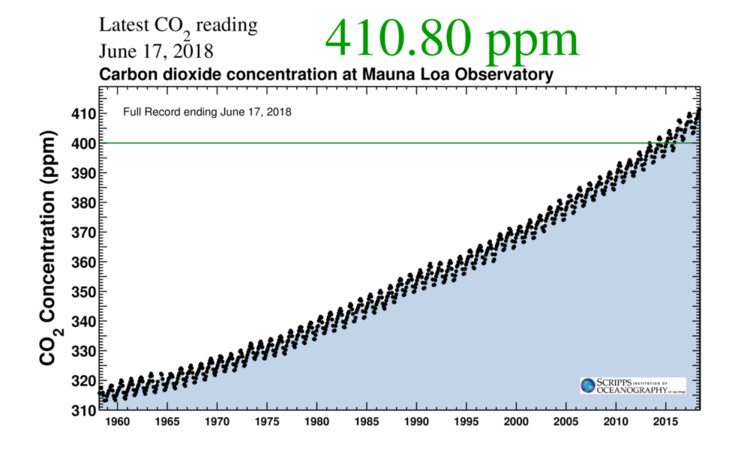 Each American on average puts 16 tons of carbon dioxide into the atmosphere every year. We are a carbon-emitting society.

Human-driven climate change is going to cause $120 bn. in damage to our coasts in the next two decades. Florida and Louisiana are in dire danger. Houston and Puerto Rico just last summer had a foretaste of things to come. Burning coal, natural gas and petroleum for energy causes average higher surface temperatures all around the earth. That higher temperature is melting the ice sheets of Antarctica, putting water into the oceans that used to be locked up on top of land. The seas are rising. As they themselves warm, moreover, they expand (hot water takes up more space than cold water). A conservative estimate is that in the next 80 years the seas will rise 3-4 feet. That doesn’t sound like much, but if your house on the coast of North Carolina is built on land 1 foot above sea level, then you’ve got fishies in your living room. Average sea level is also deceptive because a higher level makes storm surges bigger and more destructive.

The Southwest will be beset by wildfires and long-term droughts. The quality of most people’s lives will decline in a thousand small ways.

So if we know all this, why do not each of us in the US or other industrialized societies have a plan for reducing our farting out of carbon dioxide to the tune of 16 tons a year? A typical automobile weighs 2 tons, so that is like using a 3-D printer to create 8 automobiles a year of our carbon exhaust. Each.

I just am amazed that 30 years later I don’t see virtually anyone taking this civilizational crisis seriously. Global heating is a vastly bigger danger to us than terrorism or war, things we spend over a trillion dollars a year on.

You drive in a big city in the US and there are lines and lines of traffic pile-ups, all those internal combustion engines putting out CO2. You see television ads for cars that get 22 miles a gallon as if that is a breakthrough. There are still coal plants! Which should have just been declared illegal. Coal plants are vastly more dangerous than undocumented immigrants.

People drive by big factories with heavy polluted streams of CO2 and noxious chemicals being dumped into our atmosphere as though it were a huge sewer.

And nobody even gives it a second thought.

Our corporate media– CNN (ATT/Time Warner), MSNBC (Comcast NBC Universal), and Fox (Rupert Murdoch) all either assiduously ignore climate change or actively deny it. I presume the canny reporters who know exactly what is going on are being instructed by their editors and managers not to do stories that hurt their parent companies’ investments in ExxonMobil, BP and other high-carbon industries (which form part of almost any investment portfolio).

The fact is that ExxonMobil, BP and the others are based on assets that not only are worthless but actually harmful to human health. If investors suddenly realized this worthlessness, their stocks would collapse overnight.

Even my own institution, the University of Michigan, puts out like 610,000 tons of carbon dioxide a year and has no serious plans significantly to reduce that number any time soon. (They envisage still putting out 500,000 tons a year in the late 2020s). The University of Michigan is a state institution with 6,000 high powered faculty and researchers. But they are as blasé as everyone else in the US when it comes actually to doing something. Their football rivals, Ohio State, have leased a wind farm that will provide 25% of campus electricity. But Ann Arbor is shameless.

Given the nature of American society– materialistic, status-worshiping, and obsessed with being sexy, maybe it would help if some of the glitterati would do public service ads about how they would never dream of dating someone who farts out 16 tons of carbon dioxide a year.

Maybe some people are so daunted at the magnitude of the challenge that they just throw in the towel. But actually, the secret is that the challenge can be met and that we can even save money and improve our health (and looks) just by taking action.

It is fairly easy to cut that 16 tons down to almost nothing. Homeowners can put solar panels on their roofs. They pay for themselves in 5 or 6 years and now typically last 25 years. They are virtually maintenance free. Some 65% of Americans are homeowners. Apartment dwellers can form green co-ops. Some cities have made their own city-wide clean energy co-op and have plans to be 100% green by 2030. Solar panels turn sunlight into electricity. Once they are installed, they go on doing that for free. I have solar panels and my summer power bill is typically $14 a month.

Most Americans can use public transport. I bike to work eight months of the year. This idea of an hour-long commute may have to be jettisoned. Young people are already trying to live close to where they work. If you have to have a car, electric vehicles are falling in price and new ones are coming on the market. Even in heavy coal states like Pennsylvania and Michigan, electric vehicles are *always* less carbon intensive than gasoline automobiles. But if you combine an EV with solar panels, you pay off both quicker and both have little in the way of an electricity bill and you don’t have to pay for gasoline to run the car–and you don’t put out much carbon dioxide just getting around.

Because of the odd energy-intensive way we raise cattle, beef is very high carbon. Going vegetarian or sticking to chicken and fish vastly reduces our carbon output. Those summer days that the sun shines on my solar panels, I bike into work, and I have South Asian-style spicy lentils-and-rice for dinner, I figure are almost carbon-free days. I’m the first to admit there aren’t enough of them.

We can also buy carbon offsets via the Nature Conservancy, which I use to make up for flying. Planting vast numbers of trees will reduce CO2 for now, and if we can find a way to bury the dead trees of the future in a way such that they don’t release their carbon back into the atmosphere, that will help.

As consumers, we can use our purchasing power to punish dirty companies and reward clean ones. The Koch brothers, not only heat up the earth and change its climate unhealthily themselves, but they spread disinformation to stop the public from taking action. Don’t be buying Brawny or Quilted Northern paper towels!

Of course, we individuals can only go so far. We need to enlist the government and big institutions in the struggle to save civilization. Vote for environmentally conscious politicians, and after a while, solutions will be found that don’t require so much individual outlay.