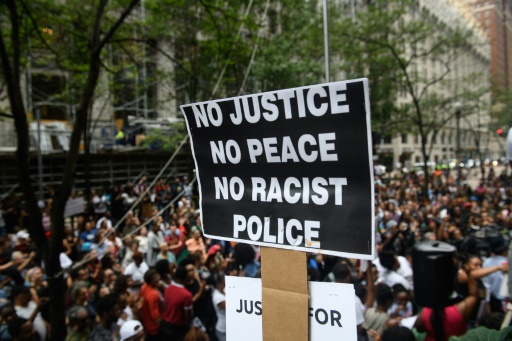 Paris (AFP) – The disproportionately high rate at which unarmed black people die at the hands of police in the United States has a corrosive impact on the mental health of black Americans, researchers reported Friday.

The frequency of these killings has been cited as symptomatic of deeply rooted racism, and is in any case perceived as such by most black Americans, they reported in The Lancet, a medical journal.

Audio or video evidence of such deaths over the last few years has given rise to the “Black Lives Matter” movement, whether in the form of street protests or National Football League players kneeling during the national anthem before games.

“We found that when police kill unarmed black Americans, there is mental health fallout that reverberates throughout the black American community,” said senior author Alexander Tsai, an associate professor of psychiatry at Massachusetts General Hospital and Harvard Medical School.

“This finding is significant because it shows that the effects of these killings go beyond immediate friends and family,” he told AFP.

Tallies kept by news organisations and researchers vary, but police have killed approximately 300 black Americans — about a quarter of them unarmed — each year since 2014.

As of July 2017, 61 percent of the US population self-identified as “white,” and 13 percent as “black”, according to the US Census.

Statistics show that black Americans have proportionally more encounters with law enforcement, which in itself increases the opportunity for violent outcomes.

A state investigation, for example, into policing practices in Ferguson, Missouri after the 2014 shooting death of an unarmed 18-year-old African American, Michael Brown, revealed that blacks were three-and-a-half times more likely than whites to be pulled over by police while driving.

Black American stand-up comics have long highlighted the perils of “DWB”, or “driving while black.”

To probe the mental health effect of police killings of blacks on the larger black American population, Tsai and colleagues compared two sets of data.

One was a national, 2013-2015 telephone survey of more than 100,000 black American adults that asked how many out of the previous 30 days were marked by stress, depression and emotional problems.

The other was a state-by-state tally of police killings from the Mapping Police Violence database.

Using statistical analysis, the researchers found a strong link between more days of poor mental health and deaths at the hands of law enforcement occurring in the 90 days prior to the interview.

This “spillover” effect was strongest 30-60 days after police killings in or near the state in which respondents lived.

Extended to the US black adult population, the findings suggest that police killings of unarmed black Americans could account for up to 65 million excess days of stress or depression per year, on a par with the mental health burden associated with diabetes, the study found.

“They undermine mental health among black Americans because they are a manifestation of structural racism,” he added.

Featured Image: GETTY IMAGES NORTH AMERICA/AFP / Justin Merriman. Police have killed approximately 300 black Americans — about a quarter of them unarmed — each year since 2014.