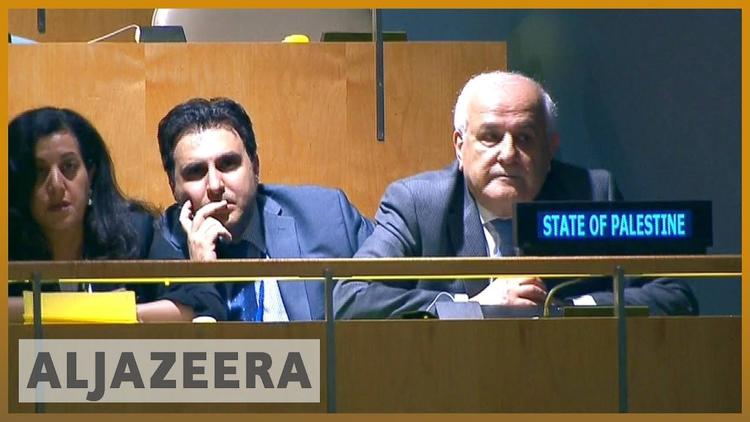 In a blow to the Trump administration and the government of Israeli Prime Minister Binyamin Netanyahu, the United Nations General Assembly overwhelmingly adopted, by 120 votes in favor, a resolution introduced by Algeria and Turkey condemning Israel for deploying excessive force against Palestinians at rallies near the border of Gaza.

After a thorough investigation, Human Rights Watch concluded that there are credible grounds for charging Israeli officials with war crimes at the International Criminal Court over the tactic of sniping at unarmed civilians who posed no immediate danger to Israeli troops (while over 100 Palestinians were killed and thousands injured by live ammunition since March, no Israeli troops appear to have been so much as injured).

The resolution was backed by 12 European states, including France, Spain, Switzerland, Sweden, Ireland, Norway, Finland, Portugal, and Greece. 16 European countries abstained, but none voted against the resolution.

Although the US and Israeli ambassadors to the UN attempted to deride the vote as mere anti-Semitism, in fact world leaders have been deeply disturbed by the naked Israeli violation of basic international legal norms in Tel Aviv’s response to the Gaza protests. For an Occupying power systematically to shoot down unarmed civilians in an occupied territory for mounting protests that posed no immediate danger to anyone is clearly a war crime under the Hague Regulations of 1907 and the Geneva Conventions of 1949. Indeed, repeated war crimes may amount to a crime against humanity.

The resolution instructed UN Secretary General António Guterres to institute some sort of protection for Palestinians from this use against them by Israel of indiscriminate and disproportionate force.

The resolution also condemned the firing from Gaza of rockets toward Israel.

The Israeli ambassador castigated the vote as tantamount to terrorism. “Instigation” has become right wing Israeli code for any condemnation of oppression of Palestinians, and is increasingly a thought crime in Israeli itself punishable by prison. Poets and bloggers are in jail for the same “crime” of which the UN General Assembly stands accused.

A similar resolution was supported by the UN Security Council, but the US cast the sole veto.

A US resolution condemning Hamas failed to receive the necessary 2/3s majority to be voted on.

American pro-Israeli propaganda, prominent in the editorial pages of the New York Times, attempts to blame the Palestinian party-militia Hamas for the deaths and injuries of Palestinians at the border rallies. However, Hamas did not set the rules of engagement of the Israeli army or force snipers to shoot unarmed medics, journalists, children, and ordinary protesters. The US press almost never mentions that 70 percent of the families in Gaza are refugees deliberately chased out of their homes in what is now southern Israel, and kept cooped up in the world’s largest outdoor prison.

In another important international vote, the 4 million strong Indian Student Federation has voted to boycott Hewlett Packard computers and other equipment on the grounds that the company is involved in the oppression of Palestinians by the Israeli occupiers. This step seems to me among the more significant victories for the boycott, divestment and sanctions (BDS) movement promoted by Palestinian civil society. BDS is not practiced by the State of Palestine itself.

The Indian student vote points to the significance of the UN General Assembly resolution, inasmuch as it will encourage more such civil society boycotts of Israel, which if they grow large enough could inflict substantial pain on the far right wing Likud government.