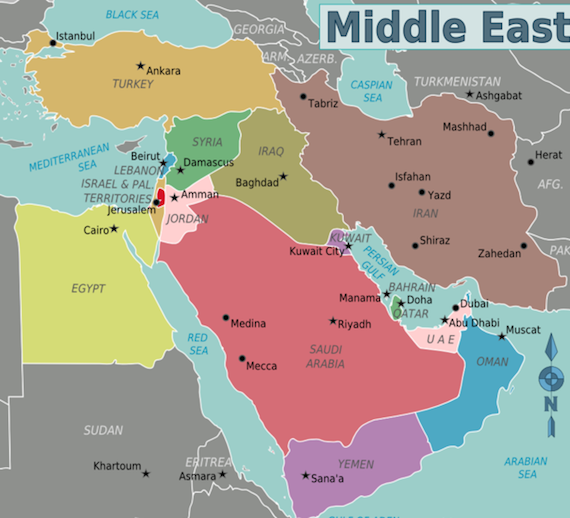 In the Washington Post last week, historian of the US Yoav Fromer of Tel Aviv University published an article about how the problem with the Middle East is too much democracy and not too little.

Fromer seems to take at face value George W. Bush’s policy of “democratization.” That was a slogan to cover the embarrassment of not finding unconventional weaponry in Iraq. Bush never promoted genuine democracy anywhere in the Middle East, and anyway it isn’t plausible that it could be promoted at the point of a bayonet. If Fromer is arguing against that policy, he may as well not have bothered. It was just a smokescreen. And if all he were doing were opposing ham-fisted American attempts to shape other peoples’ polities, he’d be right. Alas, I fear his line of reasoning leads in more alarming directions. It rather resembles Lord Curzon’s opposition to the Indian Councils Act of 1909 on the grounds that they might turn into “parliamentary bodies in miniature.” The Neo-imperial Raj in the Middle East should not be disturbed by democratizing reforms.

One of his points seems to be that public opinion in countries like Iran and Turkey does not take positions favorable to Trump administration goals, or favorable to Israel. As a result, he maintains that Trump needs to “contain” democracy in the Middle East rather than promoting it. Again, Fromer may as well not have bothered. Trump loves Arab strongmen almost as much as he loves Playboy bunnies.

Fromer blames Turkish President Tayyip Erdogan’s bromides against Israel as an Apartheid state on an attempt to appease public opinion in Turkey. The implication is that Erdogan is simply engaged in demagoguery and that the Turkish public is benighted. Since it doesn’t seem to be apparent in the hothouse atmosphere inside Israel, let me just suggest that pretty much everyone in the world except Republican Party members in the USA thinks Israel is an Apartheid state. Israel in opinion polls around the world ranks down with North Korea on favorability scales. This result comes not from anti-Semitism but from Israel’s attempt to go on maintaining Settler Colonialism as the official policy of the state when it isn’t, really, you know, 1850 any more. Neither Erdogan nor the Turkish public is in any way exceptional in this regard. That people in Turkey recognize what is going on in the Palestinian West Bank is if anything a sign that they are ready for democracy.

If Washington needs to “contain” democracy in the Middle East to stop people from seeing Israeli Apartheid toward the Palestinians, then apparently the US military should also immediately attack Canada, Ireland and Sweden and install a right wing dictator who might be friends with Trump and Netanyahu. (Sweden, by the way, has been ranked in polling as the least anti-Semitic country in Europe).

Worse, Fromer thinks Israel is the only functioning democracy in the Middle East. But opinion polls have found that when asked if they would support formal Apartheid, the Israeli public says yes! You can’t be a functioning democracy in the 21st century when you’ve been ruling militarily for half a century over 4.5 million people you’ve kept stateless and your own population is only 8 million, 6 million of them Jews (and a million of them possibly absentees).

Fromer is out of date. Tunisia has had successful elections, a new constitution, a vibrant civil society, and it is certainly a functioning democracy by the definition of transitologists. Moreover, Tunisia has the advantage of not practicing Apartheid and having a freer press than Israel, which is under military censorship.

And seriously, the fault here lies with Iranians rather than with the feckless Trump, who violated the US treaty with Iran on its civilian nuclear fuel program? Why shouldn’t Iranians see nuclear latency as a deterrent measure, if they can’t trust the US to stand by its word?

Iranians had their country partitioned between the British and Russian Empires in 1907 and had their elected parliamentary government overthrown by the CIA in 1953, and watched in 2001 and 2003 as the Bush administration sent the US army to invade their neighbors (Afghanistan and Iraq), overthrow their governments and occupy their territory. If Iranians think a nuclear potential might save them from having happen to them what happened to Mosul in Iraq, then obviously they will want it. Nuclear weapons are defensive, not offensive.

But Fromer is being a little disingenuous to suggest that this finding has anything to do with democracy. If you asked the Israeli public if they should give up their several hundred nuclear warheads, they certainly would say ‘no.’ I suspect the same is true of France and the United States.

Ironically, the most vehement denunciations of nuclear weapons and prohibition on making, stockpiling or using them comes not from the general public in Iran but from the clerical establishment.

Fromer denounces Hamas’s 2006 electoral victory as an indictment of democratization. But what went wrong was not the Hamas victory at the polls, which could have led it into peaceful political activity, but that Israel essentially staged a coup against the elected government, kidnapped parliamentarians, and, when the coup failed in Gaza, blockaded the tiny strip and subjected its people to a cruel blockade that continues until today. The failure here has nothing to do with allowing Palestinians to vote in 2006 and everything to do with a concerted attempt to undermine any Palestinian steps toward democratic sovereignty.

Fromer’s is a cruel argument in a region where Fromer’s government actively opposed the Arab Spring (Netanyahu put enormous pressure on Obama to back Hosni Mubarak to the last). Egypt, which Fromer does not mention, has become one of the more repressive countries on earth. Opinion polling of its public would find much critique of Israel and the US, but the Egyptian public has been safely contained by Field Marshall Abdel Fattah al-Sisi, who has excellent relations with the Israeli high command. Al-Sisi’s goons have jailed tens of thousands of people and are sneaking around at night kidnapping bloggers. They even murdered an Italian graduate student for asking questions about labor rights. Fromer has nothing bad to say about the the absolute monarchy in Saudi Arabia, which has now tacitly allied with Israel against Iran and “contained” its population, which it regularly flogs and beheads.

Apparently Egypt is the sort of society Fromer wishes on the whole Middle East. Apparently, so does his government. And if that is so, he shouldn’t be surprised that his government is so disliked by people in the region.