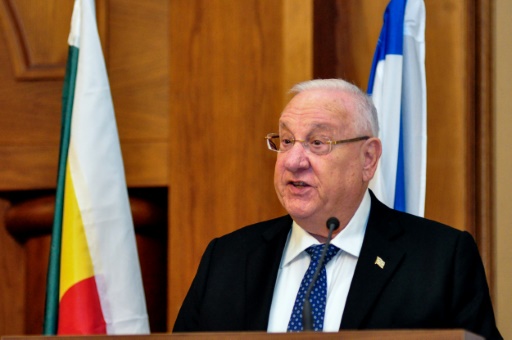 Jerusalem (AFP) – Israel’s president raised alarm Tuesday over a proposed law seen as opening the door to the establishment of Jewish-only communities in the country.

Reuven Rivlin’s comments marked a rare intervention in politics by the country’s president, whose role is mainly symbolic.

He voiced his concerns in an open letter, pointing to a clause in proposed legislation defining Israel as the “national home of the Jewish people”.

The so-called nation-state law, which the government hopes to have approved by the end of the month, could become part of the country’s basic laws which serve as a de facto constitution.

The clause Rivlin criticised would allow the state to “authorise a community composed of people having the same faith and nationality to maintain the exclusive character of that community.”

That was seen as allowing towns to exclude Arab citizens, who account for some 17.5 percent of Israel’s population, or even other Jewish communities.

Rivlin said that the legislation “could harm the Jewish people worldwide and in Israel, and could even be used as a weapon by our enemies.”

“Do we want to support the discrimination and exclusion of men and women based on their ethnic origin?” he wrote.

He said the bill could allow the establishment of towns that would, for example, exclude Jews of Middle Eastern origin, ultra-Orthodox Jews or homosexuals.

Attorney General Avichai Mandelblit has also said he is opposed to the law in its current form.

Avi Dichter, a lawmaker from Prime Minister Benjamin Netanyahu’s Likud party and the bill’s sponsor, said the clause was aimed at “allowing a Zionist population to live without having a population at its side that is not ready to defend the country’s borders.”

Israeli Arabs largely support the Palestinian cause, and right-wing Jews often accuse them of disloyalty.

Netanyahu supports the bill but has not commented on the clause in question.

The government is hoping to win approval for the bill during the current parliamentary session, which finishes at the end of July.

Negotiations on potential amendments are ongoing.

A separate part of the legislation that would designate Hebrew as Israel’s only official language, granting only “special status” to Arabic, has also raised concerns.

Dichter says the law aims to defend Israel’s “status as a Jewish and democratic state.”