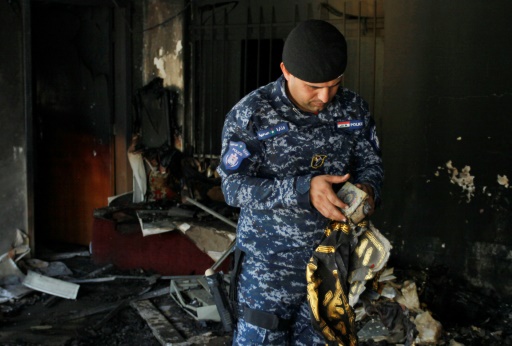 Months after Iraq declared victory over the Islamic State group, attention has turned from the military battle to the fight for jobs and public services.

Thousands of people rallied in fresh protests Monday in the eastern province of Diyala and the southern city of Nasiriyah, according to AFP correspondents.

Iraqis already made their dissatisfaction with their leaders known through massive abstentions in May’s national elections, and now citizens are taking to the streets to demand they see benefits from the country’s vast oil reserves.

“These oil fields belong to us, yet we get nothing,” said Hussein Ghazi, a 34-year-old protester in the port city of Basra.

The oil sector accounts for 89 percent of the state budget and 99 percent of Iraq’s export revenues, but only one percent of jobs, as the majority of posts are filled by foreigners.

Officially, 10.8 percent of Iraqis are jobless, while youth unemployment is twice as high, in a country where 60 percent of the population is aged under 24.

For the demonstrators, who have taken their campaign to the headquarters of political parties across the southern provinces, setting some on fire and ripping down political posters, corruption is central to their plight.

AFP / Haidar HAMDANI. An Iraqi policeman holds a recovered holy Koran from the premises of the Islamic Dawa Party that was torched during protests in the central shrine city of Najaf on July 14, 2018.

Following the US-led invasion of Iraq in 2003, the country’s new leaders and public servants reaped the benefits of public funds and natural resources, leaving citizens with only basic infrastructure, according to protesters.

“We hear a lot of grand words, but we don’t see anything coming,” said Basra demonstrator Aqil Kazem, an unemployed 27-year-old.

Chronic electricity cuts continue to leave Iraqis without respite from summer temperatures, which during the protests have reached 50 degrees Celsius (122 Fahrenheit).

Iraqis have also suffered from water shortages this year from drought and dams built by neighbouring countries.

Since the daily protests began on July 8 in Basra, eight people have been killed in various cities, according to the health ministry.

The ministry did not however give details on the circumstances of the deaths, but according to different sources at least one person was shot dead by security forces in Basra.

That death, as youths demonstrated in Basra demanding jobs and against electricity cuts, fuelled the protest movement and it spread to provinces across the south: Dhi Qar, Karbala, Maysan, Muthana and Najaf.

Prime Minister Haider al-Abadi flew into the city on Friday in an effort to restore calm, a day later announcing investment worth $3 billion (2.6 billion euros) for Basra province.

He also pledged additional spending on housing, schools and services in the oil-rich but neglected region.

As demonstrations continued, Abadi on Sunday met with security and intelligence chiefs in Baghdad and warned them to be on alert “because terrorists want to exploit any event or dispute”. 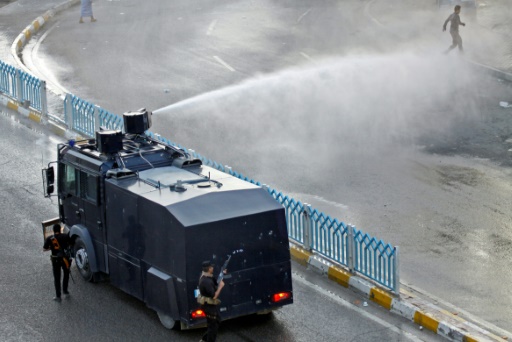 AFP / Haidar HAMDANI. Demonstrators are sprayed with water cannon by the Iraqi security forces during protests in the central shrine city of Najaf on July 14, 2018.

The prime minister also ordered security services not to use live fire against unarmed civilians.

On Saturday the internet was cut across the country, as demonstrations threatened to spread. Authorities said the shutdown was owing to maintenance work and Iraq was back online Monday.

Despite the internet blackout, hundreds of protesters in Baghdad closed a highway on Sunday as they chanted slogans such as: “The people want to overthrow the regime”.

The demonstrators have won the backing of Iraq’s top Shiite authority, Grand Ayatollah Ali al-Sistani, who has also called on them to refrain from violence.

The latest rallies follow a 2015 protest movement against corruption and the absence of public services, led mainly by nationalist Shiite cleric Moqtada Sadr who won this year’s elections on an anti-graft ticket.