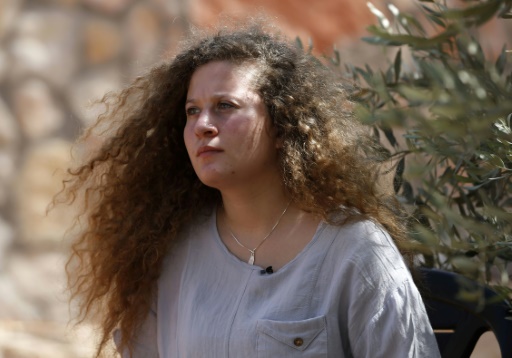 Nabi Saleh (Palestinian Territories) (AFP) – Palestinian teenager Ahed Tamimi said Monday she was deeply changed by her eight-month sentence in an Israeli jail for slapping two soldiers, but does not regret any of her actions.

Tamimi, who was 16 when she was arrested in December for hitting and kicking soldiers in front of her house in the occupied West Bank, was released Sunday and swarmed by media from across the globe.

In an interview the day after her release, the now 17-year-old told AFP that she understood she had become a “symbol” of the Palestinian cause.

“I became more focused, more aware also. Prison ages a person. In one day you age 100 years,” she said in the backyard of her home in the West Bank village of Nabi Saleh.

Asked if she would have done the same thing if she had known it would land her behind bars for months, she said yes.

She pointed to the circumstances in which the soldiers had entered the garden of her house in December during a day of major protests that saw her cousin shot in the head with a rubber bullet.

Her confronting of the Israeli soldiers was recorded and went viral online.

“I didn’t do anything wrong that I should regret,” she said.

“If I had known I would be in jail eight months, of course I would have done it because it was a natural reaction to a soldier being in my house shooting at people, people from my village,” she said.

“Any person in this situation — I hit him, maybe there are people that would have killed him.”

Israel’s military said the two soldiers had been in the area to prevent Palestinians from throwing stones at Israeli motorists.

The video of the altercation does not show the soldiers reacting to Tamimi’s actions or using their weapons, and the teenager was arrested four days later.

Tamimi said she hoped to study law to expose the issue of Israel’s occupation to the rest of the world.

Israel has long said Tamimi and her siblings have been manipulated by her parents — longtime activists — and used as pawns in staged provocations.

When she was only 14, a picture of her biting a soldier’s hand to prevent him from arresting a family member went viral.

She denied claims that she had been exploited.

“My family never exploited me once,” she said.

“I am mature enough and I know the cause. I know the consequences that will stem from choosing this path. I am not a child.”

Tamimi and her mother Nariman were sentenced to eight months by an Israeli military court in a plea deal following the December incident.

Israel has occupied the West Bank and east Jerusalem since seizing it in a 1967 war. Tamimi’s village Nabi Saleh is close to a number of Israeli settlements.

Even though she’s only 17, Tamimi’s stint in jail has made her one of the best-known living Palestinians.

Palestinians and their supporters see her as a hero standing up to the Israeli army unarmed.

Many Israelis view her with contempt and some accuse her activist family of being supporters of “terrorism.”

Last week a 14-foot (4-metre) mural of her was painted on Israel’s separation wall that cuts off the West Bank. The Italian artists who painted it were arrested by Israel.

After her release on Sunday, throngs of media and supporters rushed to catch a glimpse of her and greet her.

At times when speaking to AFP she sounded like a budding Palestinian politician, at others like the teenager she is.

She said she still loves football and was crazy over the World Cup — watching the games when possible in jail and supporting Brazil and Neymar in particular.

One of the first things she did after leaving prison was visit an ice cream parlour in central Ramallah, the West Bank city where the Palestinian government is based.

“Of course there is no ice cream in prison ever. I love it a lot. When it was summer I would avoid food. I would only eat ice cream for breakfast, lunch and dinner,” she said.

Asked if she had a message for Israelis who think of her as a “terrorist”, she said she would ask them to “put themselves in my place, just that, nothing more”.

“Go back to their humanity a little so they can understand the reality.”