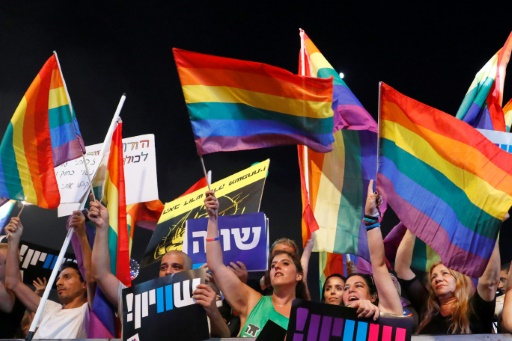 Tel Aviv (AFP) – Israelis demonstrated and held a one-day strike on Sunday to protest a law denying surrogacy to gay couples, with thousands attending a rally in Tel Aviv.

Police did not give an estimate of numbers at the city’s central Rabin Square, but Haaretz newspaper put the attendance at 60,000.

A police statement said that large numbers of officers were deployed to “ensure the safety of participants and maintain public order”.

Israeli media showed dozens of protesters at each of a number of locations throughout the country, including those shouting “shame” and waving rainbow flags. 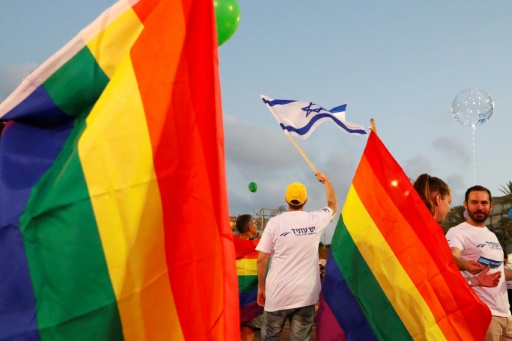 AFP / JACK GUEZ. Participants attend a demonstration in Tel Aviv on July 22, 2018, to protest a new surrogacy law that does not include gay couples.

At Rabin Square, a regular venue for protests or celebrations, demonstrators brandished rainbow flags and some held a banner reading “We are family.”

The rally came after parliament on Wednesday approved surrogacy for single women or those unable to bear children — without granting the same right to same-sex couples or single men.

Previously, only heterosexual married couples were able to use a surrogate.

Around 200 companies announced they would allow their employees to not work to protest, without it counting against their vacation days.

Sunday is already a semi-official holiday in Israel as Jews mark Tisha B’av, which commemorates the destruction of the two biblical-era temples.

“It is a symbolic measure, but one that shows real support,” Julien Bahloul, spokesman for the Association of Gay Fathers in Israel, told AFP.

Some companies said they would contribute up to around $15,000 to help gay couples forced to seek surrogacy abroad.

Bahloul said gay couples wanting to have children must find a surrogate mother abroad and the costs can rise to more than $100,000. Costs would be cut in half if it were allowed in Israel, he said.

At Sunday’s Rabin Square rally one demonstrator said the protest was about not only the new law, but also the place of the gay community in Israeli society.

“We are demanding equality for the LGBT community,” Chen Arieli told AFP.

“It’s not about surrogacy, it’s about security in the streets,” she said.

A 16-year-old girl was stabbed to death on a 2015 pride march in Jerusalem by an ultra-Orthodox Jewish man who also stabbed five other people and is now serving a life sentence.

Israel has been a trailblazer when it comes to gay rights, but same-sex relationships remain a taboo among religious conservatives who prop up Prime Minister Benjamin Netanyahu’s right-wing government. 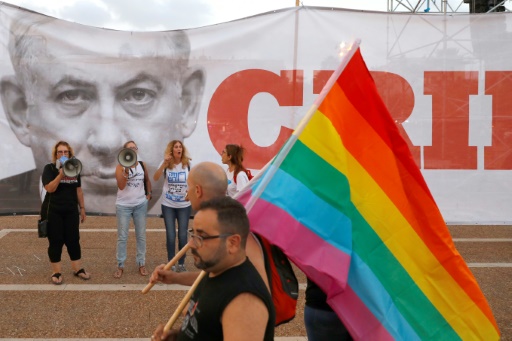 AFP / JACK GUEZ. Participants attend a demonstration in Tel Aviv on July 22, 2018, to protest a new surrogacy law that does not include gay couples.

The premier relies on ultra-Orthodox Jewish parties Shas and United Torah Judaism, both of which oppose families with same-sex parents.

Opposition MP Ofer Shelah, of the centrist Yesh Atid party, said he had gathered signatures from a sufficient number of lawmakers to force Netanyahu to answer questions on the issue in a parliamentary debate.

“We shall not let Netanyahu avoid giving an answer on the blatant discrimination against the LGBT community over the surrogacy law,” he said in a statement.

“The debate is only the beginning of a process,” he wrote, adding that the ultimate aim was “changing the law and ending the discrimination.”

Israel’s Channel 11 public television said that the Israeli Supreme Court was to hear this week petitions against the law from two male couples.

Featured Photo: AFP / JACK GUEZ. Participants attend a demonstration in Tel Aviv on July 22, 2018, to protest a new surrogacy law that does not include gay couples.

Andrea Bernardi Is an AFP correspondent and video coordinator for Israel and Palestine.