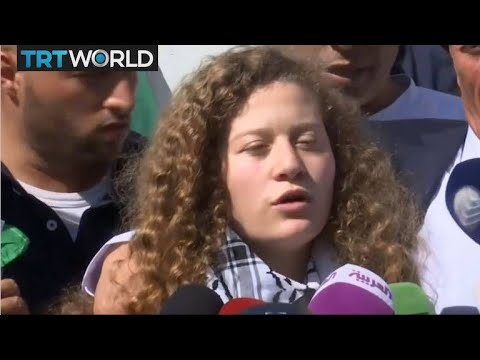 Ahed Tamimi and her mother were given petty and mean-spirited sentences of 8 months by a colonial Israeli military judge presiding over stateless, occupied people who are intensively patrolled by the Israeli jackboot while their land, water, and well-being are gradually stolen from them by the judge’s cousins. Tamimi as a 17-year-old girl slapped a couple of Israel Occupation personnel attempting to barge into her home. She and others had participated in a demonstration against Israelis squatting nearby on Palestinian land and encroaching on her home town, during which there was some stone throwing at the Israeli troops who came to stop people from protesting. Those troops shot her cousin in the head with a rubber bullet. That was when Ahed went out and slapped them.

1. Tamimi finished high school in jail! She organized a study group of other young women, and she succeeded in completing the high school examination while imprisoned. She turned her dreary sentence, intended to deprive her of nearly a year of her youth, into an educational opportunity. Lesson One: Any time you have free time on your hands, use it for self-improvement rather than stewing over your predicament.

2. That achievement, of completing high school in jail, did not come without struggle (nothing in her short life has). She said, “I was afraid I would miss the school year, so I managed with a group of prisoners to study. We challenged the occupation, which tried to ban us from study.” She is indicating that colonial, illegitimate Israeli prison officials actively tried to stop her from studying, and that she organized some sort of effective protest such that someone overruled the anti-intellectuals. (I say “colonial” and “Illegitimate” because they are not from the Palestinian West Bank, which they illegally occupy, since they have held it for 50 years and have altered its people’s lifeways dramatically). Lesson Two: If someone treats you unreasonably and unjustly, organize and protest.

3. Tamimi said she intends to go to law school and that she hopes to specialize in human rights law so that she can defend Palestinian activists and prisoners on the international stage. Lesson Three: When you encounter injustice, acquire the social and legal tools to combat it!

4. She said that prison taught her to love life, since she was nostalgic for her own room, her friends and her books. Lesson Four: Stop and take a moment to appreciate the good things in life, since they could go away at any moment. We’re often so stuck in our grievances about the past or so anxious about the future that we don’t bother to Be Here Now.

5. On her arrival in her home town of Nabi Saleh, she said, “I am a witness that the Resistance will continue until the end of the Occupation.” Lesson 5: Never give up hope in the victory of a just cause. The British occupied Bengal for 200 years, but in the end were forced to leave by the Indian Freedom Movement. The French took Saigon in 1859 but were forced to leave in 1954. The Palestinians will not be stateless and helpless forever.

It is not easy to send money to Palestinian causes, since the big American financial corporations are partisans for keeping the Palestinians down, buying into Israeli discourse about these people the Israelis have warred on, displaced, and occupied being irrational and dangerous. One of the purposes for which the Israelis keep Palestinian stateless is precisely that stateless people don’t have the right to have rights– and certainly not the right to securely hold property or receive money transfers.

But if there were a way to set up a donation account to establish a fund to send Ahed to law school, I’d give, and it would be a great good thing.