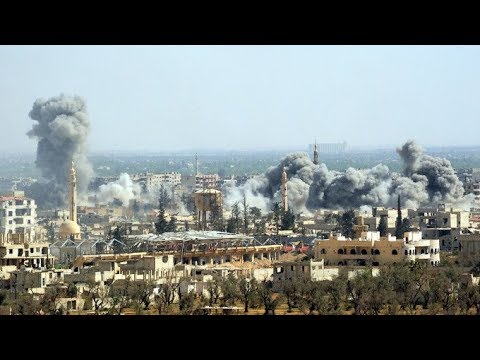 London ( al-Bab.com) – The OPCW has now issued an interim report on the alleged chemical attack in Douma, Syria, last April. Although the investigation is not yet complete, laboratory tests so far have found possible evidence of chlorine use but no evidence of sarin or a similar nerve agent. The OPCW also visited two sites which the Syrian authorities suspected of being used by rebels to produce chemical weapons and found “no indication” that the claim was true.

The report says investigators obtained 129 samples for analysis but so far only 29 of them have been tested. These were the samples considered to be “of the greatest probative value or of the highest susceptibility to degradation”. (Chemical degradation was a concern because investigators were unable to gain access to the relevant areas until two weeks after the alleged attack.)

Dozens of people were reportedly killed in the Douma attack on April 7, and the US, Britain and France responded with airstrikes. The attack on Douma was widely claimed to have been carried out by Syrian forces using chlorine gas, though there were also claims that the nerve agent sarin had been used too. Chlorine is not officially designated as a chemical weapon – it is a common substance with multiple civilian uses – but the Chemical Weapons Convention nevertheless prohibits its use in warfare.

Three days after the alleged attack Russia said it had sent a “chemical corps commission” to investigate in Douma and had “found no traces of chemical poisoning with chlorine or sarin”. Russia has also claimed that videos apparently showing casualties were faked.

Previous OPCW reports have confirmed the use of sarin on several occasions in Syria, most notably in Ghouta in 2013 and Khan Sheikhoun last year. Chlorine attacks have been much more common and, according to the OPCW, chlorine has been used “systematically and repeatedly” during the conflict.

Of the 129 samples from Douma, 86 were environmental and 43 were biomedical. All but five of the environmental samples were collected by OPCW investigators, with a full chain of custody:

“Samples were collected, sealed, and documented in photos and video recordings in the presence of Syrian Arab Republic representatives, and unpacked at the OPCW Laboratory for splitting and redistribution to the OPCW designated laboratories in the presence of the Permanent Representative of the Syrian Arab Republic to the OPCW.”

The biomedical samples from people allegedly exposed were received or collected outside Syria, and the report says OPCW investigators “directly oversaw the drawing of blood samples”. The report lists 12 samples as having been collected by investigators (i.e. directly), with the other 31 “handed over” by third parties. Biomedical samples included blood, plasma, hair and DNA. So far, nine plasma samples have been tested (four of them collected by the OPCW itself) and the report says “no relevant chemicals” were found.

On the question of nerve agents, the report says:

“No organophosphorus nerve agents or their degradation products were detected, either in the environmental samples or in plasma samples from the alleged casualties.”

On chlorine, it says “various chlorinated organic chemicals” were found in samples from two locations, along with residues of explosive. This could indicate use of chlorine as a weapon but it is by no means conclusive and the report adds: “Work by the team to establish the significance of these results is ongoing.”

A clearer picture regarding chlorine should emerge when the OPCW reports on interviews with witnesses and the symptoms of alleged casualties.

There is also a continuing investigation into two yellow containers, described by the report as industrial gas cylinders, which are alleged to been involved. One was found lying on a top-floor patio (see video above) and the other on a bed in a top floor apartment (see video below). The OPCW report says:

“Close to the location of each cylinder there were crater-like openings in the respective reinforced concrete roofs. Work is ongoing to assess the association of these cylinders with the incident, the relative damage to the cylinders and the roofs, and how the cylinders arrived at their respective locations.”

One of the cylinders was featured in a recent New York Times report along with photographic evidence suggesting at least 34 people had died in the building.

Syrian government officials did not allow OPCW investigators full access to one of the sites, because some of the apartments were found to be locked up. “The Syrian Arab Republic representatives stated that they did not have the authority to force entry into the locked apartments,” the report says.