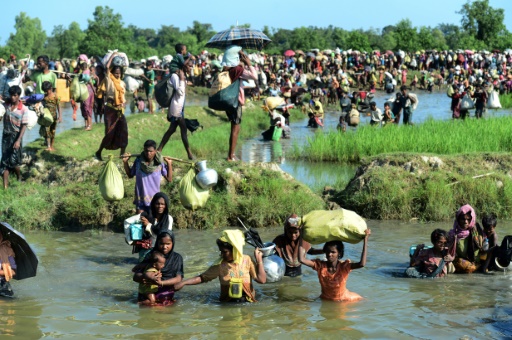 Bangkok (AFP) – Myanmar’s military engaged in “extensive and systematic” preparations for a bloody crackdown on Rohingya Muslims, a rights group said Thursday, in a damning new report that it says justifies a genocide investigation.

A bloody military campaign that started last August forced some 700,000 of the effectively stateless minority over the border into Bangladesh, where they have recounted allegations of rape and extrajudicial killings.

The UN and US have called the campaign ethnic cleansing. Myanmar denies the accusations, saying it was responding to an attack by Rohingya militants.

But Fortify Rights said its report, based on months of research in Myanmar and Bangladesh and hundreds of interviews with both victims and authorities, found that security forces disarmed Rohingya civilians and trained non-Rohingya communities to fight.

The Myanmar army also cut off food aid from Rohingya and removed fencing from their homes for a clearer line of sight, according to the report.

“Myanmar authorities made extensive and systematic preparations for the commission of mass atrocity crimes against indigenous Rohingya civilians during the weeks and months before Rohingya militant attacks on August 25, 2017,” Fortify said.

The report also said that deadly August attacks by the Arakan Rohingya Salvation Army, which Myanmar has cited as a reason for its counteroffensive, was a far more ad hoc operation than previously believed, and that crackdown plans were already under way.

Fortify co-founder Matthew Smith told journalists at the report’s launch in Bangkok that security forces made the Rohingya Muslim population in Rakhine weaker and vulnerable to attack.

The Rohingya have long lived in Rakhine but are seen as outsiders in Buddhist-majority Myanmar after years of marginalisation propaganda from successive military regimes.

Fortify echoed calls by other organisations for the UN Security Council to refer the case to the International Criminal Court, singling out 22 military and police officials as responsible, including armed forces chief Min Aung Hlaing.

Rights groups have used the phrase crimes against humanity to describe the expulsion of the Rohingya but many have stopped short of the term genocide.

UN special rapporteur to Myanmar Yanghee Lee warned last month that chances of generals seeing the inside of a courtroom in the Hague are slim, with the nation shielded by powerful allies who she declined to name.

A Myanmar government spokesperson did not respond to a request for comment.

The report also condemned Rohingya militants for the alleged killing of Rohingya civilians they claimed were government informants.

Myanmar’s government has also blamed ARSA for the slaughter of dozens of Hindus in Rakhine after they were found in mass graves.

The Arakan Rohingya Salvation Army has denied committing any abuses against non-combatants.

Featured Photo: AFP/File / MUNIR UZ ZAMAN. A bloody military campaign that started last August forced some 700,000 of the effectively stateless minority over the border into Bangladesh, where they have recounted allegations of rape and extrajudicial killings.