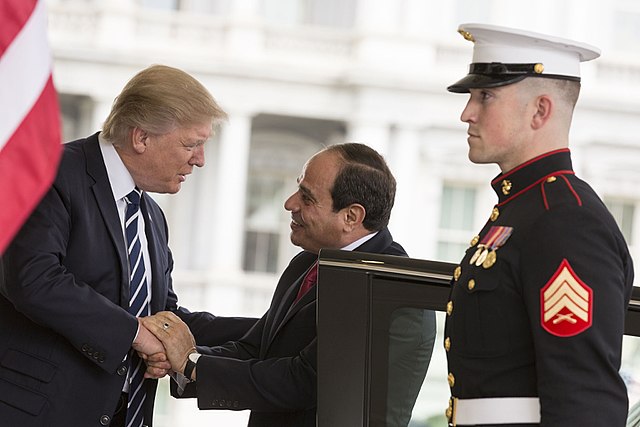 Donald Trump has shown little interest in encouraging democratic politics and human rights in other countries. This departure from decades of American foreign policy rhetoric has received comparatively little attention. However, in the Middle East, my area of expertise, I believe this Trump policy shift helps make countries less open and safe.

Most criticism of Trump’s foreign policy has focused on two other major departures from decades of past American practice.

First, Trump has rejected the cornerstones of the post-WWII international order largely built by the U.S.: deep alliances among Western democracies and global free trade. Second, Trump has shown an affinity for authoritarian rulers, including Russia’s Vladimir Putin, which has undermined American interests.

Yet, the Trump Administration’s abandonment of support for democracy and civil rights hurts the interests of both Middle Easterners and Americans.

Did the US walk the walk?

In the past, U.S. leaders and officials within the government have shown interest in political rights and government accountability in other countries. Such talk has nonetheless often taken a back seat to considerations of geopolitical power or resources.

Perhaps the lack of attention to current U.S. disregard for democracy and rights in the Middle East has to do with Washington’s inconsistency and perceived hypocrisy in the region.

Even before the U.S. became a superpower after World War II, Western countries like England and France trumpeted democratic values while engaging in colonial control of the Middle East. This left a legacy of local suspicion regarding the sincerity of Western leaders’ stated political values.

The U.S.’s own track record in the region of allying with repressive governments, mounting coups (as in Iran in 1953) and overthrowing leaders by force (as in Iraq in 2003) are among examples where the U.S. practiced a politics other than what it preached.

At best, the U.S. has embraced democratization and human rights as one of many goals in the Middle East. More cynically, democratic talk could be seen as a cover for more imperialistic policies in the region during and after the Cold War.

Yet these days even the pretense is gone that U.S. policy in the Middle East – or elsewhere – should advance political freedom.

When asked about why he refuses to criticize repressive rulers like Putin or Egypt’s President Abdel Fattah el-Sisi, Trump’s response is to question whether “our country’s so innocent.” Denying that the U.S. is distinguishable from countries that penalize dissent, the current American leader disavows the very project of advancing democratic values abroad.

Let me be clear that I am not suggesting that Middle Easterners should be, or are, dependent on foreign countries or activists for greater political rights. If so, why does an end to Washington’s inconsistent support for democratic politics and rights in the Middle East matter?

There are several reasons.

That means Human Rights Watch, the World Justice Project and local movements these groups help can improve human rights and legal accountability in part because they have allies in Washington’s broader political culture.

Second, advocates for democratic rights exist within the U.S. government, and enjoy influence, even if their superiors are less constant in their support for democracy abroad.

So, groups within the State Department, and government organizations like USAID or the United States Institute for Peace, work to improve citizen capacity and rights in places like the Middle East. In more rights-oriented presidencies, such groups can affect broader government policy.

Even in administrations less focused on human rights, the rhetoric of support for democracy can be politically useful or persuasive. President George W. Bush partly justified American military overthrow of Iraq’s Saddam Hussein in 2003 with the argument that a more democratic Iraqi government might help transform the broader Middle East.

Third, the lack of U.S. predictability around political rights in the Middle East can actually deter governments dependent on good relations with Washington from repressing their citizens. That’s because they can’t be entirely sure about political consequences. Tacit approval by the US of human rights abuses could turn overnight into condemnation.

For example, Egypt’s pre-2011 authoritarian leader Hosni Mubarak was known for political oppression. But he could not undermine democratic and human rights activists in his country altogether. He knew that, in a U.S. that provided billions of foreign aid to Egypt, at least some policymakers scrutinized his coercive practices.

Is it actually significant that the White House ignores political rights and freedom?

In the Middle East, the difference is large and palpable.

For one thing, increased deference to authoritarian leaders in the Middle East by the world’s most powerful democracy has allowed for the pursuit of deadly warfare and attacks on civilians. This is apparent in the actions of Syrian leader Hafez el-Assad, who has not hesitated to use chemical and other extreme weapons on his population.

Meanwhile, the Saudi government uses U.S.-supplied weapons to wage war in Yemen. The White House has not responded to the devastating civilian casualties.

More broadly, the U.S.’s current lack of interest in political rights emboldens Middle Eastern governments to crack down on dissent, and to combat aggressively countries that critique such crackdowns.

Egypt under President Sisi is more repressive politically than it was prior to 2011 under Mubarak. Prince Salman of Saudi Arabia may be committed to increasing Saudi prestige and the selective enhancement of less puritanical social mores. Yet he also has shown little tolerance for political opposition.

When the Canadian foreign ministry tweeted critically about Saudi political arrests, the Saudis countered by expelling the Canadian ambassador and suspending trade, flights and Saudi student exchanges with Canada.

Such a strong reaction is hard to imagine in the days when at least pockets of the U.S. government showed concern about human rights in the Middle East. In this instance, the Trump Administration refused to support support Canada, its democratic neighbor.

The upshot is that Middle Easterners have grounds to believe that Washington cares little for their basic well-being, their hopes for more responsive political systems and, in Syria and Yemen, their very lives.

The volcano of popular resentment against authoritarianism that erupted most notably in 2011, known as the Arab Uprisings, may have been capped temporarily. It has not quieted.

People in the Trump Administration purport to care a great deal about potential violence from Middle Easterners. This is why it is puzzling that they side strongly with unelected leaders willing to use intimidation and violence to quell dissent.

It is tempting to argue that the inconsistency of U.S. efforts to further democratic values means that these efforts don’t matter.

At least in the Middle East, racked by ongoing war and increasing influence of autocrats, I fear that the Trump Administration’s abandonment of such efforts will in fact fuel more misery and anti-Americanism.