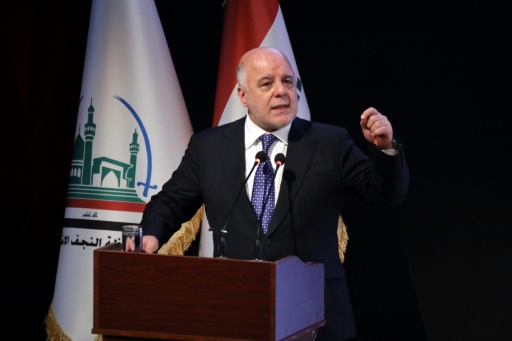 Ann Arbor (Informed Comment) – Iraqi caretaker prime minister Haidar al-Abadi on Monday walked back his pledge last week that Iraq would participate in the US sanctions regime imposed on Iran.

Al-Abadi now will only say that Iraq will not trade with Iran in dollars.

I suppose that the two could instead use Euros or Chinese Yuan for their bilateral trade, without that harming the volume of trade or detracting from its value.

Al-Abadi’s original boycott announcement had startled observers, given the close ties between the Shiite-dominated government in Baghdad and the Shiite clerical government of Iran. It seems unlikely that Iraq could have defeated ISIL in only 3 years had it not been for Iranian help. But most of all, several Iraqi Shiite political parties and militias are closely tied to Iran.

Iraq had elections, but there was a recount, which set back the formation of a new government. Al-Abadi and his party lost badly to Muqtada al-Sadr and his coalition, which includes Communists.

Likely, al-Abadi thinks that Trump can help him keep his job as prime minister, and hence al-Abadi’s willingness to throw Iran under the bus. Personally, I think al-Abadi may well not continue as prime minister. And after his announcement of sanctions on Iran, a lot of Shiite politicians will want to see him unseated.

The Shiite newspaper Sot al-Iraq (The Voice of Iraq) caled al-Abadi’s initial statement “a kiss of death” politically for him, however. So far in Iraq, parliament really has elected the prime minister, and it is hard to see how Trump (or Mattis) could just shoehorn al-Abadi in by fiat.

Iran is Iraq’s third largest trading partner, with Iranian goods accounting for 16% of Iraq’s imports in 2016. Iran is typically exporting some $6 bn. of goods to Iraq annually. The total value of the trade between the two countries during the past 12 months was about $13 bn.

Only Turkey and China are bigger trading partners for Iraq.

At the Iraq reconstruction conference held in Kuwait last February, the Trump Administration refused to offer Iraq any recover aid at all, which surely increased Iraqi dependence on Iran.

Iraq doesn’t need Iranian oil, so that part of US sanctions is irrelevant. But ordinary trade looks likely to continue, with US banks and the US dollar excluded.

My guess is that when the dust settles, Leader Khamenei of Iran will have a distinct advantage over Trump in Iraq, in part because of the soft power of shared Shiite Islam.