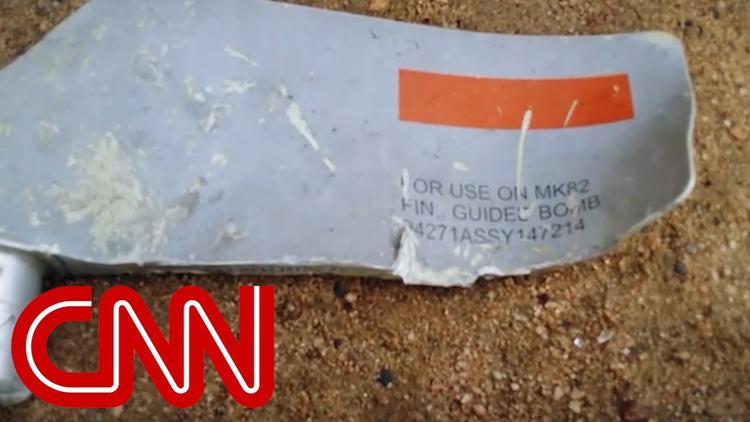 The Saudi and United Arab Emirates war on little Yemen, which was launched by Crown Prince Mohamed Bin Salman in March of 2015, has flown under the radar among the US public until recently.

Then on August 9, the Saudi-led air coalition struck Saadeh, the stronghold of the Helpers of God (Houthi) movement in north Yemen, killing over 51 people, including 40 children. They sent an enormous bomb down on a schoolbus setting out on a class field trip.

There are only a few possibilities for explaining this atrocity. One is that the Saudis and the Emiratis hate the Helpers of God movement so much and despise its homeland Saadeh so much, that they are targeting civilians there as part of a determination to wipe it out or cow it into submission. If so, the strike was a war crime, and resembles the current Israeli sniping policy against unarmed civilian protesters in Gaza.

Another possibility is that the strategic planners for the Saudi and UAE air forces are not very good at their jobs, or are deliberately disregarding the guidance of international law on avoiding civilians when targeting the enemy. In that case, they are pursuing the sort of policy in north Yemen that the Israeli air force pursues in its major Gaza actions– a simple disregard for the high possibility of killing civilians.

I’d like to stand against any attempt to blame all this on religious culture. The UAE leadership is secular-minded but technically Maliki Sunni. The Saudi royal family is Wahhabi, but probably only 40% of the Saudi population is, and Crown Prince Mohamed Bin Salman has moved to put the Wahhabi clerics and morals police in their place. They’ve hosted Shiite leaders like Muqatada al-Sadr of Iraq. They hate the Zaydi Shiite Helpers of God not primarily because they are Shiite but because they are populists who despise the Saudi royal family and have vowed to overthrow it in favor of a republic.

The forty dead children have turned out to be highly inconvenient for the Saudis and the Emiratis. They did their best to copy Israeli propaganda by charging that the Helpers of God are using children as human shields or even had conscripted the children as child soldiers (it was a civilian school field trip).

Elizabeth Warren and others in Congress brought sharply into question the US military’s aid to the Saadeh strike. The Pentagon has sold billions of high-powered weapons to the Saudis and the UAE, and Trump has sold them things that Obama would not. The Pentagon advises the Saudis on strategic targeting, sharing US satellite and other intelligence. The Pentagon refuels Saudi and Emirati planes in mid-flight.

The US Department of Defense is, in short, an unindicted co-conspirator in Saudi and UAE war crimes.

Then CNN looked into the matter, and not only was the bomb that hit the school bus supplied by the United States, but so too were the weapons deployed in other careless or vicious attacks by the Saudi coalition that left civilians dead.

And the Associated Press reported earlier this month that the Saudi-led coalition has made deals with al-Qaeda in Yemen, since both of them are fighting the Zaydi Shiite Helpers of God movement. AP stands by the reporting, based on loads of local interviews, despite denials by Riyadh and Abu Dhabi. Since the US is backing the coalition, Secretary of Defense Jim Mattis has been dragged by his allies into a de facto pact with al-Qaeda.

Yemen’s al-Qaeda is the most vicious and dangerous of the franchise. Whereas the al-Qaeda affiliate in Syria is heavily focused on Syria, Yemen’s al-Qaeda targeted the former Saudi minister of intelligence in Riyadh, and is responsible for the Christmas airplane bombing attempt over Detroit in 2009. Strengthening them in any way is a direct threat to Americans.

So what is going on in Yemen?

It is a diverse country of 27 million people. About a third of them, 9 million, are Zaydi Shiites and they predominate in the northwest of the country where the capital, Sanaa, is. Zaydis are not like Iranian Shiites– they are known to be somewhere between Sunnism and Shiism and tended to get along with Sunni neighbors.

Other Yemenis are tolerant Sufi Sunnis. Some, in the south, are secessionists (South Yemen was a Communist country 1967-1990, and many southerners want that back, minus the Communism).

But then there are harder line Muslim Brotherhood and Salafi types, Sunni fundamentalists.

In the 1990s, the Saudis made a big push to convert the Zaydis in Saadeh and elsewhere to Sunnism, using their oil billions. A section of the Zaydi leadership rebelled against the Yemeni government for allowing this missionary work (no doubt as a result of bribes). Saudi ambition pushed some mild Zaydis into militancy. After the president for life was overthrown in 2012, the Helpers of God initially were part of the constitutional crisis seeking to establish a new and more democratic government.

But the deposed president, Ali Abdullah Saleh, convinced them to help him come back to power by taking Sanaa in September of 2014. Army units loyal to Saleh joined the coup, and they gave the Helpers of God access to weapons depots full of US armaments. The Helpers of God became over-ambitious and tried to take over the whole country, marching down to the port of Aden, in part to stop it from being taken by the Saudis. They were nevertheless pushed out of Aden by summer of 2015, and since then have been bottled up in the country’s northwest (where, however, much of the population of the country lives).

The Saudis and the UAE have mostly pursued an air war against a guerrilla group, which helps explain why the the poor, weak Zaydis are still standing up to them.

Saudi propaganda paints the Zaydis as puppets of Iran. Iran has given them some help, but it is difficult to see how it could have given them very much, since the Houthis are surrounded by the Saudis. Most of their weapons are American, from Saleh’s depots (Saleh broke with them and they killed him).

The Helpers of God would exist as a movement if there were no Iran. It is an indigenous Zaydi movement (they don’t have ayatollahs e.g.) Iran is not in a position to direct them, though perhaps a few secret agents or Lebanese Hizbullah proxies have given them some advice. The Iran role is tiny compared to the American role in backing the Saudis and Emiratis.

The Zaydis appear to have rallied around the Helpers of God, since they’re able to get out big supportive crowds, and who could blame them if the alternative is the al-Qaeda extremist Salafism of the south with which the invaders have surreptitiously allied?

The Helpers of God made a huge error with their 2014 coup and alliance with Saleh. They have also been erratic and highly authoritarian, suppressing journalists and putting out conspiracy theories and crazily talking about going on to Riyadh. But the Saudis almost made a huge error with their 2015 decision to go to war. The Saudi-Emirates air war has turned Yemen, once known as Arabia Felix (Happy Arabia), into the world’s worst basket case, with a million cholera cases, hundreds of thousands displaced, ten thousand killed, 30,000 wounded, and millions in genuine danger of starvation.

I think a negotiated settlement is there to be had. The Zaydis are weak, and know it. The Saudi-led Coalition must surely be bleeding money and tired of the hard slogging and the damage to reputation.

If only there were a major superpower in the region that could negotiate between the two sides as an honest broker, as Jimmy Carter did between Egypt and Israel in 1978-79.

Instead, the US has been reduced to a butler for Mohamed Bin Salman, lapping up Saudi propaganda about an Iranian under every bed and politely suggesting where he might bomb (he often ignores the advice and hits hospitals, schools, bridges, etc.)

With Bolton as National Security Adviser, Pompeo at State, and Mattis at Defense– all of them certifiably insane when it comes to Iranophobia– there is however no prospect of the US backing away from its sinister role in the Arabian peninsula.

Prepare for more doleful headlines about dead Yemeni children, over the next two years.

CNN: “EXCLUSIVE: Bomb that killed 40 kids in Yemen made in US ”