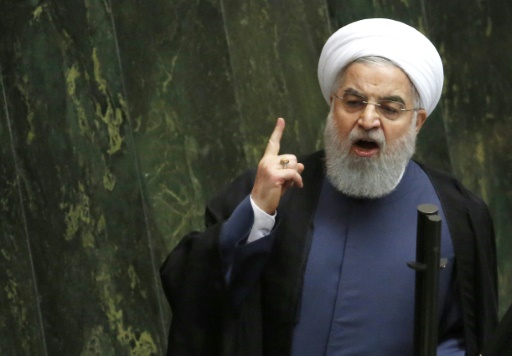 Tehran (AFP) – Iran’s parliament declared its dissatisfaction with President Hassan Rouhani on Tuesday, voting to reject his answers after grilling him over the deteriorating economy.

It was the first time Rouhani had been summoned by parliament in his five years in power, and MPs demanded answers on unemployment, rising prices and the sharp depreciation of the rial, which has lost more than half of its value since April.

The lawmakers, who have already impeached his labour and economy ministers this month, were unimpressed.

In votes at the end of the session, they expressed dissatisfaction with Rouhani’s responses to four of their five questions on the economy.

In the coming days, they will decide whether the government’s failures on these issues amount to a breach of legal obligations and should be referred to the judiciary.

The economy has been battered by the return of US sanctions following President Donald Trump’s decision to withdraw from the landmark nuclear deal between Iran and world powers.

Rouhani trod a difficult line, seeking to acknowledge the problems facing ordinary Iranians without admitting to a full-blown crisis.

“It should not be said we are facing a crisis. There is no crisis. If we say there is, it will become a problem for society and then a threat,” he told parliament.

– ‘Afraid of our disagreements’ –

As usual, Rouhani offered no concrete policy proposals, instead saying the answer lay in showing a united front. 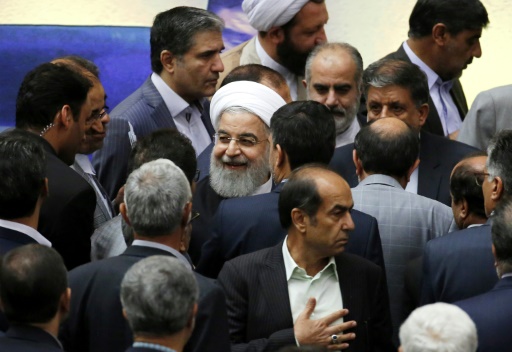 “You may talk about employment, foreign currency, recession, smuggling… I think the problem is in people’s view of the future,” he said.

“The people are not afraid of the United States, they are afraid of our disagreements. If the people see we are united, they will realise the problems will be resolved.”

But Rouhani’s government — which staked everything on its bid to attract foreign investment through a more “moderate” approach to relations with the West — has been badly weakened by the return of sanctions.

Most foreign firms have abandoned investment projects in Iran, and the next phase of renewed US sanctions in November will hit the crucial oil sector.

“We will not allow a bunch of anti-Iranians who have gathered in the White House to conspire against us,” Rouhani vowed. 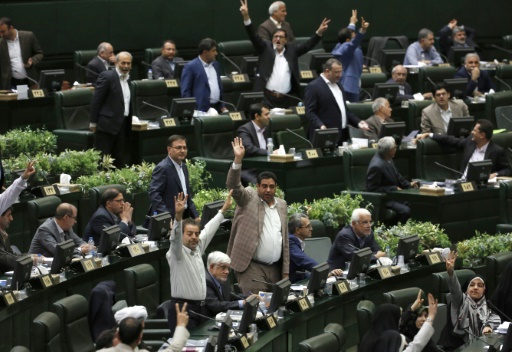 AFP / ATTA KENARE. Iranian lawmakers gesture during President Hassan Rouhani’s answers to the their questions in which he sought to shift the blame for the deteriorating economy to Washington even though most Iranians blame his government.

But most Iranians blame the government for failing to capitalise on the nuclear deal.

“You created a palace of wishes called the JCPOA,” said Mojtaba Zolnour, an MP for the religious centre of Qom, using the technical name for the nuclear deal.

“With one kick from Trump, this palace was demolished, and you didn’t have an alternative,” he said.

Despite the impeachment of two of his ministers, Rouhani himself is protected by supreme leader Ayatollah Ali Khamenei, who said recently that removing the president would “play into the hands of the enemy”.

That may explain the soft line taken by several speakers, with one conservative MP, Hossein Naghavi-Hosseini, emphasising: “We will stand by your government for the sake of protecting the system of the Islamic republic.”

But when it came to the votes, lawmakers accepted only one of Rouhani’s answers — related to international banking sanctions, which they agreed were beyond his government’s control.

Rouhani has even lost support among reformists who had backed him as the best option after their own leaders were either locked up or barred from standing for office.

Leading reformist Mostafa Tajzadeh, who has spent several years in jail for criticising the system, said Rouhani’s parliament appearance was a missed opportunity.

“By explaining the reasons for the country’s problems, Rouhani could have taken a big step towards increasing public awareness,” he wrote on Twitter.

“Parliament’s negative votes shows that failing to disclose the facts will only embolden our rivals and disappoint the people.”

The only previous time a president has been questioned was in 2012 when parliament summoned Rouhani’s controversial predecessor Mahmoud Ahmadinejad, whose erratic, populist style had alienated him from the establishment and further damaged Iran’s international standing.

It was after that session that MPs decided they should vote on the president’s answers, deputy speaker Ali Motahari explained to ISNA news agency this week, because Ahmadinejad’s responses were so “strange” and unconvincing.

Featured Photo: AFP / ATTA KENARE. Iran’s parliament has expressed dissatisfaction with President Hassan Rouhani’s answers to its questions over his handling of the deteriorating economy just two days after impeaching his economy minister.