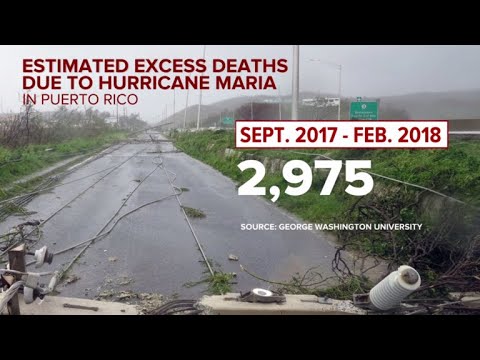 Ann Arbor (Informed Comment) – A team of researchers at George Washington University has estimated that excess deaths of Americans in Puerto Rico during and after last year’s Hurricane Maria reached almost 3,000, a number accepted by the governor.

In his visit to the island after the hurricane struck, Trump was insufferable. He said that the death toll was low compared to Katrina at New Orleans in 2005, which killed 1400. (The new estimates mean that Maria killed twice as many Americans. Puerto Ricans are American citizens.) He also castigated the victims for messing up the US budget.

In the end, the GOP Congress did nothing special in the way of aid appropriations for Puerto Rico. So luckily Trump wasn’t inconvenienced after all.

But the same GOP Congress found $1.5 trillion in tax cut giveaways to the billionaire class in February. Apparently slashing government revenue (which is equivalent to raising taxes for services on the non-billionaires) and embarrassing the budget that way is OK, as long as the super-rich are happy.

The intensity and longevity of Hurricane Maria was boosted by climate change. Putting billions of tons of carbon dioxide, a greenhouse gas, into the atmosphere every year causes the oceans to warm up. Hurricanes are caused by warm water, and the hotter the water the stronger and longer the storm. Increased water vapor in the air, associated with climate change, also causes the rains after landfall to be much heavier.

Americans experienced the al-Qaeda attacks on New York and Washington, DC, of September 11, 2001, as an act of war by a small guerrilla group of terrorists. The Bush administration parleyed public outrage into two major wars (Afghanistan and Iraq) and multiple small wars, all part of its “Global War on Terror” (GWOT). If you count the money we’ll spend over their lifetimes to care for wounded veterans of this war, it probably cost $6 trillion.

But the climate catastrophe of Maria was not greeted in the same way. First, the Washington DC elite announced the death toll as unrealistically low. Presumably because Puerto Ricans are Spanish-speaking Americans, their deaths did not preoccupy our newspapers of record day after day the way the 9/11 victims did.

The US government announced no new initiative at all to tackle the problem of global heating, caused by humans burning gasoline, coal and natural gas. Indeed, the president of the United States and most senators and congressmen from his party deny that humans are causing climate change.

It would be as though the Bush administration announced that al-Qaeda only killed a handful of people on 9/11, and then sat back and did nothing, arguing that al-Qaeda does not really exist and no one can be sure they caused the Twin Towers to collapse.

French Environment minister Nicolas Hulot resigned Tuesday, saying that the planet earth is becoming a sauna and biodiversity is evaporating and yet there is no sense of urgency in the French government.

If Mr. Hulot thinks the French political elite is sanguine about climate change, he should try talking to American Republicans.

Apparently we can see a large US territory flattened and nearly 3000 citizens killed, and yawn and pretend it did not happen or we don’t know why hurricanes are becoming more destructive.

We need a global war on climate change (GWCC). It turns out our elites vastly overestimated the importance of terrorism in the aftermath of 9/11, and put way more resources into combating it than can be justified by the actual danger (Americans are much more likely to die from falling in their bathtubs than from terrorism). In contrast, as our century wears on, the likelihood of them being killed or harmed by climate change is much greater.