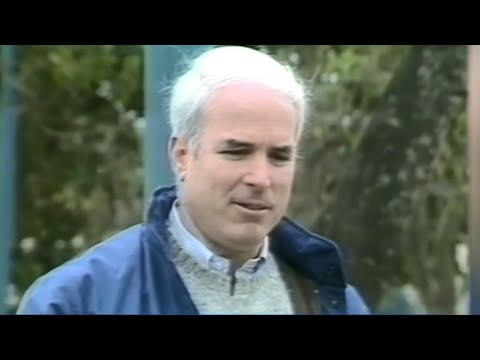 Ann Arbor (Informed Comment) – Racism is so pervasive in the United States, and white power elites work so hard to stigmatize minorities, that the dominant racists are even sometimes able to marginalize senior white males on grounds of their association with those minorities.

The head of the Republican Party will not mourn the passing of Senator John McCain. But such is the hypocrisy of politics that the W. Bush section of the GOP (now considered “moderate” and respectable despite its massive war crimes, its destruction of the US economy, its boosting of the super-rich at the expense of workers, and its deft use of the race dog whistle) will call John McCain a hero.

So how did McCain get to be Black? It was during 2000 Republican primary campaign.

George W. “Bush was running against Senator John McCain (R-AZ). McCain’s wife Cindy had visited an orphanage in Bangladesh and seen a little girl with a cleft palate who badly needed surgery. She and John adopted her and named her Bridget. Although Bridget was not raised Muslim, I think the McCains are particularly sensitive to anti-Muslim bigotry because of having a Bangladeshi in the family, and McCain refused to play the Islamophobia card in his campaign against Barack Obama in 2008.

“In 2000, the McCains campaigned in South Carolina with their children, including Bridget. So Bush’s mastermind, Karl Rove, came up with the idea of robo-calling voters and calling into talk radio, asking the question, “If you knew McCain had an illegitimate child with a Black woman, would that affect how you felt about him?” The Republican Party in South Carolina is solidly white, although the state is 1/3 African-American, and what they were pleased to call ‘miscegenation’ had been a crime in South Carolina until the late 1960s.

“Because people had seen Bridget at the rallies, Rove’s smear was widely believed, and it contributed to McCain’s loss in the GOP primary. Bush winning South Carolina cemented his standing as a front runner.

“No racism and bigotry, no Bush presidency. (McCain handily won South Carolina in 2008 when Rove was not calling the shots any more). Now you could say that Rove was behind all this and W. may not have backed it. But Bush never denounced Rove or dissociated himself from these tactics. The buck stops with him.”

McCain was of Scottish heritage and his father and grandfather were naval officers. He survived being a prisoner of war. He married the multi-millionaire heiress of the Hensley distributing company for Anheuser-Busch. He became senator for Arizona. You couldn’t get more white. And yet by contiguity, just having an adopted Bangladeshi daughter, McCain opened himself to loss of his white privilege.

In politics, it is never possible to get agreement across the board on someone’s record. Still, McCain’s refusal to engage in Muslim-baiting when he ran against Barack Obama in 2008 was a high point in American politics. But the way McCain himself was treated by Bush in 2000 was apparently a truer barometer of where American, and particularly GOP politics, has been going.