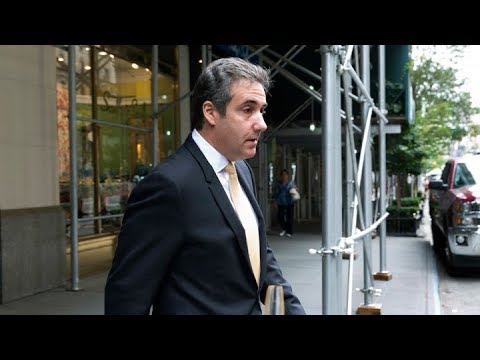 Ann Arbor (Informed Comment) – I can only imagine that some Jewish and other minority members of the Trump administration experience significant discomfort at being part of the promotion of white nationalist fascism with strong overtones of anti-Semitism or outright neo-Nazi hatred of Jews. We have seen that the most prominent African-American close to Trump, Omarosa Manigault-Newman, came to be disillusioned with this atmosphere of racism. In response to her charges, Trump called her “a dog,” thereby proving her point.

Michael Cohen, Trump’s personal attorney since 2006, grew up in Long Island. His mother, Sondra is a nurse, and his father, Dr. Maurice Cohen, is a surgeon. He survived the National Socialist genocide against Europe’s Jews, which left 6 million dead, and escaped from his native Poland.

The Wall Street Journal is reporting that Michael Cohen’s father, Maurice, strongly advised his son to dissociate himself from Trump. He allegedly said he didn’t survive the Holocaust to have his name sullied by Trump.

Michael Cohen himself had complained about the Trump family separation policy for those seeking asylum at the borders, in his letter resigning from the Republican National Committee, opining that children should never be used as a bargaining chip. He tweeted similar sentiments but then deleted the tweet.

The neo-Nazis who descended on Charlottesville last year this time chanted, “Jews will not replace us.” They inspired justifiable fear in the local synagogue.

Trump pointedly refused to condemn these neo-Nazis, calling them “very fine people.” It took him many days to mention the murder of Heather Heyer. His then White House chief strategist, fascist theorist Steve Bannon (who idolizes Mussolini) alleged that the “left” in Charlottesville was as violent as the right, which is patently untrue.

I wrote at the time:

“People don’t come to mere rallies with Klan torches and bats and shields and brickbats and even guns. The Unite the Right mob invasion of Charlottesville was not a political protest. It was intended as a Kristallnacht, as the breaking of the windows of the shops of the liberal Jews and Blacks who the ‘Alt-Right’ believes runs the small college town of Charlottesville…

Here is how Alan Zimmerman described the situation at his synagogue in Charlottesville on Saturday morning:

On Saturday morning, I stood outside our synagogue with the armed security guard we hired after the police department refused to provide us with an officer during morning services. (Even the police department’s limited promise of an observer near our building was not kept — and note, we did not ask for protection of our property, only our people as they worshipped).

Forty congregants were inside. Here’s what I witnessed during that time.

For half an hour, three men dressed in fatigues and armed with semi-automatic rifles stood across the street from the temple. Had they tried to enter, I don’t know what I could have done to stop them, but I couldn’t take my eyes off them, either. Perhaps the presence of our armed guard deterred them. Perhaps their presence was just a coincidence, and I’m paranoid. I don’t know.

Several times, parades of Nazis passed our building, shouting, “There’s the synagogue!” followed by chants of “Seig Heil” and other anti-Semitic language. Some carried flags with swastikas and other Nazi symbols.'”

Cohen’s attorney Lanny Davis has also alleged that Trump’s erratic behavior, especially at the Helsinki Summit with Russian president Vladimir Putin (in which Trump took Putin’s side against his own intelligence community), played a role in Cohen’s decision to come clean about his boss.

I don’t know how much credence to give the WSJ article. Michael Cohen does not come across from his own recordings and public statements as a person with a strong moral compass, or, indeed, with a moral compass at all. But it does seem obvious that he could have clammed up and refused to implicate Trump, like an organized-crime footsoldier who expects the Don to take care of him. Trump clearly expected that behavior from his underlings, and praised Paul Manafort for acting like an arrested mobster.

That Cohen in the end decided to come clean about Trump, and so to end any possibility of a presidential pardon, may be the result of a legal strategy, or it could just point to the sudden acquisition of a conscience. In the former (and possibly more likely) case, that Trump’s deleterious effect on the Cohen family name is being invoked is still a sign of dissatisfaction with his smelliness. And in the end, Trump’s fascism and obsequiousness to Putin may be the things that bring him down.