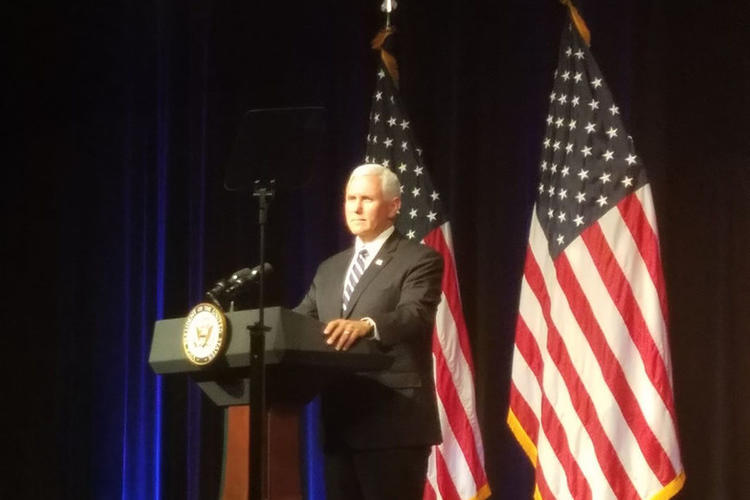 Trump and Pence want to spend $8 bn to establish a new branch of the US armed forces, the Space Force.

I have enormous respect of the US military. My father was a 20-year man. Two of my uncles served in WW II. We think an ancestor on the McIlwee side, spelling it Mucklewee, served in the Revolutionary War.

But, the US military was intended by the Founding Fathers to be an institution for self-defense. Most of them thought a standing army would kill democracy. Since the end of WWII just such a standing military has been set up and is now gobbling up over $700 bn a year. Actually, the true amount of military-related expenses is over $1 trillion a year. War-fighters are an ever shrinking part of this military.

And here’s the secret of the way the scam works. A good half of the Pentagon budget is given back out to military contractors. It is, in essence, corporate welfare on a huge scale. Officers who retire often form provision companies on getting out. They know what their former colleagues need and want, and their former colleagues will take the call when they make the offer. The retirees with their new companies take the profits.

Many of the former officers you see interviewed on CNN and other cable news shows are actually making money off wars even as the opine on them, and despite print press exposes, CNN et al. have never apologized for the practice, never identified biased guests, and never acknowledged it is happening.

The US military doesn’t need to be nearly so large if it is a defense force and if it were run like a public sector corporation (think Reneault) instead of as a way to enrich cronies. Nor does “defense” spending create many jobs, and the ones it creates are way more expensive to the public than most others.

The US military isn’t very good at counter-terrorism (see: Afghanistan), and where it is, it doesn’t need those sort of resources. ISIL was defeated by the Iraqi military, Shiite militias, the Iranian Revolutionary Guards with the support of 6,000 US special operations forces and lots of sorties by the US Air Force. That didn’t cost $700 bn. It cost the US $14.3 bn., and it was arguably the biggest active security threat to the US at the time.

The biggest challenge the United States faces is climate change, , and addressing that would actually save us money. Inventing more ways of scaring the public and throwing money to military contractors won’t save any money at all, and since there are no military threats in space, it can’t be a defense unit.

One who understood that the (mostly white Protestant US elite) will gladly spend trillions on war but won’t step up to put a social safety net under American workers was. Gil Scott-Heron:

Whitey on the moon – gil scott-heron

A rat done bit my sister Nell.
(with Whitey on the moon)
Her face and arms began to swell.
(and Whitey’s on the moon)

I wonder why he’s uppi’ me?
(’cause Whitey’s on the moon?)
I was already payin’ ‘im fifty a week.
(with Whitey on the moon)
Taxes takin’ my whole damn check,
Junkies makin’ me a nervous wreck,
The price of food is goin’ up,

An’ as if all that shit wasn’t enough
A rat done bit my sister Nell.
(with Whitey on the moon)
Her face an’ arm began to swell.
(but Whitey’s on the moon)

If anything proved Mr. Scott-Heron’s perspicacity, it is the emergence of the Space Force in the Trump era.

Trump is crashing the Affordable Health Care Act without putting anything in its place, so that millions of people will lose their health care insurance. For a while there, Nel could have gotten an affordable doctor visit for her rat bite. She wouldn’t have been uninsured. But Trump has just kicked Nel back off health insurance.

Trump’s tax scam (“cut”) also will balloon the Federal deficit and throw trillions in windfalls to some 300,000 Americans, leading to a steep reduction of government services and help for the families and children who are struggling.

And in that case, wherein Trump has managed to project his racism even into the vacuum of outer space, and given how he has cheapened and coarsened the lives of working Americans, I have no sympathy for this new piece of Trumpism.

How little progress we have made since the 1960s! Nel’s still being bitten by rats. And Whitey’s still planning to be on the moon, this time in a military uniform.