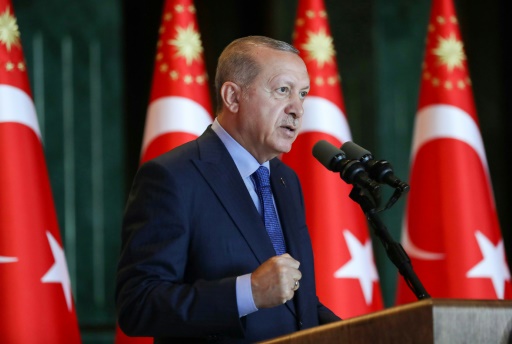 Istanbul (AFP) – President Recep Tayyip Erdogan on Tuesday said Turkey would boycott US electronic goods in retaliation for punitive sanctions by Washington against Ankara over the detention of an American pastor.

“We will boycott US electronic goods,” Erdogan said in a televised speech, raising the stakes in a spat that has seen the Turkish lira plunge to record lows.

“If (the United States) have the iPhone, there’s Samsung on the other side,” he said, referring to US giant Apple’s iconic phone and the top South Korean brand.

“We (also) have our Venus and Vestel,” he said about homegrown Turkish electronics brands.

Relations between the two NATO allies have plummeted in one of their worst crises in decades after the detention of US pastor Andrew Brunson on terror-related charges, sending the Turkish lira into free fall against the dollar.

Erdogan has been repeatedly photographed with Apple products including the iPhone and iPad.

He also made his now famous speech on the night of the July 2016 failed coup calling citizens out into the street through Facetime, an iPhone app.

The lira’s plunge — which had been ongoing for weeks — was turned into a rout on Friday when US President Donald Trump tweeted that Washington was doubling aluminium and steel tariffs for Turkey.

Turkish Airlines also announced on Twitter that it would join a campaign circulating on social media with a hashtag #ABDyeReklamVerme (don’t give ads to America).

“We, as the Turkish Airlines, stand by our state and our people. Necessary instructions on the issue have been issued to our agencies,” Yahya Ustun, spokesman for the country’s flag-carrier, wrote on Twitter.

Erdogan said Turkey was facing an “economic attack” and a “bigger, deeper operation” but showed no sign of making concessions to the United States.

Erdogan admitted the Turkish economy had problems — including a widening current account deficit and inflation of almost 16 percent but added: “Thanks to God, our economy is functioning like clockwork.”