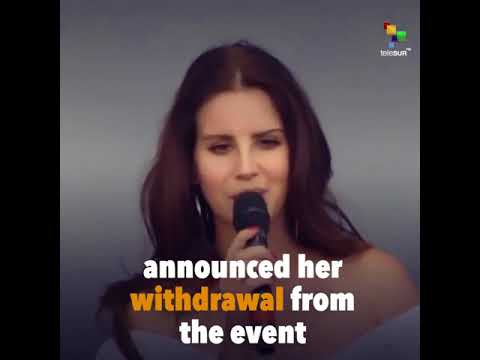 BETHLEHEM (Ma’an) — A wave of cancellations followed Lana Del Rey’s announcement about cancelling her performance at the Meteor Music Festival in northern Israel this weekend.

Following efforts by the Boycott, Divestment and Sanctions movement (BDS) and worldwide criticism, more than 15 music artists have cancelled their performances at the Meteor Festival in Israel, according to the Palestinian Campaign for the Academic and Cultural Boycott of Israel (PACBI).

The first cancellation, which was supposed to be the biggest act in the festival, was American singer and songwriter, Lana Del Rey, who tweeted “it’s important to me to perform in both Palestine and Israel and treat all my fans equally.”

Shlohmo posted on his Twitter “sorry for short notice but I will NOT be playing in Israel next week. Supporting the oppressed thru my absence is more important to me especially after the government’s recent human rights atrocities.”

An American indie pop band Of Montreal cancelled their performance through a post on their Facebook page, “we have decided to cancel our appearance at the Meteor festival. After exhausting all of the different possible ways of justifying playing an Israeli party festival, while the political and military leaders of the country continue their murderous and brutal policies against the Palestinian people, we came to the realization that there is no actual appropriate move other than to cancel the show.”

The most recent cancellation was announced by British singer and actress, Little Simz, who wrote “Palestinian and Israeli relations are far more complicated than I knew. I will not be appearing at Meteor Festival.”

Among the other famous names, which will not be part of the festival’s lineup are British DJ Shanti Celeste, British DJ and producer Leon Vynehall, as well as Swedish DJ Seinfeld and Australian DJ Mall Grab. Also, Turkish singer Selda, DJ Volvox, DJ Python, Black Motion and bands such as Khalas and Zenobia have pulled out of the event.

BDS as well as its supporters, including Roger Waters, had called upon many of the artists, including Lana Del Rey, to cancel their performance at the festival as an act of solidarity with the Palestinian people.

Roger Waters spoke about the matter during an interview with The Real News Network, stressing “if you remain neutral where injustice is occurring, you are siding with the oppressor.”

Waters added “remaining neutral is to side with the occupation and with the apartheid state. It just is. The right thing to do is to cancel.”

Despite all these cancellations, more than 130 performances will take place at Meteor Festival.

Performing in Israel still remains highly politicized, with many criticizing that Israel’s military action towards the Palestinians is more than enough to justify a cultural boycott.