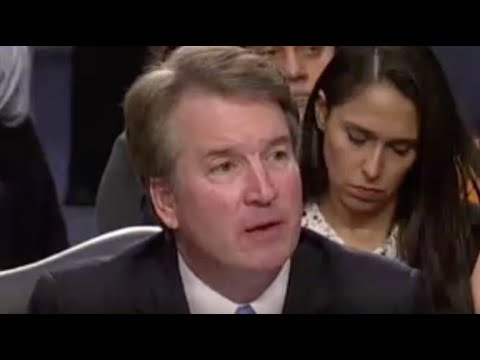 (Informed Comment) – Regardless of one’s evaluation of his overall performance, Judge Brett Kavanaugh merits an A for his ability to sidestep or evade questions on any controversial issue. I get the impression that he spent hours practicing non-answer answers to a familiar battery of anticipated questions. Whether these evasions will continue to work in the face of new and pointed accusations remains to be seen. One moment, however, did break the usual pattern.

Unfortunately this question has received less attention than it merits. Here is how Julia Conley, a staff writer for CommonDreams, describes the exchange: “Kavanaugh refused to say whether he agreed with Justice Ruth Bader Ginsburg’s straightforward statement, made at her 1993 confirmation hearing, that a woman should be treated as “a fully adult human responsible for her own choices,” citing the need to observe “judicial independence” numerous times when Sen. Kamala Harris (D-Calif.) attempted to extract an answer. Seeing that the line of questioning was leading nowhere, Harris moved on to a simpler inquiry.

“Can you think of any laws that give government the power to make decisions about the male body?” Harris asked.

Viewing the video I would agree that Kavanaugh did appear stumped, but I am tempted to say his was a pregnant pause in the proceedings. Men do not become pregnant, and in our society they are not asked to sacrifice their bodies. The very possibility is so far beyond the pale as to throw off even Kavanaugh’s well scripted performance. Inserting gender equality into the debate on reproductive rights might change that debate in fundamental ways.

I don’t believe human life begins at conception, but I have no iron-clad argument to convince an opponent. Nonetheless, if protection of innocent life is our motive, responsibility must be shared equally between men and women. In this society, denying women abortion imposes all the risks of sustaining innocent life on women.

The late Village Voice columnist Ellen Willis once advocated re-centering the abortion debate on equality of sacrifice. (See her book No More Nice Girls, “From Forced Pregnancy to Forced Surgery.) As far as I know that provocative piece did not spark much debate and comment. That is a shame.

Pregnant women must sacrifice their careers, comfort, health, and sometimes even lives to have a. baby. The stresses are only increasing. If my child, or any child, becomes gravely ill and needed my body, e.g., for bone marrow, liver, or kidney I might feel a moral obligation to surrender all or part of an organ, but government can’t compel me to accept the risks these procedures entail.

If there is an absolute obligation to sustain innocent lives, men need to accept dramatically increased risks and responsibilities. A detailed portrayal of the medical demands that might reasonably be made of men, especially as the frontiers of transplant and genetic medicine expand, could shake up the abortion debate. Some citizens might demand a draft for male kidneys, livers, and bone marrow. Organ donations upon death might be made a requirement for men rather than merely an option.

Other citizens within conventionally gendered families might still maintain the “natural” role of women as primarily responsible for the health of all life. Such an argument might be hard to sustain in a world where the possibility of motherhood and the process of having a baby are now so heavily medicalized. My suspicion, however, is that even some pro-life families would entertain the notion that if men will not sacrifice their health for sons or daughters, women should not be forced to bear such sacrifices alone.

Nonetheless, children are our future. Society must move beyond expanding “choice” for women to a more complete appreciation of the sacrifice involved in parenting. Many women face unrelenting physical, emotional, and economic distress. It is hard even to acknowledge let alone address any inner doubts about a cause to which one devotes so much of one’s life. It becomes all too easy to regard those who reject such roles as selfish or even evil. The sorry treatment of women as mothers does much to fuel the bitterness of the abortion debate.

Society must do more to expand the cultural and economic space for women in all modes of life—better family planning resources and sex education, parental leave policies for mothers and fathers, more free time for families and family emergencies, more opportunities for a voice in their children’s education, jobs that pay men and women equal and sustaining incomes. There is some reason to hope such an agenda might change abortion politics. Even some Catholic organizations are coming to the belief that economic justice for women and families would do more to reduce abortions than the harsh legal barriers.

The boundaries in the culture war are not fixed and impermeable. Progressives can expand opportunities for many families to live out their own values. Such a course may not convert all cultural conservatives to progressive causes and probably won’t sway Operation Rescue. Nonetheless, the foundation and the hope of democratic politics is that over time subtle transformations in moral and political vision will allow more of us to live together even as we continue to disagree on some core principles.