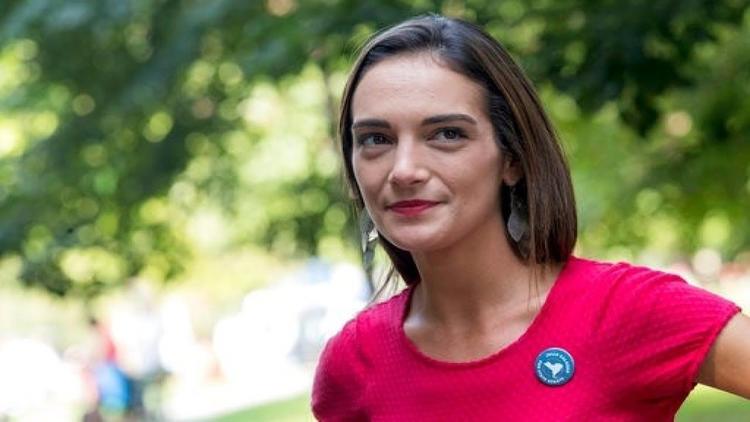 Julia Salazar, a member of the Democratic Socialists of America, has won the Democratic primary for state senator from Brooklyn and neighboring areas in New York, defeating a long-serving incumbent she claimed was in the back pocket of the realtors.

Coverage of her campaign, however, read like a salacious tabloid, and had a weird set of Middle East connections.

The right of center Tablet, oriented to Jewish affairs, raked her over the coals for her assertion that she is Jewish. She was raised Catholic but she says she converted while at Columbia University. The Tablet piece did not offer any proof that she did not convert. As an undergraduate she alleged that the Salazars had been Sephardic Jews, but that could well be true even if her family practiced Catholicism.

The Tablet piece was more concerned with her “trajectory.” She began by being pro-Israel and complaining about the Palestinians opposing their Nakba or calamity to the Shoah or Holocaust of the Jews. But a visit to the West Bank and being excluded at the Jordan border by Israeli authorities led her gradually to sympathize with the plight of the Palestinians

The Democratic Socialists of America as an organization favor BDS (Boycott, Disinvest and Sanction) on Israel for its Apartheid policies toward the Palestinians it keeps stateless). Her DSA membership is likely part of what made her assertions of Jewish identity controversial.

But it bears pointing out that Salazar’s “trajectory” is not uncommon even among American Jewish millennials raised in the faith. Dov Waxman points out:

“In a major survey of American Jews by the Pew Research Center in 2013, for instance, only a quarter of Jews aged 18 to 29 believed that Netanyahu’s government was “making a sincere effort to bring about a peace settlement with the Palestinians.”

We still live in a country where the imperial subjection of brown people and women is a powerful latent ideology that has taken over the podium at the White House. I have to say I was shocked when I realized how powerful a meme colonialism still is among supposedly liberal American elites.

Then the Daily Caller, a pro-Trump right wing outlet that skates right up to the boundaries of the Alt-Right, outed her against her will as one of the women who had accused David Keyes of sexual assault. Keyes was the international spokesman for far right Likud prime minister Binyamin Netanyahu. Salazar protested having been named by the Daily Caller, but in any case Keyes just took a “leave of absence” after numerous similar accusations surfaced from 11 women. The Daily Caller, in typical dastardly fashion, said it couldn’t find evidence that Salazar had filed a police report after the incident.

So Salazar got entangled in the #MeToo movement, and doubts were cast on her narrative because she, like many assaulted women, chose not to go to police and suffer through the trauma all over again. On current evidence, you’d have to take her word over that of Keyes, unless maybe you were a Likudnik male chauvinist pig.

Given how Netanyahu abuses and assaults the stateless Palestinians over which he rules as colonial viceroy, it should come as no surprise that his office has been dogged by a string of sexual harassment scandals (though not centering on the PM himself.)

All these negative experiences and media hit jobs had no effect on Salazar’s campaign, and given the district in which she won her primary, she is highly likely to be a New York state senator.

But what struck me is how differently she was treated by the corporate media than male politicians like Marco Rubio, Donald Trump and Binyamin Netanyahu himself.

Journalists don’t routinely bring up Rubio’s false claim that his family fled Communism (they came from Cuba in 1956 for business). The press doesn’t assume that Trump is guilty in the numerous sexual assault accusations that have been launched against him before he bought the silence of his accusers. Otherwise they would refer to him as the rapist president. But The Daily Caller wanted to know why Salazar hadn’t filed a police report against Keyes. It isn’t as if Trump has left a paper trail for most of his private life! And right of center news sites let Trump get away with dozens of whoppers every day, but obsessed about Salazar’s inconsistencies.

Netanyahu is under heavy duty police investigation for bribing and coercing the Israeli press and for other crimes of corruption. But he is written about with enthusiasm or at least measured respect in US newspapers. He boasted on camera of destroying the Oslo peace accords, but the New York Times still manages to blame the Palestinians for that one.

Salazar deserves to have her politics reported on, not just her personal life. But it is true that they seem to have overlapped in some ways. We can now flesh out the Tablet article about her “trajectory” by taking into account how she was allegedly mauled by a member of the staff of the prime minister of Israel, which along with her experiences on the ground in Palestine could help account for the way she cooled to mainstream Zionist propaganda.

That a member of DSA, with its stance on BDS, could get elected to the state senate in New York is a huge deal.

While Salazar’s colleague, Cynthia Nixon, lost her bid to be the Democratic standard bearer in the New York governor race, she got 100,000 more votes than had her opponent, Andrew Cuomo, received the last time he ran for office. It is just that turnout was enormous and so Cuoma easily won.