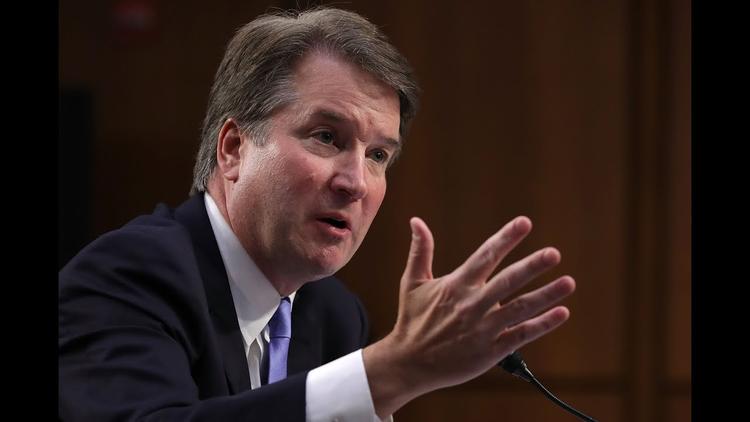 Ann Arbor (Informed Comment) – Christine Blasey Ford, a professor of Psychiatry at Palo Alto University and an affiliate at Stanford University, gave a harrowing interview in the Washington Post Sunday accusing a young, drunk Brett Kavanaugh of having attempted to rape her. He tore, she alleges, at the bathing suit she was wearing under her clothes. When she tried to scream, he put his hand over her mouth. She was beset with claustrophobia and could not breathe. He was drunk, out of control. Would he kill her without meaning to? You can relive her panic, her terror, her trauma in her words. And you wonder what it did to her, ever after.

Kavanaugh denies the charges. If he was blind drunk, you have to wonder whether he genuinely does not remember what he did. Although I believe Blasey, I should acknowledge that we only have an allegation against Kavanaugh, and no proof so far.

She writes under Blasey, so that is what I will call her. Blasey has a great deal of credibility. She told her therapist about the incident in 2012, as well as her husband, and named Kavanaugh to the latter. She has passed a polygraph test. She is being vilified by the right wing noise machine, of course, and says she came forward so late in the game because she just didn’t want the extreme hassle of playing this role– but was persuaded by the imminence of the Republican GOP’s anointment of him this coming Thursday (which may still happen).

I have no idea whether her accusation will derail the Kavanaugh nomination, though certainly the Republicans will put him through if they possibly can, because they know he will help destroy what is left of workers’ unions, will protect Capital from all challenges of social justice, will uphold the stupid precept that money is speech (and so only the rich really have the right to speak and shape politics), and will make the Evangelical and conservative Catholic wings of the GOP happy by finally overturning Roe v. Wade and returning us to the Coathanger Epoch, in which tens of thousands of women died annually from botched abortions.

I just wanted to share my horror at the ordeal that the teenaged Professor Blasey was put through and at the further gauntlet she must now run through the berating bully boys of the latently fascist, patriarchal Right.

And, I wanted to reveal that I looked for some of her articles on psychiatry, and found one, the abstract of which brought tears to my eyes in light of her Sunday op-ed.

The article looks at trauma in children, including “emotional, physical and sexual abuse,” and the way it leads to depression (Major Depressive Disorder or MDD). And the question here was whether boys and girls process all this differently, or there is a difference between the sexes with regard to how likely they are to fall victim to major depression as a result of being abused.

The article was published in 2011, just a year before she told her therapist about the Kavanaugh rape attempt. I don’t want to pry, but it seems to me pretty obvious that her interest in the subject of this article is autobiographical. She says she determined to brush off the attempted assault, but it clearly left a deep mark.

This is the abstract:

“Although considerable evidence demonstrates that adults who report childhood maltreatment are at increased risk of depression in adulthood, little is known about whether gender moderates risk. In a sample of 5,673 adult Health Maintenance Organization (HMO) patients, the authors employed the Patient Health Questionnaire-8 (PHQ-8) to assess major depressive disorder (MDD) and the Childhood Trauma Questionnaire (CTQ) to assess five different types of childhood maltreatment: emotional, physical, and sexual abuse, as well as emotional and physical neglect. Logistic regression models tested the main and interactive effects of gender and childhood maltreatment. Consistent with previous studies, men and women with histories of each type of childhood adversity were significantly more likely to meet criteria for MDD. However, the authors found no evidence that gender moderates the risk of depression. These findings suggest that men and women reporting history of childhood maltreatment are equally likely to suffer major depression in adulthood.”

As a psychiatrist, Professor Blasey has shown a special interest in ways of treating depression. And she is interested in helping veterans get over Post-Traumatic Stress Syndrome, which she and her co-authors define as “intrusive thoughts, hyperarousal, avoidance, and negative mood and thoughts, in response to an experienced or directly or indirectly observed traumatic event.”

Her most recent co-authored piece argues that Yoga may be a superior therapy for veterans suffering from PTSD, finding in a small uncontrolled sample that it reduced PTSD symptoms but did not appear to affect perceived stress. The abstract says

“Self-reported PTSD symptoms significantly reduced while perceived stress did not. Lower baseline set-shifting predicted greater improvements in PTSD between baseline and 4 weeks; early improvements in set-shifting predicted overall reduction in PTSD. Greater psychological flexibility was associated with lower PTSD and perceived stress; more yoga practice, before and during the study, was associated with greater psychological flexibility. Other predictors were not supported.”

So this great and selfless woman has dedicated her life to helping people (including veterans) who have been abused and traumatized to deal with the resulting symptoms. She took her own horrible experience with spoiled DC elite males and turned it into lemonade for others. And now, at immense personal cost, she has stepped forward to attempt to save us all from a severe trauma.

If the GOP shoehorns Kavanaugh in (even though we are on the cusp of an election and they sidelined Merrick Garland on exactly these grounds) then all Americans will be raped by the elitist political philosophy of Kavanaugh, and half of Americans will lose autonomy over their own bodies to a Federal government in thrall to a religious minority (Evangelicals are now only about 17% of Americans, and anti-abortion Catholics are maybe 12%). Workers will lose the few rights they have left. The US will revert completely to the Robber Baron age of the late nineteenth century, and America will be about as favorable to women’s rights as Mauritania, the Philippines and Honduras.

So apparently we all need to take up yoga.