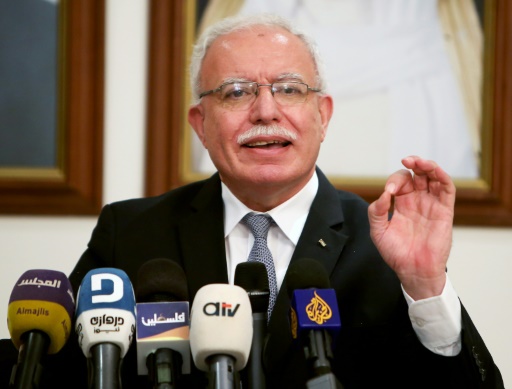 Jerusalem (AFP) – Palestinian foreign minister Riyad al-Maliki said Saturday the Palestinians have petitioned the UN’s top court, alleging that the US inauguration of an embassy in Jerusalem was illegal.

The Palestinians have filed a lawsuit at the International Court of Justice (ICJ) “for violating international law by moving its embassy in Israel to the occupied city of Jerusalem”, he said, quoted by the official Palestinian news agency WAFA.

In December, US President Donald Trump recognised Jerusalem as the capital of Israel, despite Palestinian claims on part of the city and breaking with longstanding US policy.

Palestinians have since refused all contact with the Trump administration.

The US embassy was transferred from Tel Aviv to Jerusalem on May 14, a day marked by mass protest in the Gaza Strip, where about 60 Palestinian protesters were killed by Israeli fire in border clashes.

Israel occupied east Jerusalem along with the West Bank in the 1967 Six-Day War and later declared the entire city its united capital.

Palestinians claim the predominantly Arab eastern area as the capital of a future Palestinian state.

UN resolutions call on countries to refrain from moving their embassies to the city until its status is resolved in an Israeli-Palestinian deal.

“The ICJ was asked to declare that moving the embassy to occupied Jerusalem constituted a violation of the Vienna Convention on Diplomatic Relations,” WAFA wrote in English.

The court said the Palestinian suit, filed on Friday, called on the body “to order the United States of America to withdraw the diplomatic mission from the Holy City of Jerusalem and to conform to the international obligations flowing from the Vienna Convention”.

An official of the Palestine Liberation Organisation (PLO) said it was the first time Palestinians had petitioned the court against the United States.

In November 2012, the UN General Assembly recognised the Palestinian Authority as a “non-member observer state”.

This allowed the Palestinians to join UN bodies such as the ICJ and also the International Criminal Court (ICC), which is a separate institution.

Previously, the Palestinians had asked the UN General Assembly to seek a ruling on their behalf over Israel’s West Bank separation barrier.

In 2004, the court issued a non-binding ruling that the network of walls and fences was illegal and called for sections to be dismantled.

Israel said it had no intention of complying.

The ICC was set up in 2002 with jurisdiction to investigate and prosecute the world’s worst crimes including genocide, war crimes and crimes against humanity.

Neither the United States nor Israel are signatories to the ICC.

Earlier this month, Palestinian official Saeb Erekat said the Palestinians had filed a petition there against Israel over its pending demolition of the Palestinian Bedouin village of Khan al-Ahmar in the occupied West Bank.

They have previously filed suit to the ICC claiming Israeli war crimes in the West Bank, Gaza Strip and east Jerusalem.

Featured Photo: AFP/File / Yasser Al-Zayyat. Palestinian foreign minister Riyad al-Maliki (pictured June 2018) said that Palestinians have filed a lawsuit against the United States at the International Court of Justice for moving its embassy in Israel to Jerusalem.