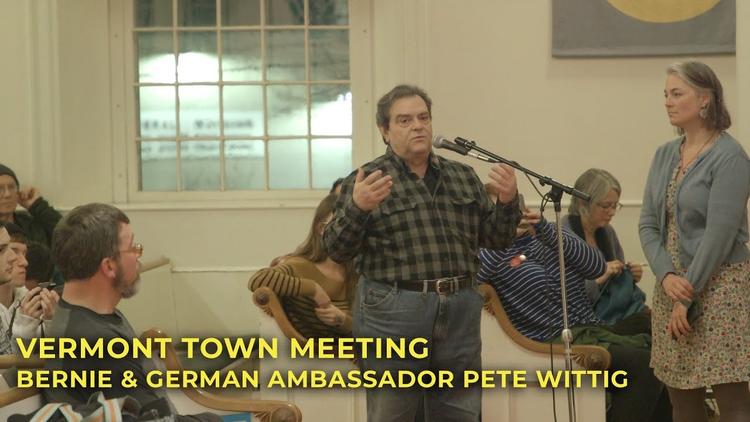 Via OpenDemocracy.net Calling on progressives worldwide to form an international movement to combat the rise of authoritarianism represented by Donald Trump.

Senator Bernie Sanders, the former US presidential candidate, and Yanis Varoufakis, co-founder of DiEM25, are today calling on progressives worldwide to form an international movement to combat the rise of authoritarianism represented by Donald Trump.

In the first of a series of exchanges published in The Guardian, the pair described the urgent need for a ‘Progressive International’ that can bring together people across the globe around a vision of shared prosperity, security and dignity for all.

“While the very rich get much richer, people all over the globe are working longer hours for stagnating wages, and fear for their children’s future,” said Sanders. “Authoritarians exploit these economic anxieties, creating scapegoats which pit one group against another.”

Varoufakis said: “Our era will be remembered for the triumphant march of a Nationalist International that sprang out of the cesspool of financialised capitalism. Whether it will also be remembered for a successful humanist challenge to this menace depends on the willingness of progressives in the US, the EU, the UK as well as countries like Mexico, India and South Africa, to forge a coherent Progressive International.”

As a first step, Varoufakis called for the creation of a common council that draws out a blueprint for an International New Deal, a “progressive New Bretton Woods”.

“Yanis Varoufakis is exactly right,” Sanders underscored in his reply. “At a time of massive global wealth and income inequality, oligarchy, rising authoritarianism and militarism, we need a progressive international movement to counter these threats.”

Sanders went on to argue that, “the solution, as Varoufakis points out, is an international progressive agenda that brings working people together around a vision of shared prosperity, security and dignity for all people. The fate of the world is at stake. Let us go forward together now!”

At DiEM25 we have been working hard since 2016 to make our stand as the first pan-European grassroots movement, powered and funded by people like you. We have brought together tens of thousands of people around a humanist, progressive agenda that can take the fight to the failing Establishment and repair and rebuild our common European project. Earlier this year, we began assembling European Spring, a coalition of progressive political parties from across the continent to compete in the May 2019 European elections and stage a citizen take-over of the EU.

And now, we are playing a key role in bringing together the global progressive alliance that Varoufakis and Sanders are calling for and that is so desperately needed to counter the rise of the hard right. We invite all like-minded political forces in every corner of Europe and beyond to join in!

Together we must send an unmistakable message that the way to beat the Nationalist International agenda of the likes of Donald Trump, Viktor Orbán, Matteo Salvini and the other xenophobes around the world is by running on progressive policies and electing candidates who will represent all of us – as Bernie Sanders says, “on every continent and in every country”.

Ours is a struggle not just about human rights, care for our global environment, social justice and progressive values, but also about survival. Our struggle is about combating the rise of the toxic ideologies and horrors we faced less than a century ago. And it is a struggle we can win — together.

Luis Martín is a political scientist and journalist. He writes about International Relations, Economics and the Eurozone. He is currently Communications Coordinator of the Democracy in Europe Movement 2025 (DiEM25).