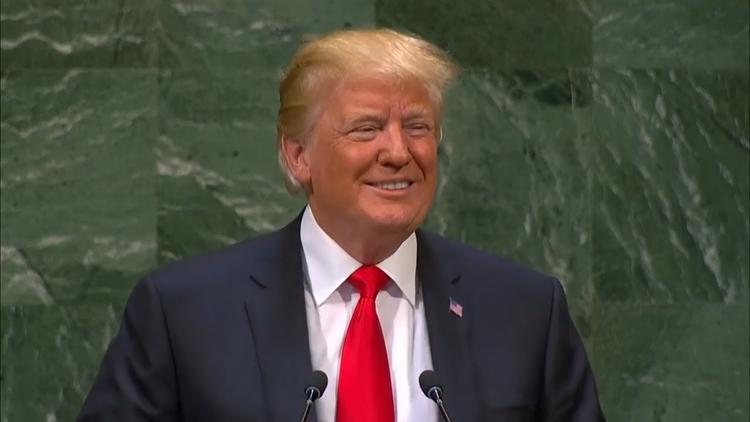 Ann Arbor (Informed Comment) – The US media, as I predicted, has gone a long way toward normalizing Trump. Despite counts of his over 5,000 ridiculous lies that show a vast increase over time, CNN, MSNBC and other news outlets respectfully report on him as though he really were a president who really did have policy positions. They actually paid his cronies to hold forth on his virtues and masquerade it as news.

The hypocrisy and bad faith of these networks, who have made billions off Trump in one way or another, should make us all puke.

And the United Nations General Assembly, like the little boy who pointed out that the king has no clothes, demonstrated what this disgusting spectacle looks like to normal people.

News anchors should rebel, forget their bosses’ instuctions (their bosses are destroying America by downplaying the climate crisis, the inequality crisis, the health crisis, the Forever Wars etc.). And they should just bellow out a full-throated laugh every time they read out what Trump has said. Roll around on the floor. Pound the floor with their shoes.

And not a nice laugh, a laugh “along with.” We should be laughing at the big orange buffoon as a put down of the very stable genius.

If the anchors won’t laugh at him they way he deserves, we should turn them off. That is right. One way to get rid of Trump is to refuse to watch reports about him. But when you do watch, remember to giggle maliciously.

It won’t repair the vast environmental damage being inflicted on this land, or restore any kidnapped children to their parents, or stop the great Train Robbery that is GOP tax policy, or get workers a living wage and the right to organize.

But it is the right thing to do. And believe me it will be extremely satisfying.

Moreover, if they don’t do it, they are creating a facade of respectability for Fascism and making themselves into Weimar dupes and fuck-ups.