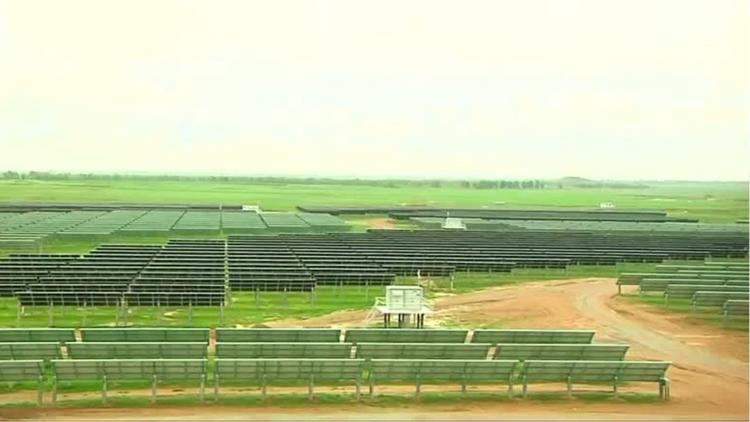 (Informed Comment) – President Donald Trump’s 30% tariff on Chinese-made solar panels turns out not to have had as severe an impact on the industry as had been feared. Trump was attempting to slow renewables growth in favor of Big Carbon–natural gas and coal, but he failed spectacularly.

As it turns out, the Chinese are so angry about his tariffs that they have slapped a 10% tariff on US liquid natural gas (LNG). The US now has a good deal of natural gas, which is exported by sea in the form of LNG in canisters on containment ships, because of hydraulic fracturing or fracking. The LNG companies in the US were expecting their primary customer to be China, which is trying to move away from coal to renewables and cleaner-burning natural gas. But the US frackers are in competition with Qatar and the Russian Federation, and it now seems likely that those two will be the ones who dominate the vast and growing China market.

Further, growth in solar was outpacing the laying of electricity lines to get the new energy to market. So in some instances you had solar farms with no way to inject the electricity into the grid as yet (the grid is being expanded with high capacity lines).

This summer, China announced a reduction of subsidies for solar, in order to cool down what Beijing saw as an overly exuberant market. The reduction of subsidies for the Chinese domestic market caused some projects to be cancelled or postponed because they were not more expensive, and left the manufacturers with a lot of panels they now needed to sell oversees, at a discount. That is, the supply abroad was artificial increased. Greater supply of a commodity, assuming demand remains stable, results in a fall in cost.

This development– the lowering of subsidies for Chinese solar panels in the domestic market– had nothing to do with Trump.

But that there were so many inexpensive Chinese solar panels available for import into the US turned out to pretty much offset Trump’s 33% tariff on the panels.

Other reasons solar energy is falling in price include the scale of many projects (huge), as well as cheaper and better batteries for storage.

Even before the bargain sale on Chinese panels, the US solar sector was doing all right, putting in 4.7 gigawatts of new capacity (a third of all new electricity-generation capacity in the US, even if there was a decline in new installations year on year).

But with the price fall this summer, some big projects that had been shelved are being touted again in the US.

The US pace of installation for solar panels slowed in the first half of 2018, but is expected to pick back up smartly the rest of this year.

And even though China wants to slow down, it put in 24.3 gigawatts of solar in the first half of this year. China now has 154.51 gigawatts of solar, making it the world leader. It has a third of all the installed solar capacity in the world.

To add insult to injury for Trump, California has announced it is going to 100% renewable electricity by 2045, and Sacramento is exploring ways of cooperating with China on green energy. As Nathanael Johnson notes at Grist/ Mother Jones, Trump thinks climate change is a Chinese disinformation campaign. And we know what he thinks of blue state California. For the two to get together is very good for the world, but it is Trump’s worst nightmare.
—-