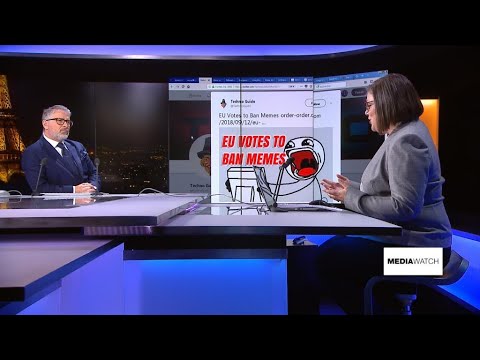 ( Electronic Frontier Foundation) – Today, in a vote that split almost every major EU party, Members of the European Parliament adopted every terrible proposal in the new Copyright Directive and rejected every good one, setting the stage for mass, automated surveillance and arbitrary censorship of the internet: text messages like tweets and Facebook updates; photos; videos; audio; software code — any and all media that can be copyrighted.

Three proposals passed the European Parliament, each of them catastrophic for free expression, privacy, and the arts:

1. Article 13: the Copyright Filters. All but the smallest platforms will have to defensively adopt copyright filters that examine everything you post and censor anything judged to be a copyright infringement.

2. Article 11: Linking to the news using more than one word from the article is prohibited unless you’re using a service that bought a license from the news site you want to link to. News sites can charge anything they want for the right to quote them or refuse to sell altogether, effectively giving them the right to choose who can criticise them. Member states are permitted, but not required, to create exceptions and limitations to reduce the harm done by this new right.

At the same time, the EU rejected even the most modest proposals to make copyright suited to the twenty-first century:

1. No “freedom of panorama.” When we take photos or videos in public spaces, we’re apt to incidentally capture copyrighted works: from stock art in ads on the sides of buses to t-shirts worn by protestors, to building facades claimed by architects as their copyright. The EU rejected a proposal that would make it legal Europe-wide to photograph street scenes without worrying about infringing the copyright of objects in the background.

2. No “user-generated content” exemption, which would have made EU states carve out an exception to copyright for using excerpts from works for “criticism, review, illustration, caricature, parody or pastiche.”

I’ve spent much of the summer talking to people who are delighted with this outcome, trying to figure out why they think this could possibly be good for them. Here’s what I’ve discovered:

The entertainment industry has convinced creators that there is a technology out there that can identify copyrighted works and prevent them from being shown without a proper license and that the only thing holding us back is the stubbornness of the platforms.

The reality is that filters primarily stop legitimate users (including creators) from doing legitimate things, while actual infringers find them relatively easy to get around.

Put it this way: if your occupation is figuring out how filters work and tinkering with getting around them, you can become skilled in the art. The filters used by the Chinese government to block images, for example, can be defeated by simple measures. Meanwhile, these filters that are bound to be thousands of times more effective than any copyright filter because they’re doing a much more modest job with far more money and technical talent on hand.

But if you’re a professional photographer, or just a regular person posting your own work, there’s no time in your life to become a hardcore filter-warrior. When a filter mistakes your work for copyright infringement, you can’t just bypass the filter with a trick from the copyright infringing underground: you have to send an appeal to the platform that blocked you, getting in line behind millions of other poor suckers in the same situation as you. Cross your fingers and hope that the overworked human reviewing the appeals decides that you’re in the right.

Of course, the big entertainment and news companies aren’t worried about this outcome: they have backchannels direct into the platforms, priority access to help-lines that will unstick their content when it gets stuck in a filter. Creators who align themselves with large entertainment corporations will be shielded from filters — while independents (and the public) will have to fend for themselves.

* They grossly underestimate the importance of competition for improving their lot in life.

The mandate to filter the Internet puts a floor on how small the pieces can be when antitrust regulators want to break up the big platforms: only the largest companies can afford to police the whole net for infringement, so the largest companies can’t be made much smaller. The latest version of the Directive has exemptions for smaller companies, but they will have to stay small or constantly anticipate the day that they will have to take the leap to being copyright police. Today, the EU voted to increase the consolidation in the tech sector, and to make it vastly more difficult to function as an independent creator. We’re seeing two major industries, both with competitiveness problems, negotiate for a deal that works for them, but will decrease competition for the independent creator caught in the middle. What we needed were solutions to tackle the consolidation of both the tech and the creative industries: instead we got a compromise that works for them, but shuts out everyone else.

How did this terrible state of affairs come to pass?

It’s not hard to understand, alas. The Internet has become a part of everything we do, and so every problem we have has some intersection with the Internet. For people who don’t understand technology very well, there’s a natural way to solve those problems: “fix the technology.”

Arthur C Clarke famously said that “Any sufficiently advanced technology is indistinguishable from magic.” Some technological accomplishments do seem like magic, and it’s natural to witness these workaday miracles and assume that tech can do anything.

An inability to understand what tech can and can’t do is the source of endless mischief: from the people who blithely assert that networked voting machines can be made secure enough to run a national election; to the officials who insist that we can make cryptography that stops crooks from breaking into our data, but allows the police to break into crooks’ data; to the hand-waving insistence that a post-Brexit Irish border can be “solved” with some undefined technical fix.

Once a few powerful entertainment industry figures were persuaded that filtering at scale was possible and consequence-free, it became an article of faith, and when technologists (including a who’s who of the world’s top experts on the subject) say it’s not possible, they’re accused of mulish stubbornness and lack of vision, not a well-informed perspective on what is and isn’t possible.

That’s a familiar-enough pattern, but in the case of the EU’s Copyright Directive, there were exacerbating factors. Tying a proposal for copyright filters to a proposal to transfer a few million euros from tech giants to newspaper proprietors guaranteed favorable coverage from the very press looking for a solution to its problems.

Finally, there’s the problem that the Internet promotes a kind of tunnel vision in which we assume that the part of the net we interact with is the whole thing. The Internet handles trillions of articles of public communication every day: birthday wishes and messages of condolences, notices of upcoming parties and meetings, political campaigns and love notes. A tiny, sub-one-percent slice of those communications are the kind of copyright infringement that Article 13 seeks to address, but the advocates for Article 13 keep insisting that the “primary purpose” of the platforms is to convey copyrighted works of entertainment.

The Internet is more vast than any of us can know, but that doesn’t mean we should be indifferent to all the other Internet users and the things they lose when we pursue our own narrow goals at the expense of the wider electronic world.

Today’s Copyright Directive vote not only makes life harder for creators, handing a larger share of their incomes to Big Content and Big Tech — it makes life harder for all of us. Yesterday, a policy specialist for a creator’s union that I’m a member of told me that their job isn’t to “protect people who want to quote Shakespeare” (who might be thwarted by bogus registration of his works in the copyright filters) — it was to protect the interests of the photographers in the union whose work is being “ripped off.” Not only did my union’s support of this catastrophic proposal do no good for photographers — it will also do enormous damage to anyone whose communications are caught in the crossfire. An error rate of even one percent will still mean tens of millions of acts of arbitrary censorship, every day.

So what is to be done?

Practically speaking, there are several more junctures where Europeans can influence their elected leaders on this issue.

* Immediately: the Directive will now go into “trilogues” — secretive, closed-door meetings between representatives from national governments and the European Union; these will be hard to influence, but they will determine the final language put before the Parliament for the next vote (Difficulty: 10/10)

* Next spring: The European Parliament will vote on the language that comes out of the trilogues. It’s unlikely that they’ll be able to revise the text any further, so this will probably come to a vote on whether to pass the Directive itself. It’s very difficult to defeat the Directive at this stage. = (Difficulty: 8/10)

* After that: 28 member states will have to debate and enact their own versions of the legislation. In many ways, it’s going to be harder to influence 28 individual parliaments than it was to fix this at the EU level, but on the other hand, the parliamentarians in member states will be more responsive to individual Internet users, and victories in one country can be leveraged for others (“See, they got it right in Luxembourg, let’s do the same”) (Difficulty: 7/10)

* Somewhere around there: Court challenges. Given the far-reaching nature of these proposals, the vested interests involved, and the unresolved questions about how to balance all the rights implicated, we can expect this to rise — eventually — to the European Court of Justice. Unfortunately, court challenges are slow and expensive. (Difficulty: 7/10)

In the meantime, there are upcoming EU elections, in which EU politicians will have to fight for their jobs. There aren’t many places where a prospective Member of the European Parliament can win an election by boasting about expansions of copyright, but there are lots of potential electoral opponents who will be too happy to campaign on “Vote for me, my opponent just broke the Internet.”

As we’ve seen with Net Neutrality in the USA, the movement to protect the free and open Internet has widespread popular support and can turn into a potential third rail for politicians.

Look, this was never going to be a fight we “won” once and for all — the fight to keep the Internet free, fair and open is ongoing. For so long as people have:

b) intersect with the Internet;

there will always be calls to break the Internet to solve them.

We suffered a crushing setback today, but it doesn’t change the mission. To fight, and fight, and fight, to keep the Internet open and free and fair, to preserve it as a place where we can organise to fight the other fights that matter, about inequality and antitrust, race and gender, speech and democratic legitimacy.

If this vote had gone the other way, we’d still be fighting today. And tomorrow. And the day after.

The fight to preserve and restore the free, fair and open Internet is a fight you commit yourself to, not a fight that you win. The stakes are too high to do otherwise.

Cory Doctorow is an activist, author of a string of science fiction novels treating government surveillance and attempts to circumscribe free speech on the internet, and co-editor of the blog Boing Boing. He is also a special advisor to the Electronic Frontier Foundation.