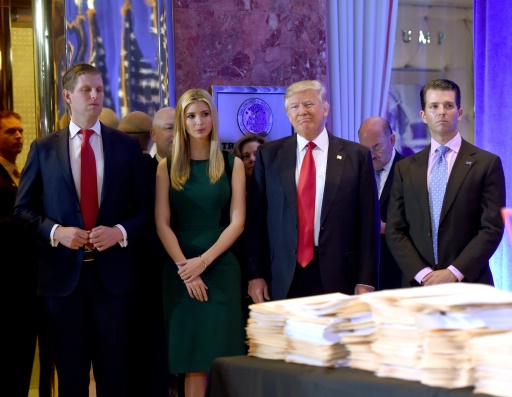 The four complainants, whose names were anonymized, asked the federal court in Manhattan to grant a class action lawsuit so others can join the complaint.

They accuse Trump and his Trump Organization of having promoted to investors telecommunications marketing firm ACN, claiming it had sizable revenue that never materialized, according to the filing.

The plaintiffs invested in ACN after watching promotional videos featuring Trump, triggering significant expenses without ever reaping promised profits from their investments.

They described themselves as “working-class Americans,” saying thousands more like them were defrauded by Trump.

One was said to be a California hospice caregiver, another a Maryland food deliver driver, another is self-employed and previously worked for the Salvation Army charitable group.

“The Trumps conned each of these victims into giving up hundreds or thousands of dollars — losses that many experienced as devastating and life altering,” read the complaint.

Relying on vendors who work from home, ACN is an intermediary for direct-sell telecommunication services such as phone and internet service.

Even if Trump insisted he was not promoting ACN to make money, he received secret payments worth millions of dollars for his services between 2005 and 2015 from that company, the Trump Network vitamin marketing enterprise and the Trump Institute training seminars, according to the complaint.

The Trump organization did not immediately respond to requests for comment.

ACN indicated that Trump was a paid ambassador of sorts for the brand from 2006 until he announced his presidential candidacy in 2015.

The company defended its business model, which it claimed employs 18.6 million people in the United States and generates some $35 billion in annual sales.

It’s not the first time Trump has been accused of fraud.

He agreed to pay some $25 million to settle several lawsuits shortly after his election. Among those filings was related to his Trump University, a for-profit training program that claimed to sell access to the business tycoon’s real estate secrets.

He was also sued over his dealings with the Trump Network for having acted as though he owned the company even though he was only tied to it via a licensing agreement that allowed the group to use his name.

Trump cut ties with the group in 2011 as business slowed.

Featured Photo: AFP/File / Timothy A. CLARY. Donald Trump along with his children Eric(L) Ivanka and Donald Jr. have been named in a lawsuit accusing them of fraud.